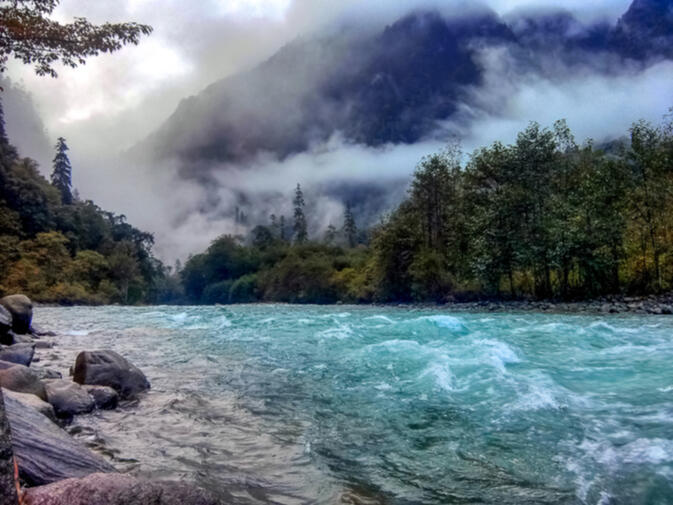 Four regions in southern and central China — Guangdong, Guangxi, Henan and Yunnan — have been singled out by the national environmental protection agency for failing to live up to the dictates of President Xi Jinping's 'war against pollution'. The charges go beyond a simple lack of enforcement, with a related government report stating the provinces provided "superficial" and "fake" assessments for some of their current conservation efforts.

The admonishing review was issued October 22 by China's Ministry of Ecology and Environment (MEE). Once known as the Ministry of Environmental Protection, MEE bears the enormous responsibility of regulating the quality of the country's air, soil and water. The ministry's recent publication reproaches the four regions for using only the most "perfunctory" efforts to diminish pollution and safeguard the environment in some situations.

Regarding livestock, the situation is much the same. China's soaring demand for pork and chicken has led to the rapid expansion of Yunnan's poultry and hog farms. Unchecked by regulators, many of these agricultural producers have not upgraded their waste management facilities and consequently end up dumping untreated waste into water sources, according to the MEE report.

In the dozen's of protected natural areas dotting Yunnan's mountainous topography, mining remains a more pressing concern, however. Many of the province's wilder alpine regions are heavily forested, unconnected by major roads or highways and therefore difficult to access. Yet illegal mining operations exist in these out-of-the-way places — some inside UNESCO-protected areas — with tailings and other debris often dumped directly into nearby rivers.

But the MEE report does more than single out small, unsanctioned mines. Concerning much larger but unnamed corporations — which generate the largest portion of GDP of any economic industry in the province — MEE investigators state:

Only 15 of the 173 [licensed] large-scale non-ferrous metal producers in the province were included on a list of firms in compliance with industry standards. Additionally, many smaller outfits were found to have illegally expanded and were discharging contaminants without permits.

In Guangdong, Guangxi and Henan, the most severe problems arose out of worsening air quality, the importation of banned waste from other countries and the failure to spend money granted by Beijing to conserve wilderness areas. The news was not all bad, however. Yunnan was lauded in the MEE findings for maintaining and expanding the highest percentage of "forest coverage" of any province in the country, as well as "improving the overall water quality" of its transboundary rivers.

Problem of phony provincial and local assessments described in Elizabeth C. Economy's 2004 book, The River Runs Black, which covered the situation in other provinces as well. Are things better overall now? Well, very obviously thanks to the production and widespread distribution of private automobiles, among other factors such as massive construction, anybody who's lived here during that period cannot possibly fail to notice the worsening air quality in Kunming. She mentioned illegal logging as well, both in Yunnan and in Myanmar, to provide for construction, as well as the situation of water. The problem, at that time anyway, seemed to be not micromanaging from the central government, but the devolution of responsibility for carrying out central government plans from the center to the provinces. Might this have something to do with expanding privatization and 'cooperation' between local government and developers? Golly, I wonder.

Many government workers in (parts of) Yunnan have had their weekends 'cancelled' until mid-December in an effort to deal with this mess.

While this is nothing new, having it called out is.

A dozen years ago, while wandering around Hainan taking photos, I took photos of a factory spewing pollution into the air. Back in Beijing I mentioned this to a friend who was an official at the old Ministry of Environmental Protection. She said "There are no factories in Hainan." When I told her I had photos, she shook her head and repeated, "There are no factories in Hainan," adding, "There can't be any pollution in Hainan."

Having it called out probably means you call out one of ten in order to hide nine,

Me got shocked - around five years ago - when Jack Ma announced the idea of some kind of home kit tool (do it yourself) for testing pollution to sell on alibaba, He talked about the right for this knowledge etc.

The was like when Dylan picked up the electric guitar - wohoo - what the h-ll this drama can bring about.

Well, havent heard of it ever since. Strange. Jack Ma ...... heh. Dig the rest up yourself.

Btw. I do understand that my comment can be "sensitive" now, probably even angering our laowais who seem to have adopted very well! Heh.

Got curious about this now again, being on this nostalgia visit in your community. It was in 2014 and SCMP wrote this:

"Alibaba Group Holding, the e-commerce giant founded by Ma, is asking the public to participate in mapping water quality across the country to raise environmental awareness. With palm-sized testing kits sold through the company for about 65 yuan (HK$82), volunteers can measure pollutants in freshwater sources and upload the data to a digital map via smartphones. The programme, still in its initial stage, may prove to be a test of the government's resolve in cleaning up the environment."

So what happened with this program? Why is Jack Ma not talking about it anymore? I wonder if he was a revolutionary of some kind. But like Orwell said on Asia: theres always a plot behind a plot.

Ssshhhh... (whisper). Do you guys get it what Im thinking about? Cant really say it loud these days.