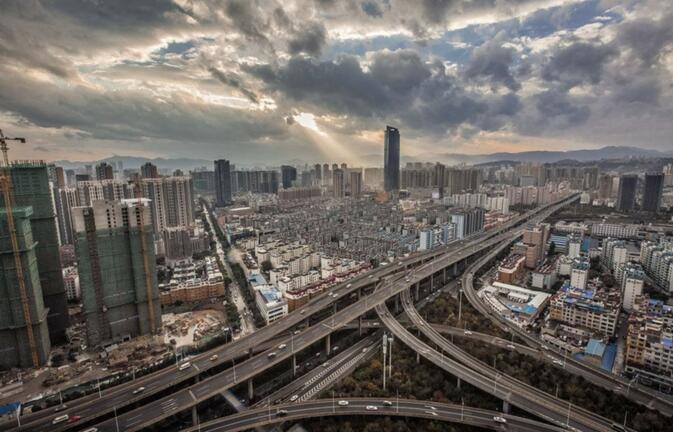 Add another entrant to the enormous list of Spring City construction projects. Citing a vague need for "improvement", radio station 91.8, 'The voice of Yunnan traffic', announced this week that two parts of Kunming's elevated Second Ring Road will be closed down at different times this year as work crews resurface roadways and check for structural problems.

The first section of highway to shut down runs from west to east from the Guannan Interchange (官南立交桥) — where Xiba Lu (西坝路) and the ring road intersect — to Dabanqiao (大板桥), which sits just north of Daguan Park (大观公园). Between these two points, traffic will be barred along the South Second Ring Road beginning June 22 and lasting until October 24.

As work on the just-mentioned portion of the road winds down, a second section will close heading in the opposite direction. The closure will begin at Guannan Interchange and extend east for almost three kilometers to the Shihuguan Interchange (石虎关立交桥). This stretch of road is expected to be closed from October until sometime during Spring Festival 2019.

The total length of highway affected is just over six kilometers, and police expect the residual traffic mess in Kunming's Xishan District will "have a major impact on people's lives". In an effort to reduce some congestion, much-maligned urban management officers will be recruited to help regular traffic police with illegal parking and sidewalk vendors in surrounding neighborhoods.

People living in or traveling through the "affected areas" are encouraged to "choose green transportation options including the subway, buses and shared bicycles" to reduce traffic levels. To see a complete list of bus lines affected, as well as suggested detour routes and other details, in Chinese, please follow this link.

The Second Ring Road was originally fully linked up in 1998. A decade later during the domineering term of municipal Party secretary Qiu He (仇和), the entirety of the road was elevated and turned into a highway in less than a year. Those were the heady days when Kunming was adding up to 1,000 new vehicles to its streets each day, which may go a long way toward explaining the current need for maintenance work.

Special thanks to Jeff Crosby for bringing this story to our attention.

'Development' should be considered carefully. The introduction of all the private cars made a mess of the streets. This necessitated the construction of the Metro system, which further clogged up the streets...

If you are creating messes 7 years out of 10, then most of the time there is a mess. While those who develop messes make profits from the development and are further empowered to plan more messy development. But their goal is... Progress, right?
SOME of it is indeed worthwhile, but leaving developers to decide what is Progress on their own... what's the goal here?

If they had finished the proposed metro lines first, this would not have been so bad. People could have more easily got to work, or where else they needed to be.

and when they finish this, will they do the east section for 200 days, then after that the west? and then the north?

These are major works. I would not be surprised if they find faults with the roadway that will require some reconstruction leading to delays in completion.

May 11, 2021 "Summit Language school is looking for qualified and enthusiastic teachers to join our team starting as soon as possible. The school is location in We …"
Living in Kunming AlPage48