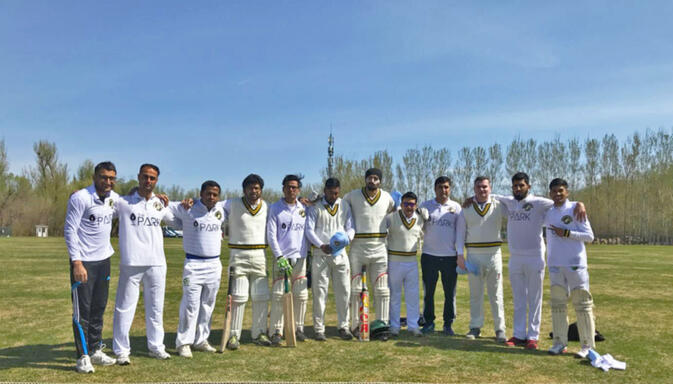 The Yunnan Cricket Club (YCC) returned defeated but with heads held high after our recent three-day tour to Beijing. We had been invited to play matches against representative players from the Beijing Cricket Club (BCC) over the Tomb Sweeping holiday, and it proved to be a very enjoyable series of games, as well as great step forward for our club.

The tour got off to an inopportune start as Beijing, having had weeks of sunny weather, was suddenly and unbelievably in the grip of snowfall, sleet and heavy showers as we flew in on Wednesday night. With around two inches of snow on the ground, it was doubtful whether we would get a game.

The Beijing Club play at the Dulwich College sports ground near the airport and the match officials did well to get out there and clear the field of snow in the early morning. They then delayed the start to let the field dry off a bit, after which we could attempt a match in the shortened form of Twenty20. We had come all this way to play cricket and after the miserable washout of our previous tour to Thailand, we were just delighted to get any sort of game underway.

Yunnan lost the toss but were surprisingly and very generously put in to bat. However, the all-weather mat was still soaked and the ball was skidding and making life difficult for our opening batsmen. The tall Bangladeshi fast bowler, Zashid Malik Leo, was getting a lot of bounce early on and struck Shamsur Bappy, aka Bappy Senior, a painful blow on the hand.

Several more demon balls whistled past Bappy's head until he was caught on three going for a big but frustrated shot over the top. Despite these intimidating balls, the freezing conditions made for some very loose bowling overall and gifted YCC 40 extra runs and the scoreboard sat pleasingly on 37/1 after just two overs.

Our exciting young Nepalese batsman, Krishna Gopal Yadav, started positively in the bitter cold with some classy and confident stokes putting us in a strong position with 48 from 34 balls before getting out leg before wicket. Next in was Anwar Umair with a total of 7 before being caught. Then came our big hitter, Adnan Barcha, with a knock of 46 not out, including six 4s and one 6, alongside acting-captain, Arslan Jamil, who hit his first ball for four and played two reverse sweeps to end on 23 not out. After 20 overs at the break, we were sitting on a commanding score of 167/3.

After lunch, the sun timidly began to show itself and dry out the pitch, but our bowlers similarly leaked an unreasonable amount of extras. The game looked to be in the balance with some good scores from the Beijing number 2, Matt Richmond, hitting a skilful 51, and the number 4 from New Zealand, Liam Corkery, with an accomplished 37 not out. It was a decent response from our opponents, several of whom are members of the local Beijing Ducks side, the rest of which were in Thailand playing in the Chiangmai Sixes tournament.

The turning point in the match came in the 16th over when we brought on our spinner, Bappy Senior. He bowled with some much-needed accuracy and economy to nullify the Beijing batsmen. Then Yunnan's paceman, Sajid (Sami) Mehmood, and Arslan Jamil continued the tight bowling in a professional and assured display to close out the match, restricting Beijing to 153/4. And so the Yunnan Cricket Club in a joyous moment, against the odds and against the weather gods, had won our first match by 14 runs. 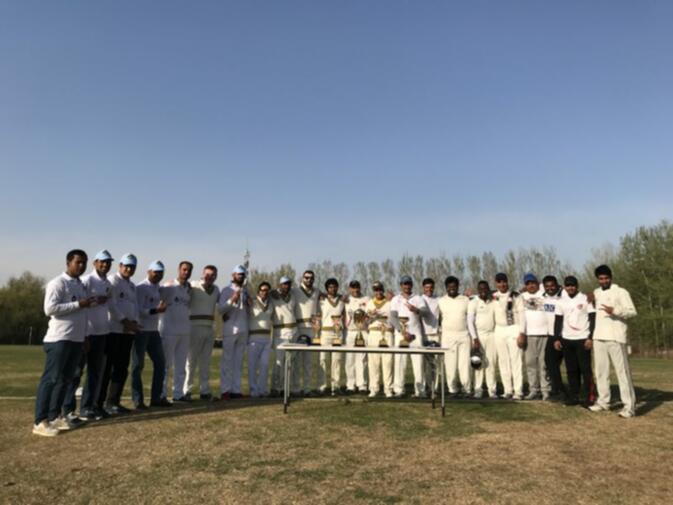 The following day was windy, overcast and very cold again. This time we were playing the full 30 overs against the cream of the Beijing team. The opposition won the toss and elected to bat. Hafiz Abduljabbar, capitalizing on some loose bowling, fired 81 from 31 balls before being caught on the boundary. Hafiz smashed some big shots including nine 4s and five 6s, dispatching Sami and our medium pacers with ease. With Beijing reaching 132 before the fall of their first wicket in the tenth over, it was a disheartening spell for Yunnan.

Again, it was only when we opted for spin that we started to gain some control over the scoring. But, we could only slow the opposition down briefly and any impact on the run rate was too little too late. All of the Beijing top order scored solidly with Javed stumped on 47 off the bowling of Umair, and Saeed scoring 71 from 41 balls with wide a range of shots, including four 6s before being caught off the bowling of Dawood Khan. The home side set us a daunting target of 310 to win.

YCC came out fighting after the break with Barcha, Gopal and MD Jahid Hasan, aka Bappy Junior, scoring 21 apiece. But the consistent bowling of the BCC captain, Mustafa Kasmani, reined us in, while the pace and swing of Elvis and Barbar felled our batsmen within 26 overs. Our Captain, K Saadiqul Khandker, and Arslan Jamil only managing to steady the ship for a short time in the middle of the innings.

In the end, it was a practically impossible chase against a superior side to the previous day. But at least we could look forward to an excellent meal and drinks hosted by the Beijing Club President, Ian Syer, that evening, as well as the prospect of a final match the next day — one in which we had the chance to acquit ourselves in a better manner than we had. 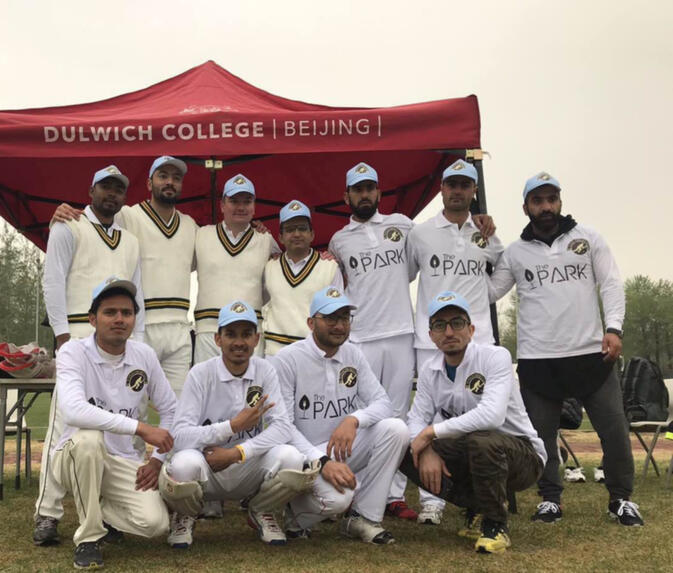 Saturday was much sunnier and the home team lifted the atmosphere by blasting music onto the outfield from the sidelines. Saadiq had won the toss and opted to switch up the order and open the batting, with Barcha and the new addition of our left-hander from Nepal, Manoj Bhatta, in order to make things more difficult for the bowling side.

However, Manoj was out for nought and his brother, Gopal, followed suit with just 1 run. With the innings looking precarious, Saadiq and our all-rounder, Bappy Junior, entered the stage. The two boys from Bangladesh scored 41 and 67 respectively. Bappy took a few overs to get in, many times coming perilously close to nicking off. Our hearts were in our mouths as the fielders screamed appeal after appeal. But when he did get in, what a knock it was! Proving pivotal to our innings and creaming shots around the ground including a 6 that crashed onto the roof of the home cabin.

With Mustafa bowling on a good length and taking the wicket of Umair, Saeed followed up with two wickets in an over. Then finally, Bappy was run out off the bowling of Hafiz. It was a valiant innings, but in leaving a target of 200 we were left slightly deflated and wary of what was to come.

After lunch, Beijing rapidly set about the run chase. The ongoing theme of unfortunate fielding continued to plague Yunnan with a collision of two players going for a catch and some high balls missed, as well as Dawood dropping a catch off his own bowling. Not to be phased, Saadiq took a great catch at mid-on to dismiss Hafiz for 39 off Bappy Junior's bowling. A breakthrough then came in the 16th over when Bappy Junior again took a wicket, this time Saeed for 1.

With Beijing's two big guns gone, there appeared a large ray of hope for YCC. But it was not to be, as Beijing's experienced middle order pairing of Safdar and Kavi, benefiting from a quick outfield and some tired bowling, comfortably knocked off the total with four overs and five wickets remaining. 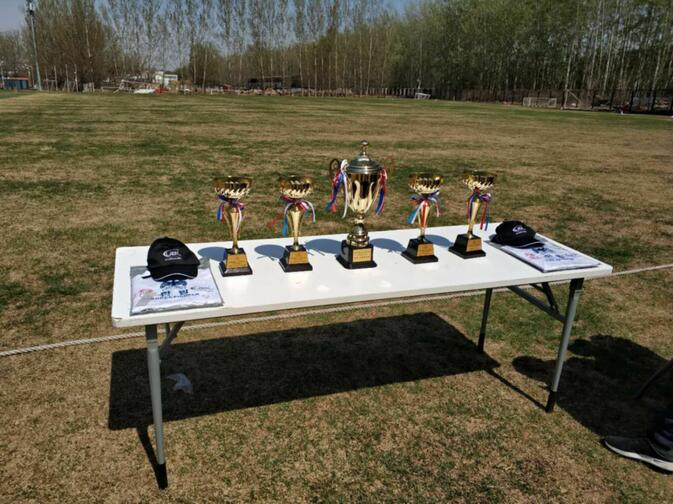 Despite our losing the inaugural event in what promises to be a regular fixture, the tour felt like a great success. It was an invaluable experience for our boys to travel up there, to compete and to give a good account of ourselves. We all learned a lot in the process and we were genuinely delighted with the respect and kindness shown to us by all at the Beijing Cricket Club.

Three of our players, coincidentally all from Bangladesh, were presented with awards. The Best All-Rounder trophy went to Bappy Junior, the Best Bowler to Bappy Senior and the Damian Johnson Fair Play Award went to Saadiq — the late Damian Johnson being a pioneer of cricket in China. While on the opposition side, Hafiz lifted the Best Batsman award and Mustafa the first BCC-YCC Trophy.

It was a superbly organized competition and we all made a lot of friends. As such, we at the Yunnan Club can think of nothing better than to return the offer and host Beijing CC here in Kunming as soon as we can, and to continue in our efforts to put Yunnan firmly on the cricketing map.

If you are interested in joining the Yunnan Cricket Club, they are always looking to develop and expand the team. A trip to play in Malaysia later this year is in the offing as well. Inquiries should be sent to Luan Hanratty through WeChat. Search for ID 'Luan_H' to get in touch.

Good to see the YCC expanding, being English and seeing kids all into basketball here is not too great. A little bit of encouragement from small clubs like this can help with sports diversity in the long run which can only be good, especially if you don't like basketball lol.

One day (if the fate of times shows mercy) I'll make it to one of their fundraiser curry nights ;o) Love a curry lol

sir i have a friend who is very good cricketer played for bangladesh's division level,currently he is now in kunming for his study. he is student of southwest forestry university in panlong. My friend is batting all rounder. i know he can play very well .

Thank you very much. I've contacted him.

Jon, the Curry Nights are great. You should definitely come to the next one

Hey. I am from Bangladesh. I used to play cricket in the division level in my country and I want to join you guys to enhance my game. It will be great if you accept me in your team. Thank you.

My wechat id is safin_rahman222