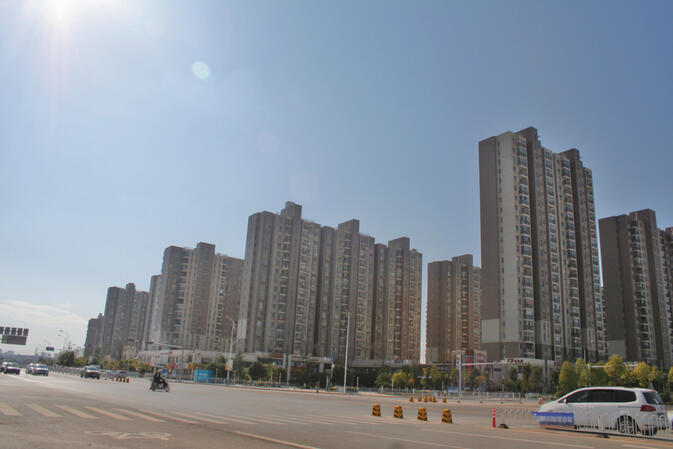 When I mention to Spring City dwellers that I live and study in Chenggong (呈贡), Kunming's southern university district, their reactions usually fall along a similar line — a mixture of both slim familiarity and vague sympathy. Much of this reaction is justified, being that the community is not known as being a place of much activity beyond the university work buzz that comes with China's traditional strict studiousness.

Living on campus during the oncoming Chinese New Year migration has brought ostensible dullness to my daily routine. There is virtually no one on campus, food options have slimmed, and most of my friends have returned to their home countries. Beginning January fifth, classes let out. However, during the peak of the semester, university life in Chenggong can be under-ratedly exciting and adventurous for reasons that did not exist only five years ago. 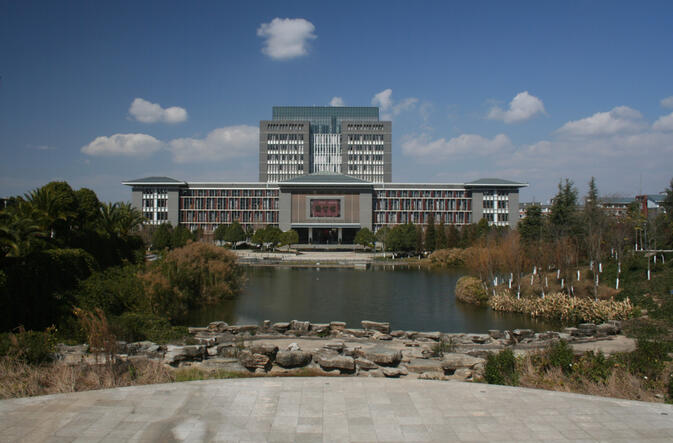 Yunnan's ambitious building of it's 'new city' began in 2003, previously the home of busy farmland and rolling mountains. Today, southern Chenggong is occupied by a cluster of seven colleges, each boasting their own flavor of architecture, academic departments and student body. Chenggong has become the epitome of a suburban university town as the area spikes in youthful activity and an influx foreign students interested in an immersive academic Mandarin experience.

In 2012, the BBC News listed Chenggong among China's largest "ghost cities," marveling at the empty shopping malls and the 100,000 new and vacant apartments. Today — during the semester at least — one has to go searching to find that kind of post-apocalyptic scene. 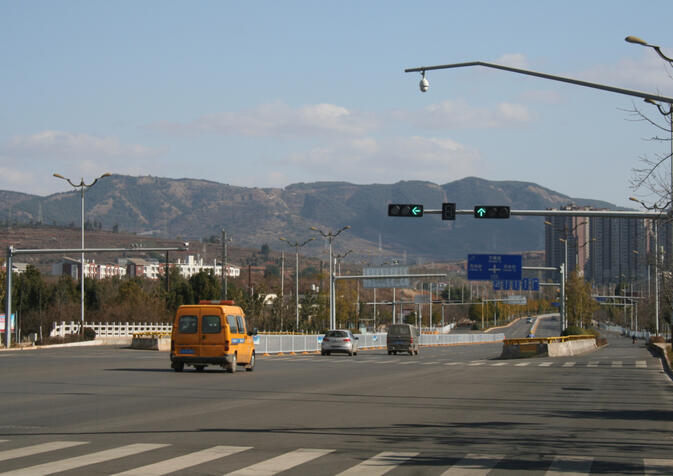 Shopping malls are stocked with international brands such as H&M and Zara. There are night markets, street food vendors and Chinese barbecue joints generally packed with young people on the nights and weekends. Movie theaters, public parks, bars, cafes, gyms, brand new sports facilities and proximity to the mountains for hiking all make decent pastimes when not preparing for exams.

Chenggong should, by no means, be known for its nightlife, but the few options for social debauchery are networking gems of their own, and make a strong breeding ground for friendships and connections. Bars such as 98 Bar and Big Fish serve as magnets to international students — mostly of Lao and Thai origin — from neighboring colleges that may not have met otherwise. Some of Kunming's best DJ's are featured at locations such as these, giving them access to slightly younger audiences. 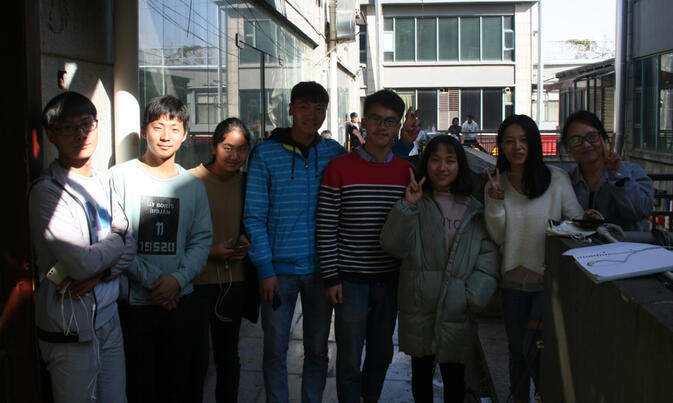 The international student community of Chenggong is vast in diversity and makes up a good portion of Kunming's foreign population. In just over four months of living down there, I have made friends from across the world — Spain, Pakistan, Thailand, Nigeria, India, France and many more countries. The ability to share both our cultures and notes on life in China has been one of my personal highlights. Being integrated with the Chinese student population also makes practice outside of class accessible if you are just willing to reach out of your native speaking circles.

Though Chenggong is still small in its own way, and the routine of going out will inevitably become repetitive, the feeling of being trapped is easily avoidable. Kunming's city center is only a six yuan subway ticket away from Kunming South Railway Station at the very bottom of the map. Rounding up a group of friends to fill a mianbaoche is easy enough when you can split the cost between seven people. Escaping for a day in Yunnan's capital city for exploration, good eats or shopping is a great way to break away from the usual. 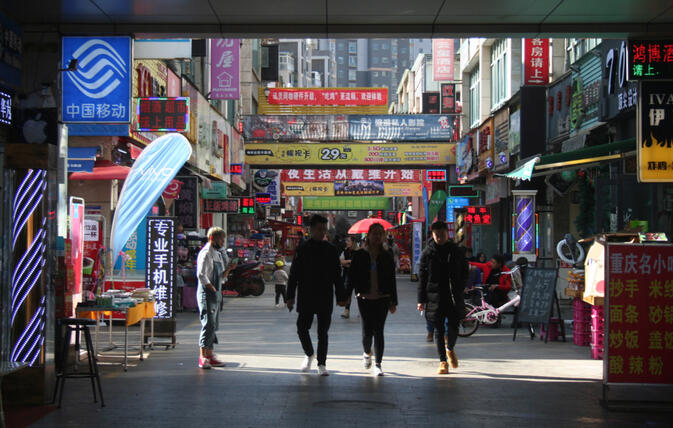 One word that comes to mind when I think of Chenggong is young. The population makeup is strikingly young, younger than what you might find in the city given the student population. Almost the entire economy of the city is centered around student activity.

Looking around during the winter break, it's almost hard to believe I am looking at the same town I was two months ago, during the semester. Now, the campus is empty, all my favorite food spots have closed, and I find myself looking down empty streets often. But contrary to the recent press attention Chenggong has gotten for being completely barren, university life here may surprise you, as it has me. 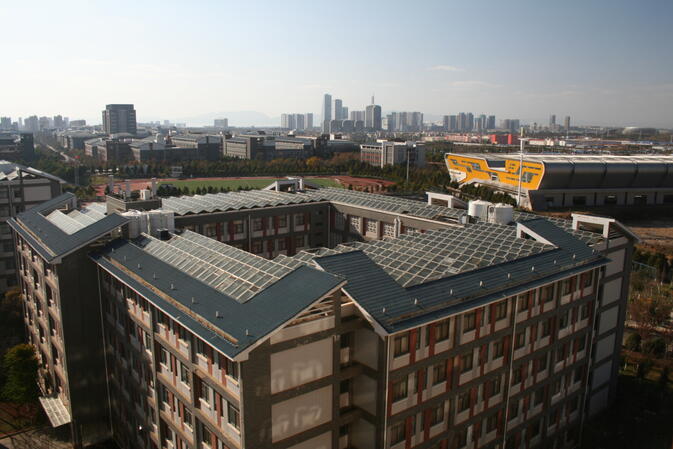 The second to last picture with all the shop signs actually reminds me of Hong Kong.

Perhaps off topic, but this is strikingly opposite of recent developments in first tier cities and in fact even our own apartment block in northern Kunming, where the authorities are forcing shops to remove excessive signs on the streets and in the walls - basically anywhere outside the immediate space the shops have leased.

For me, as someone who lives right by Green Lake, I always love heading out to Chenggong to visit my thesis adviser. There are tons of sprawling parks, it's easy to get out to the countryside, the air quality is higher, etc. I'd be very happy living out there. The main thing is that I don't particularly care for the night life scene, so living near the city center doesn't offer a whole lot of advantages.

Yesterday was my first time scouting Chenggong District. @Cahzriel is right, air quality is much better here than in inner city, Spaciously desolate, local businesses should be relieved college students will be returning en masse around March 4th through the 10th.

Absent in forum discussions, and not specifically mentioned by Jared Foxhall nor by Patrick Scally/Benjamin Campbell in the other Chenggong article, is Shilin Street Barbecue City, Shilin Street (仕林街) is a landmark of eateries stretching an entire block of nearly half a kilometer.

Highly recommended are the 28 yuan per person spicy Chongqing-flavored DIY stir fry buffets near the south end of Shilin Street (bordering JingMing S. Road). All-you-can-eat shrimps, clams, fish (for pescatarians like myself), marinated meats, and large selections of veggies cooked on a giant pan at your table for only 28rmb is nonexistent in KM city center.

Just a heads up, passengers on the KRT train en route to Kunming South Railway Station may have to get off and switch at Chunrong Jie (春融街) for the university town stations. This juncture may be confusing for first-timers.

I forgot to include those delicious calamari/squids in my aforementioned 28 yuan buffets.