By Anna Novikova in Features on September 15, 2017 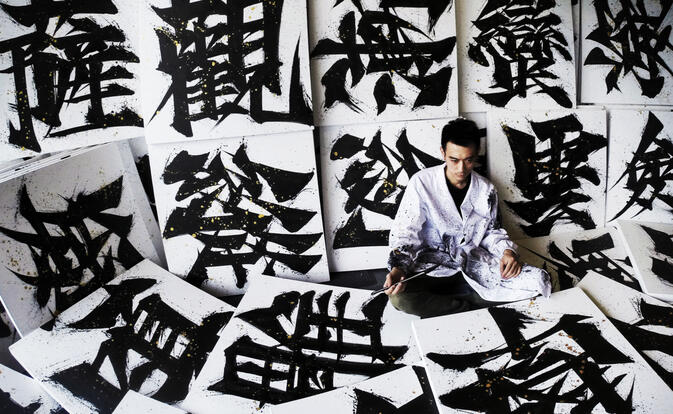 Kunming's art scene is hard to pin down. One never knows who or what will turn up. A good example is Kunming local Dong Hai (東海). He is an emerging artist living and working in Xishan District while preparing for his first big solo exhibition. He has lofty aspirations, preparing more than 700 canvases, each painted with a single Chinese character.

Using these, Dong Hai plans to construct a large-scale installation called Everlasting that will open to the public September 19 at the IWE Art Museum in the Western Hills. By suspending the hundreds of individually painted words across all surfaces of the display space, phrases and sentences will emerge, disappear and otherwise transform as viewers make their way through the space. The display will also feature hip-hop music composed by Dong Hai.

Dong Hai has studied art in Italy, Tibet and Yunnan. His approach makes him popular with younger aficionados in Kunming, allowing him to collaborate with music festivals, independent studios and people with no obvious links to the art world. For his calligraphy pieces, Dong Hai uses traditional ink manipulated to look like spray paint, and takes inspiration as much from past norms as he does from graffiti culture.

As he prepares for the Kunming exhibition, Dong Hai found time to sit down with us and discuss his work, pushing back against deeply ingrained creative norms and what people can expect from his show. 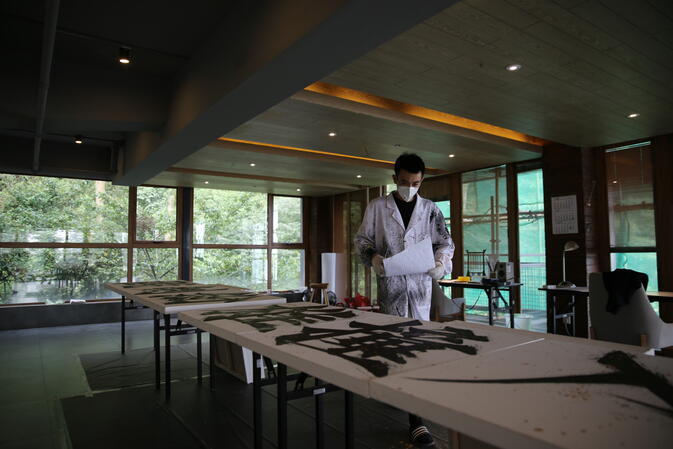 GoKunming: How would you describe yourself to a stranger?

Dong Hai: I guess I'm an ordinary person of two personalities. One is relatively calm and the other is more enthusiastic and cheerful. I am a bit contradictory. On one hand I love hip-hop music and culture and to create graffiti, but on the other hand I absolutely love calligraphy and making traditional Tibetan thangka.

GK: Can you explain your artistic style, or point of view?

Dong Hai: I think I'll let other people do that. For me, making art is a process involving constant exploration. If I say I belong to a certain style, that means I've stopped growing creatively. If someone thinks that I have a certain method, all I can say is that it's what I'm doing now. Currently I'm using elements of calligraphy — specifically the words. I believe that my personality and other hobbies fit into my art. I like the way it's so direct and doesn't have much decoration or framing. To me it's perfect just being black and white, horizontal and perpendicular. 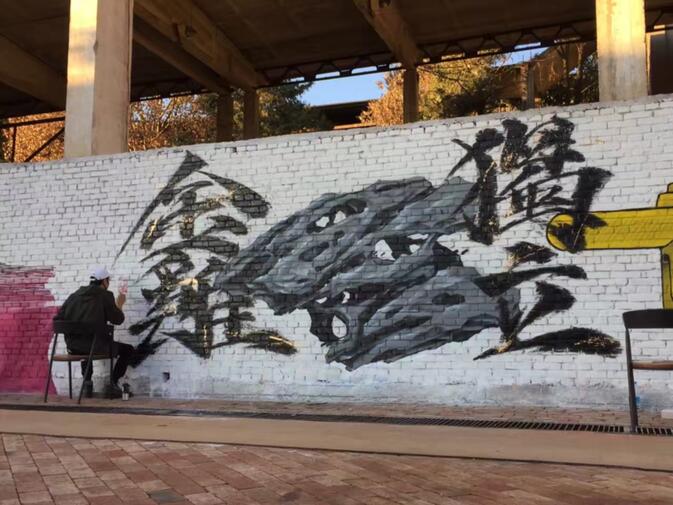 GK: Your calligraphy is intentionally non-traditional. How did you come up with this approach?

Dong Hai: I was asked to make an art piece for the National Roman Musem in Italy while participating in a collective exhibition of international artists. When we were preparing, I looked at other people's pieces and realized that I don't see any cultural background. I couldn't see their roots in it. At the time, I thought I should use something special from the East that would include my ideas.

It needed to be something extremely personal, so I chose the element of calligraphy. I created a series I called Prajna paramita [the Mahayana Buddhist concept of seeing the true nature of reality]. I haven't studied calligraphy formally, so I felt a tremendous amount of freedom during the creative process — I didn't have a dogmatic mindset or put any restrictions on what I was doing. It made me feel more relaxed, like I was able to directly express myself. I've kept this approach ever since. 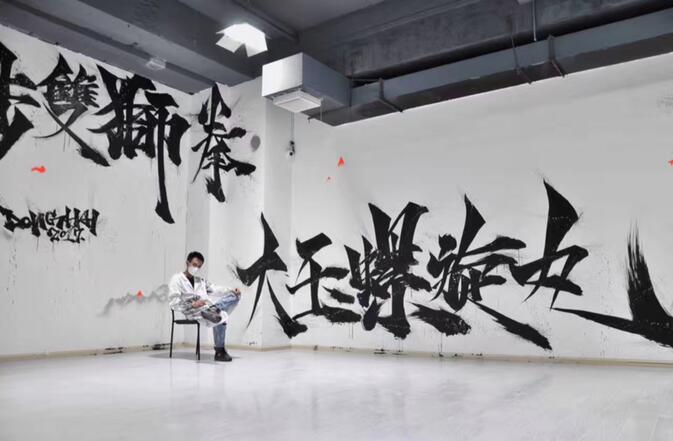 GK: What do older calligraphers think about your work?

Dong Hai: Of course traditional calligraphy masters question my work. They all have their own different opinions. Some say I do calligraphy, some say I create shit. But I like it because there is this spirit of revolution and evolution. I like when they get mad at me and say that I'm ruining tradition. It really gives me a push forward.

GK: What are you trying to express through your art?

Dong Hai: I think that each of my works expresses something different. Plus every viewer's understanding is of course different. What I'm trying to do is to ask questions and make people think more. Expressing something is like giving answers, telling stories. I want people to tell their own stories through my art pieces. I don't like very transparent art myself. Instead, I'm trying to give people a starting point. In return, I expect them to draw a line from that place themselves and hope they are able to extend the line toward bigger considerations. 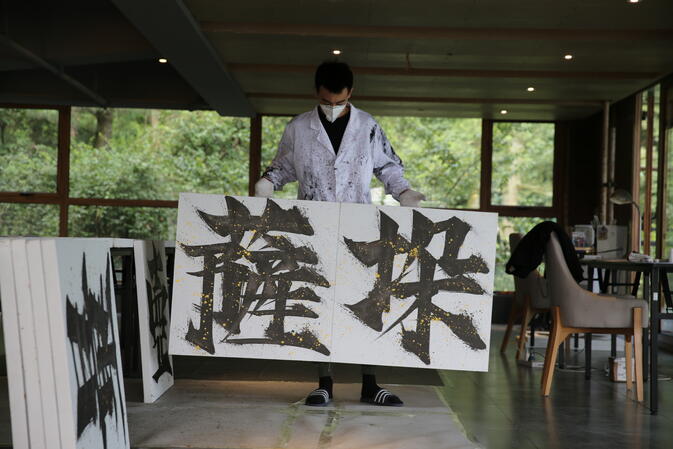 GK: Why are you focusing on installation art?

Dong Hai: I see how the audience for Chinese art is changing and seeing art differently. People no longer think it's only oil paintings and sculptures. I'm a young man and I want to do new things. Considering installations, they can combine paintings, sculpture, light, music and so much more. So for me this form is deeper, more interesting and has far more impact than other mediums.

GK: Is there a direct connection between your art and music?

Dong Hai: Oh yes. See, to a Chinese person, calligraphy is a very implicit thing — a part of our culture and history that is simply a given. What I'm doing now is using calligraphy to show younger people that it can be modern, cool and trendy. Hip-hop culture can be very cutting edge and avant-garde and, just like many other young people, I like it. It has a meaning and a specific cultural background. So even though I do something traditionally Chinese, I try to incorporate a street style so young people will be more interested in it. 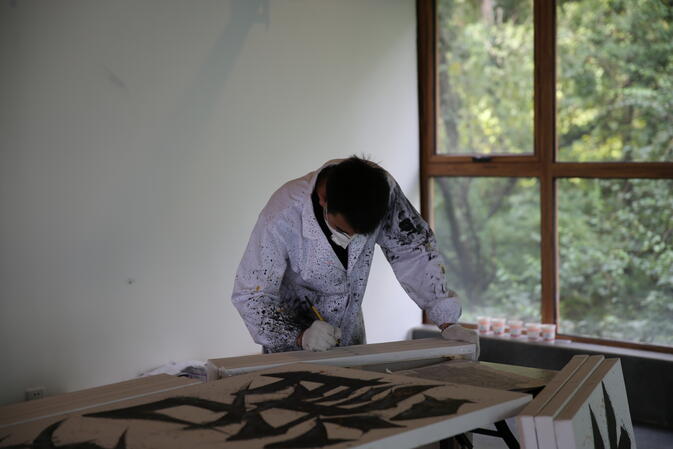 GK: Can you describe your coming exhibition to our readers?

Dong Hai: It's very modern. I tried to reflect, in a real way, what people are experiencing in their lives these days. It's has ancient roots but is chaotic, hectic and changing as you view it. I hope it has a connection for everyone. It's a spiritual thing through the prism of everyday life — of my fragmented life. Like in the ancient Chinese poem Li Sao [离骚], I separated my content into three parts — style, elegance and speech. But it's better to see it than to read about it, so I encourage everyone to come and check it out.

GK: Do you think that some foreigners with a limited understanding of calligraphy will appreciate your art and, is it important for you that they do?

Dong Hai: It's important to me. A good art piece has it's own language. I want to show people my art, which I don't think is just specific to Chinese culture. Actually, for me, art is a very ordinary thing. It's free and open. Some people make art and try to influence culture as a prestige thing. They say Paris is the world art capital, or New York City is. But actually art doesn't have a capital. I want my art to belong to the world. I think I am a Chinese artist with international views [laughs]. 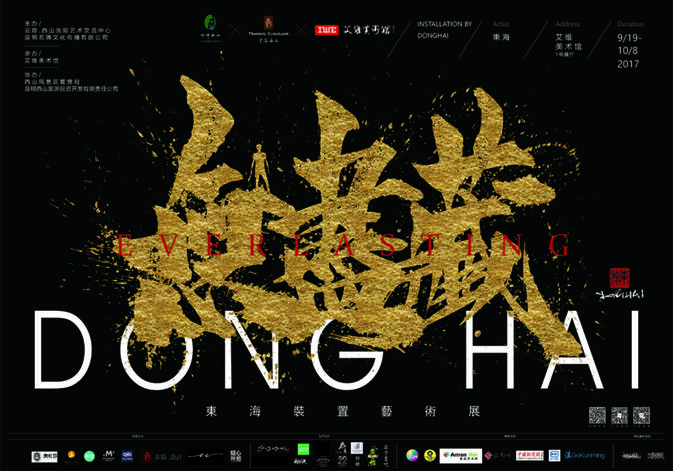 The opening ceremony is on Tuesday Sep 19th 3-8pm. If you want to see the exhibition first (before it's crowded with tourists), listen to electronic music live concert and simply spend a nice day up on Western Hills, send me message on the website and I'll try to get invitation for you. It's a closed party, but, you know, guanxi rule!

Looking at his calligraphy the guy seems very talented. Very captivating those characters of his, seeing the photos was enough, didnt even bother the interview. We will probably hear of him more, if he stays away from drugs, and hopefully also far away from Western mainstream psychpathic decadence.

@Peter: You're worried imagining that he has potential drug problems???

Well... it was just intuition saying that since he is that talented, and still young, the freaks may be lining up around him. With their decadent formulas. Apologizes if it could lead to misunderstanding, wasnt meant to throw any bad light on the guy.

You would know what I mean, Alien, if you had been on the talented side, but you were on the other side. :)