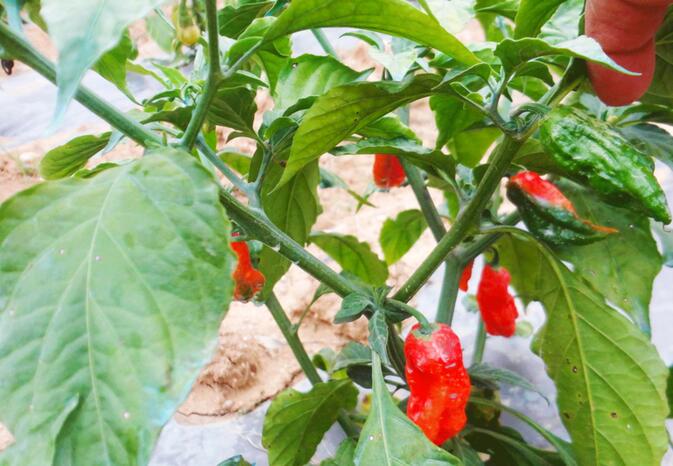 Yunnan chilis can be spicy, sometimes extremely so. However, for a small company operating near the provincial capital, regular peppers simply are not hot enough. So, for the last several years scientists have been working hard to create what they believe is the world's strongest super pepper.

Yunnan Honglü Capsaicin (云南宏绿辣素有限公司) operates experimental chili farms in Xundian County (寻甸县), about 90 minutes by car northeast of Kunming. When harvest season rolls around, workers picking the company's bright red hybrid peppers must wear protective clothing, especially over their hands and faces. Even a small smear of oil accidentally squeezed through a pepper's skin can cause minor chemical burns and what Honglü researchers say is "up to six hours of serious physical discomfort."

Physically, this new breed of pepper looks no different from typical versions grown in Yunnan that resemble scotch bonnets or habeñeros. But that lack of apparent difference is quickly dispelled if anyone is foolish enough to try and eat one. The current hottest pepper in the world — measured using the Capsaicin-based Scoville Scale — is the Indian ghost pepper. Honglü researchers believe their chili is "two or three times" more caustic. In fact, the devilishly spicy monster so far has a simple and to-the-point name — 'industrial pepper' (工业辣椒).

It is not being grown for either "human or animal use", according to company literature. Not surprisingly it is instead being developed for use in pesticides. But other, less obvious, applications may exist. Developers envision the pepper being utilized as an additive to the plastic coverings of electrical cords, which they believe will deter pests such as rats from gnawing through cables. Promising research is also underway using extracted pepper oil in boat paints to discourage micro-organisms from eating away at hulls.

Whatever the future may hold for Honglü Capsaicin beyond capturing the title 'world's spiciest pepper', sales are so far excellent. The company's experimental plots already earn two or three times more than similar-sized tobacco fields, meaning incomes of up to 50,000 yuan (US$7,500) per acre. Convincing farmers to switch to a cash crop that could bolster annual incomes significantly should not be terribly difficult, as long as production contracts come with a hefty pair of safety gloves.

Interesting, but I have to wonder what the effects to the soil will be if/when peppers fall from the plant and rot into it. There are a lot of small organisms and animals that provide vital functions to soils health. It might be organic, but it is still potentially toxic.

Was excited to someday try a nibble—until I learned it would probably kill me.

could be useful for elephant crop invasion disuation.

I like the little yellow chilis from Hainan and Thailand. But these rate at only 150K SHU.

For my knee pain I use a Capsaicin topical cream that must be applied with protective gloves.

Hopefully the Yunnan Honglü Capsaicin company will get a Scoville heat unit test done for this chili pepper.