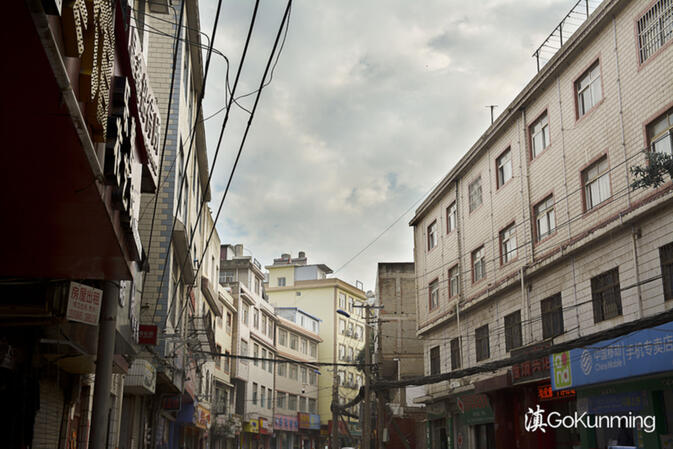 You've probably heard the term 'urban village' (城中村), but have you ever been to one in Kunming? Like many other big cities in China, these neighborhoods have been rapidly demolished to clear space for new high-rises. During the constant rain this month I dove into Kunming's urban villages and started my summer exploration as part of a team supported with a grant from Davis Projects for Peace.

Kunming's Wangjiaqiao urban village (王家桥村) is located off of Puji Lu (普吉路) close to the city's Northwest Bus Station. There reside not only local tenants but also thousands of immigrants from the countryside, many of them from ethnic minority groups. Consistent with many of the stereotypes surrounding urban villages, Wangjiaqiao lacks important infrastructure features, including in many places street lights, showers and even toilets. It is highly populated but has very limited space for each family to live. 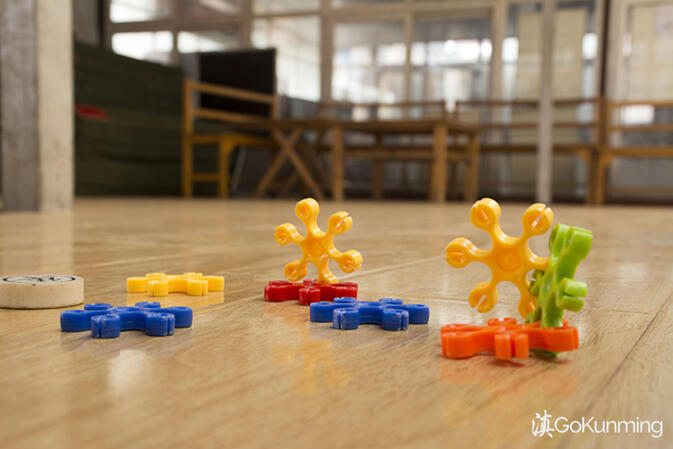 Nevertheless, an oasis for children hides in this place. It is actually the offices of local NGO Yixin Youth Center (益心青少年中心), the staff of which cater to the needs of children living in Wangjiaqiao and other nearby urban villages. Walking down the dim streets, it's pretty hard to locate where Yixin is. Once I found it, walking into its narrow little door, I was amazed to find a world totally different from the outside. The spaces is occupied for all sorts of different uses — reading rooms, a play area and section just for resting. The place is always crammed with kids reading books, playing ping-pong or just playing with toys.

Affiliated with Heart to Heart Community Care — one of the largest and the most influential local NGOs — Yixin has a well-established daily schedule with a fairly sufficient staff and resources. However, not every kid living in this area or nearby is able to come. Some are too young, others lack the access to necessary transportation, while some are just unaware of the organization. 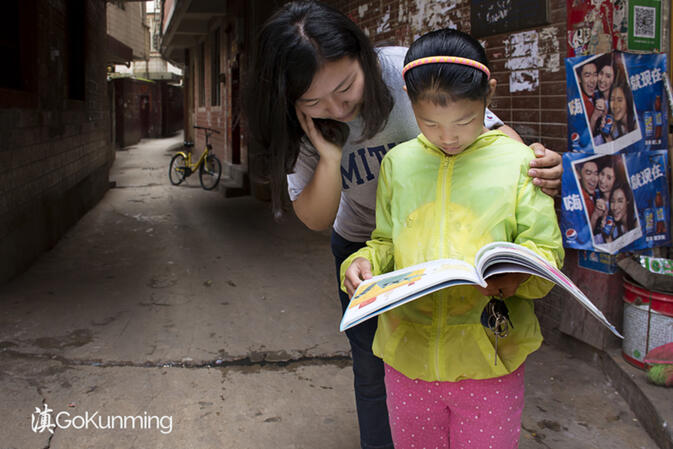 Thus, in order to benefit more children in need, Yixin initiated a 'micro-community' program where staff and volunteers are sent to nearby areas for off-site programs. As newcomers, me and my group joined this program and visited a nearby neighborhood called Puji Village (普吉村). It was our first week and we had no idea where we were going. Puji has no presence like the Yixin center and kids there often wander around on the street and seem to be more guarded and less open to strangers.

To break through, we first organized an event where we taught the kids to make sandwiches. We went to Puji on an afternoon when the rain was pouring down madly, as it had for the past month. To our surprise, many of the kids knew what sandwiches were and what was needed to make then. Before we jumped into teaching them how to make a 'simplified' sandwich of cucumber, ham, and bread, we had a small English lesson where we taught them how to pronounce related vocabulary words and practice phrases that are needed to buy food. 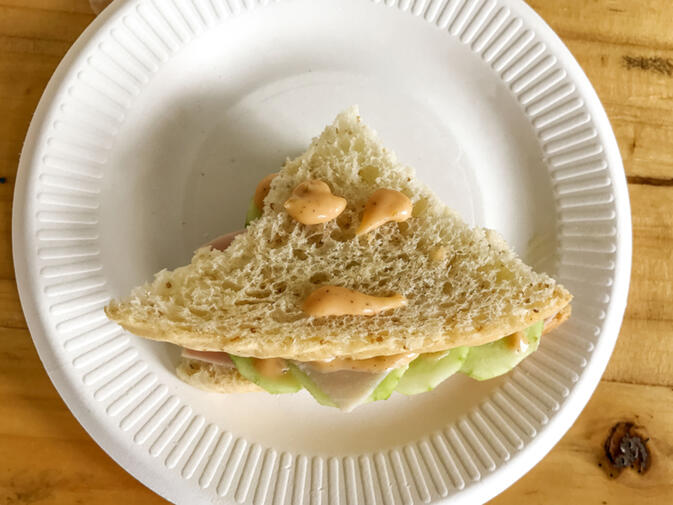 After this, we demonstrated how to make sandwiches and then let the kids do the rest on their own. We had prepared ingredients sufficient for 50 people, but only 20 kids came to our event. However, the ingredients were gone before we even realized what happened. Some of the kids had made some for their smaller siblings or parents, while others gorged on sandwiches they had made. We were excited to see their excitement but also anxious because we guessed that many of the kids usually did not even have lunch at all.

On the following Saturday we went to Puji again. This time, we brought ukuleles. We gathered outdoors and the music immediately attracted a group of kids as they rode by on "their" Ofo bikes. Though only two kids were willing to learn how to play Twinkle Twinkle Little Star, we made a small concert. The following days we spent with kids went by especially fast, more quickly than we had ever expected. 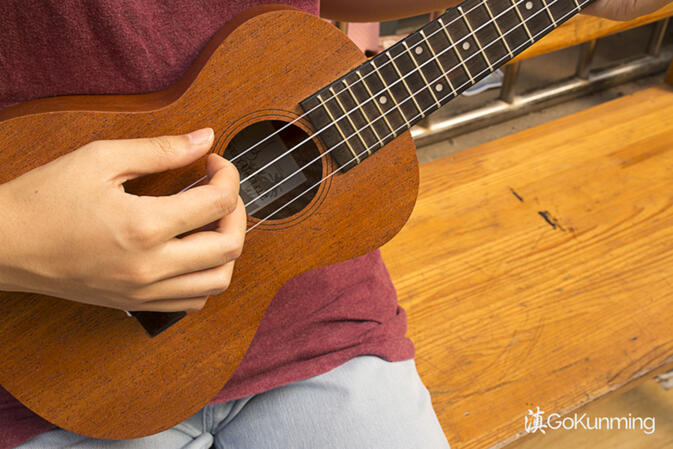 I often ask myself the meaning of things. In this case, it was the usefulness of what I was doing in Kunming's urban villages. I will leave the kids once I finish the project and maybe I won't have the opportunity to come back. And I only have limited resources and energy to devote to philanthropy. Thus, at times I felt helpless and powerless as I doubted whether my efforts over such a short period of time would truly be helpful to the kids or help shape their lives.

I have no way to evaluate that so I will probably never know the results. Nevertheless, I was told by an Yixin staffer that "Accompanying the kids is what matters most because maybe one day when they grow up, they might remember that there used to be a big sister or brother who stayed with them for a short time but who they loved wholeheartedly". Though my time at Yixin will soon end, I believe that my team and I will soon be somewhere else doing the same thing.

After all, it's taking the first step that matters the most.

Author Li Murong is a one-time GoKunming intern who recently graduated from Smith College in the United States, where she obtained a degree in Psychology. She is spending her summer volunteering in her hometown of Kunming. 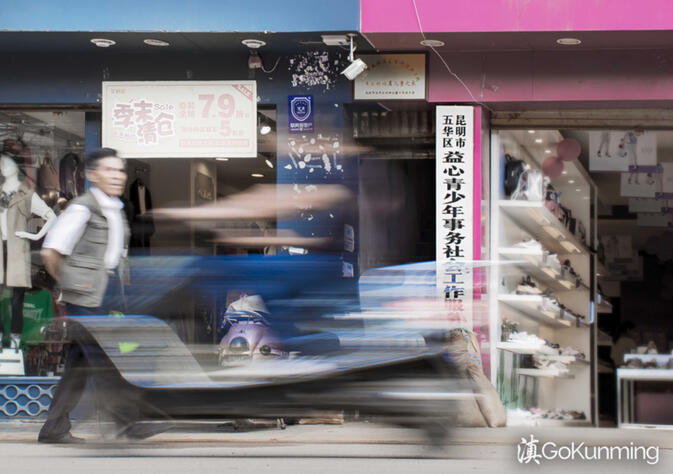 These kids are really poor, or don't get enough to eat (hence, teaching them...to make sandwiches?), or are orphans, or what? Do they go to school, during the normal school year?

These places are home to "thousands of immigrants from the countryside". Many of these families have extreme difficulty finding ways to register their kids to attend schools, much less pay for tuition. So no, many of them don't go to class.

As for the sandwiches, that was an introductory activity, what teachers call a 'warmer', to gain trust, establish comfort and make sure the kids come back the next time.

Sounds great to me.