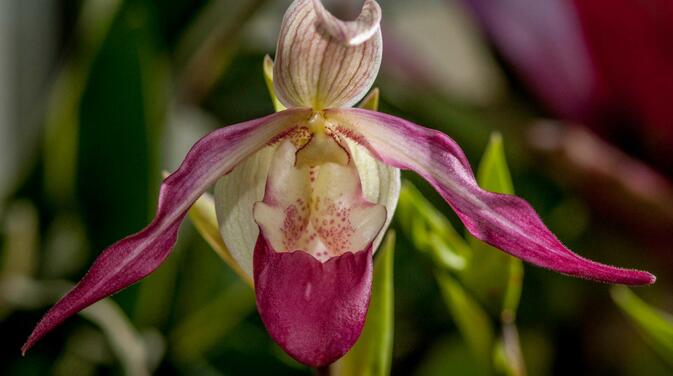 Yunnan is China's de facto plant repository, home to a higher range of biodiversity than anywhere else in the country. But many of the most delicate and sought-after flowers in the province — orchids — are under threat from a variety factors. Scientists in Xishuangbanna (西双版纳) are working to combat this through a combination of community outreach and breeding programs.

More than 400 species of orchids grow in Yunnan, fully a third of all of China's varieties. Over half of those growing South of the Clouds are considered rare or endangered. They are most abundant within the province's southern tropical rainforests, but some of the more robust types thrive in the mountainous microclimates of the north. Researchers at the Xishuangbanna Tropical Botanical Garden (XTBG) have identified what they believe are the most endangered flowers and are now selectively cultivating them in Jinghong (景洪) greenhouses.

There are four main reasons for the breeding program — conservation, research, propagation and education — according to XTBG botanist Liu Qiang (刘强). By breeding the plants, researchers at the botanical garden hope they can save varieties that are closest to extinction. Meanwhile, genetic tests are helping to reveal traits such as drought resistance and cold tolerance that may allow botanists to breed stronger strains.

The final two goals of propagation and education go hand in hand, Liu told reporters. Because the botanical garden can control growing conditions, it can often produce flowers much more quickly than those living unassisted in the wild. Once the orchids reach a certain point in their maturity, Liu and his team take them to villages near the research facility and give them to locals who have previously participated in conservation lectures.

Many of the villagers who take part in the XTBG program are quite familiar with orchids and their natural habitats. That is because they used to collect rare flowers — some of which fetch prices of more than 54,000 yuan (US$8,000) for a single plant — in order to supplement their annual incomes. Now, those same amateur plant hunters are involved in finding appropriate forest homes for the specimens propagated by XTBG researchers.

Successes and failures will be documented as the locals and scientists share information about how the greenhouse-grown orchids fair in the wild. The thought is that by creating a feedback loop involving both sides, preservation techniques will be improved and public awareness will increase.

Wang Ximin (王西敏), head of communications and training at XTBG, explained that the effort, if successful, will be expanded to involve more and more towns in Xishuangbanna. He summed up, "By involving the public, each person can realize their own role in the conservation of plant biodiversity. This [hands-on] way of doing things is much more profound than simply teaching theories."

I like how they involve the local villagers in replanting the orchids. That goes a long way.