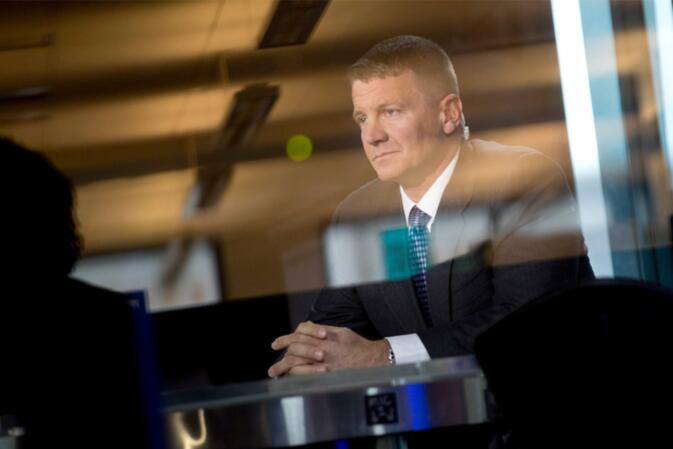 Erik Prince, the founder of private military contractor Blackwater, is bringing a new security and logistics outfit to western China. Although few details have been made public, in a recent interview with media outlet Global Times, Prince said the company he now chairs will soon expand its services to "include the northwest and southwest corridors of the One Belt and One Road initiative" — meaning Xinjiang and Yunnan.

Frontier Services Group (FSG) provides "logistical, operational and security" services to governmental and business enterprises, according to company literature. The firm announced in a December 2016 press release its intentions to, in the near future, "open forward operating bases" in both Yunnan and Xinjiang — a plan now confirmed by Global Times.

The Yunnan training facility is expected to open within the next several months, with the Xinjiang branch following suit in 2018. Frontier Services — incorporated in Bermuda and listed on the Hong Kong Stock Exchange — predominately operates in Africa but is expanding into China in hopes of exploiting the dearth of equivalent security companies operating on the Mainland. This move comes at a time when China is increasingly encouraging domestic enterprises to move into what are often referred to in Chinese media as "frontier markets".

Currently the chairman of FSG, Prince is perhaps better known as co-founder of United States-based private military outfit Blackwater. That firm rose to prominence during the US occupations of Afghanistan and Iraq and in 2006 signed contracts worth nearly US$600 million. During this period of spectacular growth, the company also developed a reputation for heavy-handed and ethically troublesome tactics.

However, in his conversation with Global Times, Prince was quick to distance his current firm from Blackwater — the latter of which was renamed and sold to a private investment group in 2011. "FSG employees do not carry guns and therefore do not provide any armed security services," he explained. That being said, few specifics have been released concerning what FSG will do, and with whom, once established in Yunnan. However, the 2016 FSG press release does supply some clues, reading in part that the firm will work to:

China's Belt and Road ambitions are vast, and have led to no small amount of tension with the Southeast Asian countries bordering Yunnan. Consequently, the decision by the province's Development and Reform Commission to cooperate with FSG may very well stem from recent violence against Chinese citizens and corporate interests in Vietnam, Laos and Myanmar.

Beware the wolf in sheep's clothing.

Terms of what they are planning to do would be nice, but in the meantime this does not sound good at all. Anybody who'd been associated with Blackwater...

Sounds like real business. Golden Triangle, of course theres a need for this service. Now they plan flourishing trade from India highway too. More realistic than some naive EU program, sending in millions so "poppy farmers can grow corn instead".

America is sending in Blackwater, for business, now thats something. Europe would be sending in feminists, rainbow movement and overall a bunch of freak non-gov organizations taking notes of some poppy farmer saying he would grow corn if he had money to buy the seeds.

Nothing has changed in hundreds of years - World's biggest drug dealers.

Who can forget the most important mottoes of the US govt - Deny Everything - Admit Nothing or I Don't Recall.

When I hear Blackwater I think of armed mercenaries - as Peter says, American - but not the sort who fought as the Flying Tigers. I hope we hear accurate reports as to what these guys/this guy is/are going to do here in this super-rapidly growing economy.

North Burma, 7 sisters India, to some extent Laos, all have quite severe conflict areas. Check Manipur news and see if its some area where to go for family holiday. Or how about Kachin state. A few months ago smoke was over Muse, thats opposite Ruili and Shan State, with areas even Burmese avoid. Chinese attacked in Laos. But still a lot of natural resources around, rubies, teak, minerals, jade and whatnot.

Maybe the company needs to have a briefing for Kunming laowai community at some bar so they are less suspicious. Buy a few beers and all is "cool".

A few years ago, someone told me that several thousand Chinese business men, on business trips, just disappear every year. I am sure that shipments of goods disappear at an even more alarming rate. I wonder how many truck drivers are hijacked heading south and west, once they leave China. Probably a very big business opportunity for a logistics security service provider, with experience of this kind of work; which FSG seems to have.

Yea, and it has a long history of Chinese (and goods) disappearing in these areas - and malaria is not only to blame. And long before Marco Polo. The first English official testing the route, Margaray was slain there too. Somewhere is still a memorial tablet around. Blackwater could make a fancy trailer with epic music, with history on the route - starting from Kublai Khans armys defeat, and then them coming in there "tattadaa!", in style of Hollywod, of course.

@ Peter: Note that there's no mention of these characters operating in India.

Article mentions "southwest corridors". And logistics are indeed opening to there. Its in relation to trade here in the context. Theres a huge area in Mandalay already as some kind of trade centre, for trade between Thailand, China and India. You find Indian businessmen in Mae Sot doing preparations. You see them in Ruili too. A bus started between Mandalay and Imphal last year. And so on. Theres plenty going on, but theres also plenty conflicts. If you are a businessman and want to bring something along road from Yunnan to India border, depending on the situation, you probably want to check about security logistics.

Anyway, I cant speak for this company, point was just that there are security issues in these areas. Its not like just buddhist monasteries and rice fields. And that trade to India is about to open too. First four messages were just about suspicion, so it needed some balance in comment section. But too much writing here now from my side, sorry about that.

Isn't he on record as saying killing random Iraqis didn't matter cuz they were from the 12th century? Somehow I doubt he thinks much of East Asian lives, either.

Probably he will make things worse. :-(

@ Kongming: You mean Prince? Where'd he say that?

Prince says that Blackwater involved 40,000 missions and only 200 involved his employees firing guns. From what I have heard it was a highly effective and capable company. A large part of the services provided was training. Prince is very wealthy guy who solves unusual problems.