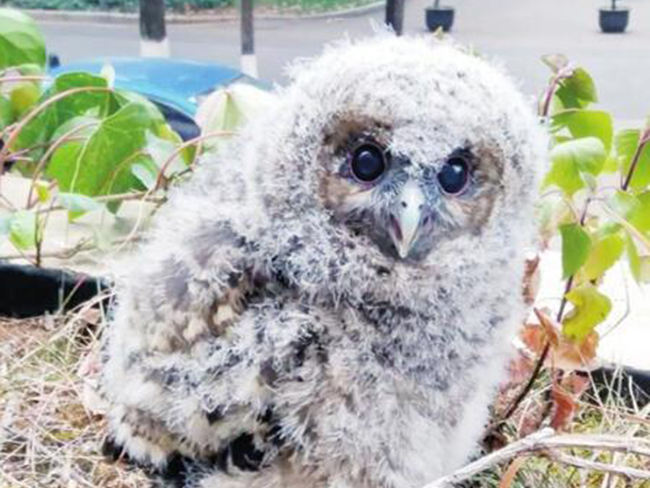 Sometimes between the endless stories of political corruption scandals and reports of the newest and greatest infrastructure projects, one needs a silly feel-good story. The editors at local paper Spring City Evening News certainly seems to think so, splashing a picture of a baby owl across their front page today. Website Yunnan Net did the same. We'll follow their lead and head into the weekend with visions of cute little owlets swirling in our heads.

Students at Yunnan University discovered a baby owl sitting in a grassy area of campus on the evening of March 1. Since then, a number of people have weighed in on what to do with the 15-centimeter tall bird. Some have suggested building it a new nest, others saying it should remain unmolested, while a third group contended the infant tawny owl — in Chinese called huilinxiao (灰林鸮) — should be sent to a wild animal shelter.

After a day of deliberations, campus police hoisted the bird to the roof of a three-story administrative building at the recommendation of Forestry Police personnel. It was hoped the animal's "parents would find it" and continue to provide it with food. The move was also undertaken because university groundskeepers estimate there are more than 20 feral cats living on campus.

Tawny owls are endemic to Yunnan and also maintain habitats in western Eurasia. They typically live in forests but have successfully migrated to urban areas in many places. The nocturnal birds of prey are extremely territorial, surviving mostly on a diet of rodents and small birds.

The owlet living on the Yunnan University grounds joins a long list of other wild animals popping now and then into the province's collective conscious. Less than a year ago, a troop of nine macaques became famous when they escaped from the Kunming Zoo and pillaged the downtown area for nearly two weeks. Before that, a solitary red panda gained social media fame and the name 'Prison Break' for his Kunming escapades.

Forestry Police have said they will take care of the baby owl if the parents fail to turn up. Authorities expect to wait for one more night and, if the mother and father fail to show, have plans to transfer the owl to an animal rescue shelter outside of the city.

It is a Himalayan Owl (the Chinese name is correct).

They all seem to turn up at Yunda. Probably hoping to improve their education and ultimately their prospects in the worlds fastest growing economy. ;-)

so what's happened since?

If it was picked up by bare hands, the human smell stuck on the animal would have prevented any "recovery" from the mother. Besides, how would a mother take back this baby to the original nest?? On her shoulder?! I am sure all these people teaming up to decide on this bird's fate must have had a look around the closest trees trying to spot a nest, but in general to me it sounds like nobody asked the local biology department for some advice !

aw, hope everything goes well for him.