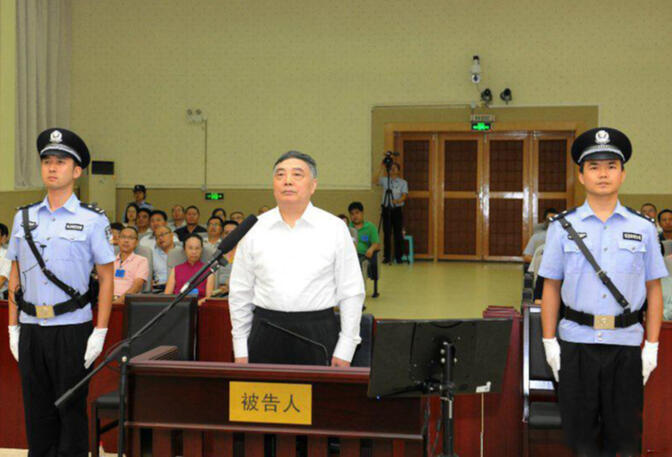 Once a rising star within the Communist Party hierarchy, Qiu He was sentenced to 14 years in prison this week for accepting millions in bribes. The verdict marks the official end of Qiu's once-promising political career. His meteoric rise while Kunming's Party secretary from 2007 to 2011 is now mirrored by an equally precipitous fall, ending unceremoniously this week in a Guizhou courtroom.

As has become normal over the past several years with almost all of Yunnan's highest ranking officials, Qiu faced charges of fraud, embezzlement and accepting bribes. Tried by the Guiyang Intermediate People's Court December 15, he confessed and then expressed regret for amassing an ill-begotten fortune of more than 24 million yuan (US$3.5 million) between 2008 and 2015.

For his crimes, Qiu received 14.5 years in prison, a much less severe punishment than some of his recently convicted government counterparts. The court explained the leniency of its ruling by citing the 59 year-old defendant's forthrightness and remorse, as well as the fact that investigators recovered much of the money and assets Qiu accumulated illegally.

Qiu took office as Kunming Party secretary in December 2007, following a stint as vice governor of wealthy Jiangsu province. Only months later, after taking the Spring City by storm, he was honored in Beijing as an 'outstanding contributor to China's reform' alongside a who's who of some of the country's most famous luminaries.

In his first two years as Kunming's most powerful bureaucrat, Qiu oversaw the installation of thousands of surveillance cameras citywide and approved the demolition of dozens of 'urban villages' (城中村) to make way for high-rise developments. He also supervised the building of the city's elevated Second Ring Road and the 'turtleback flyover' at Xiaoximen (小西门), had hundreds of thousands of trees planted as part of an 'urban greening' project, and sought to overhaul the city's educational system.

Qiu first made his mark by famously firing a civil servant for falling asleep during a meeting and published the names, office locations and personal phone numbers of nearly every municipal official in local newspapers. Many of these feats were lauded, while others have not stood the test of time.

Construction of the Second Ring Road helped to alleviate some traffic congestion at a time when Kunming experienced unprecedented growth in private care ownership. However, the streets connected to the Xiaoximen overpass remain a daily rush hour nightmare. Tens of thousands of non-native trees once planted at Qiu's orders died during a cold-snap in 2016. Conversely, in a success story, construction on Changshui International began during Qiu's tenure, and this year became China's fifth busiest airport.

None of this, however, may be remembered in the future, as Qiu becomes just the latest in an ever-growing rogue's gallery of disgraced and once top officials to have served in Yunnan's highest offices. Few details have emerged regarding his specific crimes. However, news reports insinuate it was construction ties to Jiangsu developers — who grew rich building apartment towers on land once occupied by Kunming's 'urban villages' — that led to Qiu's downfall.

Very sad to hear about Qiu He. Accomplished so much for this city during his short tenure.

When power is concentrated in the hands of a few, is it somehow surprising that many of the few become corrupt?

I thought power was in the hands of more than a billion people...at least that is what I have been lead to believe. The fact so 'important people' are getting indicted proves only one point...