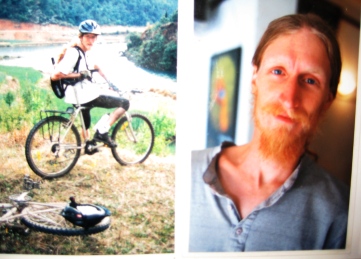 One month ago today, an accident on the Nanpanjiang River reminded Kunming residents - Chinese and foreign - of the fragility of life and the deep bonds that bind us all as friends, relatives and human beings.

On August 26, a seven-person rafting group set out on the Nanpanjiang split in a raft and kayak. The kayaker - one of the trip's organizers - capsized after entering a rough stretch of rapids, and the raft team entered the turbulent section of the river hoping to save him. The raft also overturned. In the end four rafters made it to shore and although everyone was wearing helmets and life vests, three people had perished: Michael Sutherland, his girlfriend Li Limei and the kayaker.

Mike Sutherland, 41, was one of five sons of a former mayor of the American city of Appleton, Wisconsin. In his own way, the friendly and upbeat longtime resident of Kunming was the unofficial mayor of the city's laowai community. His tall frame, long hair and goatee made him one of the most recognizable foreign residents of Kunming, which he first visited while biking across Asia in 1991.

Mike started his formal education at Westmont College in Santa Barbara, California. Eager to put himself in new learning environments, he enrolled in a semester at the Oregon Extension, an intensive program where a small community of students lived like hermits in log cabins while they read, discussed and analyzed classic texts from the humanities.

Mike also attended Semester at Sea, the floating university run by the University of Pittsburgh. Students circle the globe on the SS Universe, attending classes while at sea, and while in port (10 altogether) are free to explore. These experiences led him to Evergreen State College in Washington state, a school with a student-directed curriculum. When Mike graduated in 1989, his diploma listed his degree as 'Consciousness Studies'.

Soon thereafter Mike began his solo bike tour of Asia. Two years later he had pedaled some 60,000 kilometers through India, Pakistan, Nepal and China. He once quipped "home is where your toothbrush is", which reflected his adventurous life-philosophy. During his bike travels he fell in love with Yunnan province, especially its beauty and ethnic diversity. Setting up in Kunming provided him with an ideal base for exploring the province.

When Mike moved to Kunming in 1994 he was quickly given the nickname 'Bike Mike' in English to distinguish him from another Mike living in town who was working for Boeing and was known as 'Airplane Mike'. The nickname stuck and was even translated into Chinese, in which he was known as Lao Danche (老单车), or 'Old Bike'. 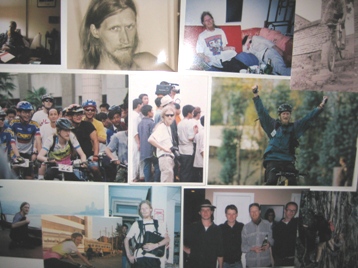 In addition to making countless friends during his time here Mike founded his company Peopleshemp, which sold a line of hemp clothing that he designed. The company's eco-friendly mission reflected Mike's love of nature and the outdoors - a love which defined his life right up to the end.

One of the key things that drew Mike to Yunnan and kept him in Kunming was the traditional hemp cultivation and hemp culture in rural areas of Yunnan, which he researched and worked with in developing his various hemp projects.

Shortly after Mike's passing, his brothers Abraham, Paul, Ben and Sam all came to Kunming to bring closure to his stay in Kunming. Chapter One held a memorial for Mike and Li Limei, who Mike had dated for the last few years, that brought together a large group of Chinese and foreigners, old Kunming hands and new arrivals to the city. The diversity of the group was a testament to Mike's open mind and desire to connect with people of different cultures, backgrounds and ways of thinking.

During the memorial, the Sutherland brothers and Mike's friends recounted their favorite Mike stories - the resulting laughter generally ending in small pregnant silences. It seemed like he was late for his own party.

Former Kunming resident David Abrahamson was a friend of Mike's who would meet regularly with Mike and other friends to play the board game Risk 2210.

"I have fond memories of Mike, me and any other folks we could find around hanging out, drinking beers, eating delivery pizza, and plotting world domination," Abrahamson said. "Afterwards we'd usually end up at Speakeasy or Camel, and Mike would often entertain me with one of his many adventures biking around Asia or traveling in Hawaii"

"Mike was always down for fun or adventure, always accepting of new people and always had a laid-back but energy-filled air about him," he said. "And he was always humble."

As reader Jess_KM said in this forum thread about Mike:

"Rest in peace Mike and Li Limei. Kunming won't be the same."

[Editor's Note: The GoKunming staff - most of whom knew Mike and Li Limei - extends its deepest condolences to the families of all three victims of last month's rafting accident.]

A fantastic gesture in honour of a truly great person.

He'll always be missed down here in 'banna too.

HI,
I went to grade school and H.S. with Mike.

He regularly kicked my ass at basketball when we where kids. I sucked! Mike was MUCH better than me. ha ha.

He was a great guy! I am extremely saddened to hear of Mike's passing, as it seems we would have had A LOT in common here in our later life.

He will be greatly missed. I feel I have missed an opprotunity to re-connect with a lost friend. Someday we will have a laugh together again, I am sure of it!

Mike was one of my first friends when I came to Kunming in 2004 to start my dissertation field work. He graciously accepted me into his circle of friends and I will miss his calm wisdom. Ride on, Mike!

I miss you mum and MIke, Now I start to practise songs you use to sing, I start to walking around the pizza shop you 2 like to had pizza b4...I miss you so so much...I can't believe you already left me +_+ and not come back forever

I just met Michael's brothers, Paul and Sam at the temporary store they have set up here in Santa Barbara, CA to sell the remaining inventory of thier late brother Michael's hemp clothing line. I didn't know Michael but his clothing line is fantastic and if his brother's are any indication of what kind of person he was, then he was a very good person indeed. If anyone reading this finds themselves near Southern California in November and December 2010 please come to Santa Barbara and visit Southerland Creations at 11 West Ortega St / +702.501.7941 and support their efforts to find good homes for their late brother's beautiful work. They are open everyday except Thanksgiving and Christmas from 10:00 AM to 10:00 PM through the month of December.

I met mike in hawaii 93-94 before he went to china.He was a good friend always uplifting despite any circumstances. I made a point to meet up every year he was here.to say the least i was deeply sad at his passing.
We attended the Taj mahal concert in pahoa. Great show. He still has a positive influence in my life today, forgive my not posting sooner. He will always be remembered as a go getter, positive will try,can do attitude,good friend,inspirational, humble and a lover of life and adventure.

He is missed greatly! I can imagine his hawaii stories. I could write pages of fun and good times with Micheal. On his way to china he met someone who was losing their farm for money reasons, He lent this guy $15,000 basically most of his travel money to help save the the farm! This guy paid him back, and the farm was saved ! i hooked up just about every year till his passing it was always something to look forward to. well its sunset in Kona and I am going on a bike ride with my oldest son for a swim and watch the sun set . Aloha Keith