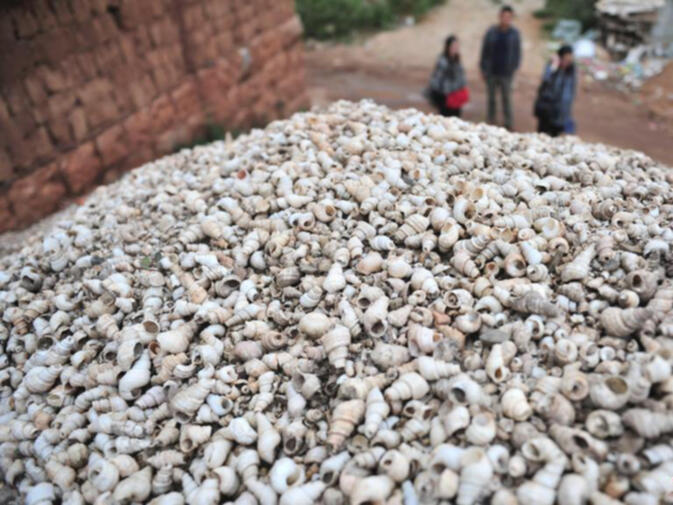 Only a few weeks after a fossil discovery in Yunnan further explained the evolution of prehistoric jaws, a much younger archaeological find is shedding light on how people in this corner of the world lived more than three millennia ago. A dig site in Yuxi Prefecture (玉溪市) has so far offered up pottery fragments, smelted copper pieces, burial sites and a massive collection of snail shells.

The discovery was initially made in June 2015 when construction workers began flattening a small hill in the village of Xingyi (兴义村). The local school — located about 70 kilometers south of Kunming — was in the process of building a new school cafeteria. Work was halted when excavating equipment first unearthed an ancient pot and then uncovered enormous quantities of shells. The school's president immediately informed the Yunnan Bureau of Cultural Relics of the find.

Scientists from the State Administration of Cultural Heritage and the Yunnan Archaeological Institute have now dug more than nine meters into the ground. Their discoveries are challenging them to rethink how ancient people once lived on the shores of Qilu Lake (杞麓湖). Carbon dating of burnt acorns found at the site show they and the other relics are at least 3,450 years old. Once the acorns were accurately dated, Zhu and his team placed particular importance on investigating the bronze pieces found in Xingyi.

These artifacts include the remnants of kettles and containers, indicating people in Yunnan were mining ore and smelting it much earlier than scientists previously thought. The people of the Dian Kingdom (滇国) and others have long been known from their bronze and iron artifacts. However, the discoveries at Xingyi push back the length of the Bronze Age in Yunnan several hundred years, according to Zhu Zhonghua (朱忠华), director of the Yunnan Institute of Archaeology.

The collection of shells found in Xingyi — thought to be the remnants of a giant food trash pit — has also revealed new insights into this mysterious culture. While sifting through thousands upon thousands of freshwater snail shells, archaeologists identified five larger specimens of an unknown tropical origin. Zhu believes the saltwater shells indicate the existence of trade networks stretching from Yunnan to either the Indian or Pacific oceans more than 3,000 years ago.

Bones taken from a dozen burial sites are currently undergoing DNA tests in an effort to identify who the ancient people of Qilu Lake were and whom they were related. Looking down into the excavation pit, Zhu recently told reports, "This is a history book, and each stratum is an individual page [...] The book spans thousands of years, and it is clear there are many mysteries waiting to be solved." 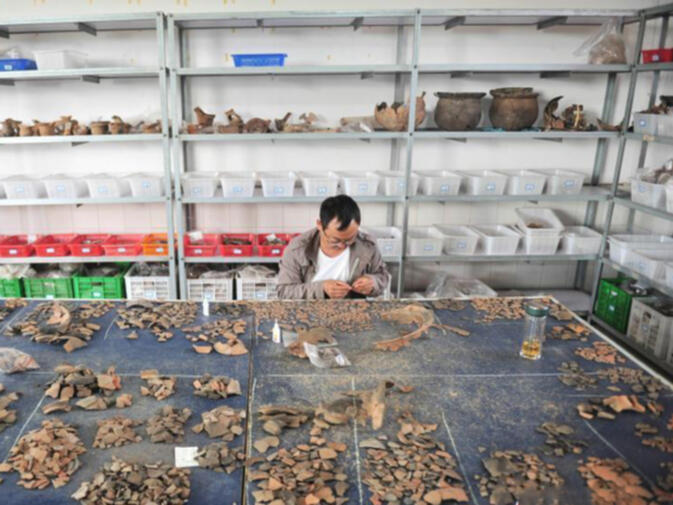 Such early bronze work - will be interesting to see whether it represents an independent discovery of bronze from the Shang in the north, or whether bronze culture spread from south to north in what today has become China, or vice versa, or what. At any rate it would seem to put the mytho-history of early 'Chin' into question.

Alien, the immediate north around this period was the Shu Kingdom of Sichuan.

The Shu were very talented bronzeworkers.

However, the site of the discovery is very close to Tonghai (通海), which although probably a far later toponym, literally means "connection to the oceans", and probably refers to the area's ancient role as a critical stop on trade routes connecting central Yunnan's lake-plateaux with what is now northern Vietnam via the Red River. In a sense, once you had arrived at Tonghai, you had arrived at the "oceans" (large lakes). Similarly, if you left Tonghai southward bound for the Red River, you were heading toward the ocean proper.

Note also that the Dongson bronze drum culture of northern Vietnam is very significant in the region. It spread its influence and artifacts to Yunnan as well as Burma, Cambodia, Thailand, Indonesia and the Philippines.

Therefore I would hazard a guess based purely upon geography and timing that the early evidence of bronzeworking discovered in Tonghai was likely due to technological and cultural influences from northern Vietnam rather than Sichuan's Shu Kingdom.

Actually the date (1400-1500BC) would mean it was earlier than the Dong Son culture proper, instead contemporary with its predecessor in the mid Vietnamese middle bronze age, the Đồng Đậu culture.

You may be right, Voltaire, but I think a case can also be made for independent origination of bronze work in the Yunnan-Viet Nam area ceterend in Yunnan and spreading south to Viet Nam, rather than the other way around - I'm not sure at the moment of the dates of

...dates of early bronze in Viet Nam, but note all the tin and zinc around Gejiu.

Yunnan is one of the few regions to have both tin and bronze in abundance. It's reasonable to suspect Yunnan supplied many neighboring regions with both.

Tin in particular is quite rare.