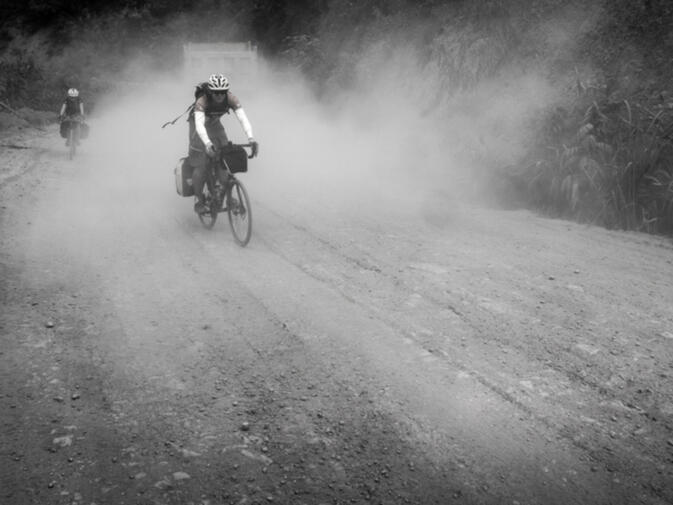 Kyle rides past clouds of dust kicked up by heavy trucks carrying rocks to the dam site of Nam Ou #6 (photo credit: Will Stauffer-Norris)

Running the length of remote northern Laos' Phongsali province, the Nam Ou River is one of the Mekong's largest tributaries. But the river that provides vital dietary protein and transport to people throughout this largely roadless watershed is about to be transformed. The Lao government has contracted a Chinese company to construct a cascade of seven hydropower dams that will slice this river into eighths — eroding not only the local livelihoods but the ecosystems upon which they rely.

We are covered in dust. Dropping off the top of a mountain, down a terrible corkscrewing dirt road, we see the sign, 'Nam Ou 6'. The dam is down there somewhere. Massive blue trucks tagged Sinohydro — China's state owned hydroelectric dam company — rumble by us, carrying tons of rock from a mountainside quarry to the river valley. Just upstream, Nam Ou 7 will create a reservoir backing up into the Phou Den Din National Protected Area.

Although building within a national protected area is purportedly against the environmental policy of Sinohydro, that doesn't seem to be stopping anyone around here. We bump down through a blizzard of dust, joints groaning, hands aching from clenching the brakes. Finally we reach the humid river town of Hatsa and a rare moment of relief. The rock-filled trucks go upstream toward the dam site and we head on downstream. 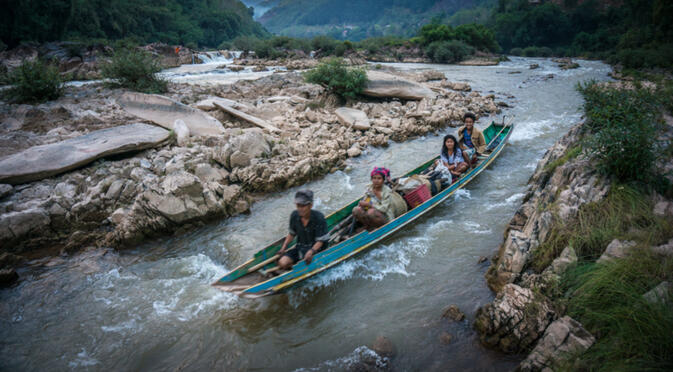 A boat speeds down a channel of the Nam Ou. This section of river will be inundated by the construction of one of many large dams on this river (photo credit: Will Stauffer Norris)

Nam Ou 5: Belly of the beast

After a bit of creative haggling over the proper fare for a bicycle, we buy tickets in Hatsa and stuff our valiant Trek cycles inside the narrow watercraft, lashed down by our tired multicolored bungee cords. After the last 20 kilometers of rugged jostling, we're suddenly zipping smoothly along through a gorgeous jungle canyon, river breeze drying the encrusted red sweat that covers us.

The captain skillfully pilots the slender, 40-foot longboat through impossibly narrow channels, barely missing every rock in the river. The occasional wave splashes over the sides, soaking the breastfeeding Lao mother and the other wary, homesick passengers seated in front of us who are returning to their villages, accessible only by boat. Here, the Nam Ou runs through the semi-wild, roadless heart of Phongsali province. Boat life is serene and we are in river-trip elation.

Three hours later, the scars of civilization reappear. Riverside deforestation precedes the concrete monolithic wall that looms in front of us — Nam Ou 5. Not quite finished, the river has been squeezed into a channelized tube and boat traffic is now prohibited. Ironically, dam workers on lunch break swim and seine for fish in a lovely tributary that will be under 200 feet of water in a year or two, thanks in part to their hard labor. We take a dip, retrieve our bikes off the boat, and start riding up a steep hill through the intense midday heat. Soon we come upon the raw bustling center of the construction zone, above the dam's solid concrete heart It is heartbreaking and fascinating and unbelievable. 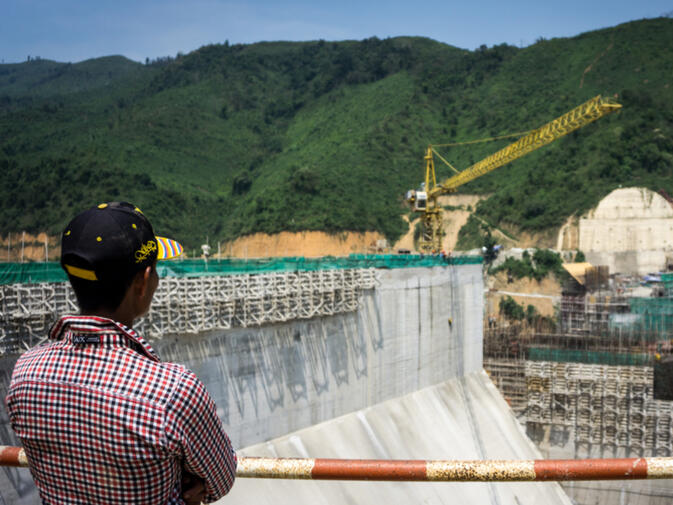 Our boat pilot takes in the new barrier to his traditional route shuttling villagers up this no longer wild river (photo credit: Kyle Seewald Hemes)

Humans, shrunk by the height of the wall, appear the size of mites. Workers suspended from scaffoldings stack rebar forms in preparation for cement. Backhoes, cranes and heavy machinery of all kinds squeak and trundle along, reconfiguring mined-out parts of the earth to build up the forbidding wall. We stop at one lookout point to take in the industrial boomtown. Our boat driver has made the solemn pilgrimage up the hill as well, silently taking in the new boundary of his route. His whole family makes the journey together on their long-tail passenger boat a few times a week, and he expressed uncertainty as to the sustainability of their livelihood now that this dam has truncated their route.

A truck full of waving helmeted workers passes us, followed by a pristine white pickup with tinted windows and Lao government plates. We ride a few yards further and look out at the downstream side of the dam. Far below, at river level, two open concrete tunnels still allow the river to slither through. We can only wish upon the waters our condolences in the final vestiges of free flowing bliss. As we continue to take in the overwhelming scale of the project, the same Lao government pickup truck drives past for a second time. Our status as camera-wielding foreigners in a location not wholly approved by the communist regime for tourism convinces us that it is time to ride on. 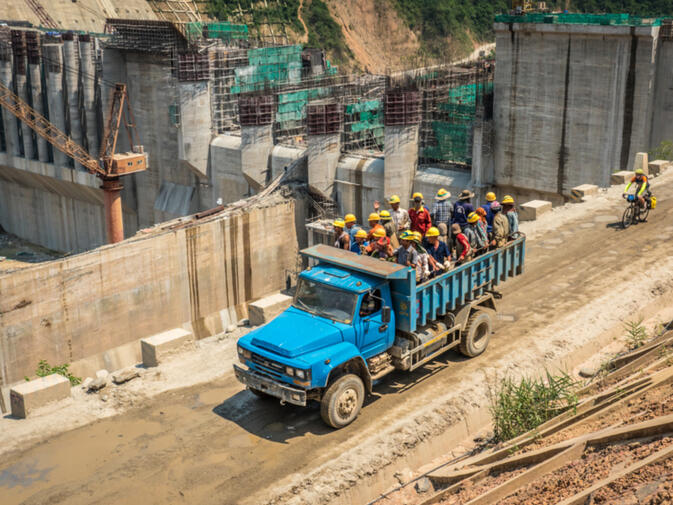 Kyle rides past the site of Nam Ou #5, a major hydropower project on the currently free-flowing Nam Ou River (photo credit: Will Stauffer-Norris)

While dipping our sticky rice into some spicy paste at a local restaurant, we spot a falang — or foreigner — a few tables over. He's an independent American consultant for several NGOs and has lived in Laos for years. He prefers to remain anonymous, but gave us the lowdown on the dam situation: Laos borrows money from Chinese banks to build seven large dams. Laos contracts with Sinohydro, a Chinese company, to construct the dams. Sinohydro then hires Chinese and Vietnamese workers at the dam site. The best jobs Lao people can hope for is clearing brush.

Sinohydro, he says, owns the dams for a period of 30-40 years, during which time they split the profits from electricity sales with the Lao government. The power generated then gets divided in its distribution between domestic and international consumption. To us, recently arrived from the gauntlet of dams and deforestation that was once a functioning river, the benefit for the majority of Lao people does not seem to add up. 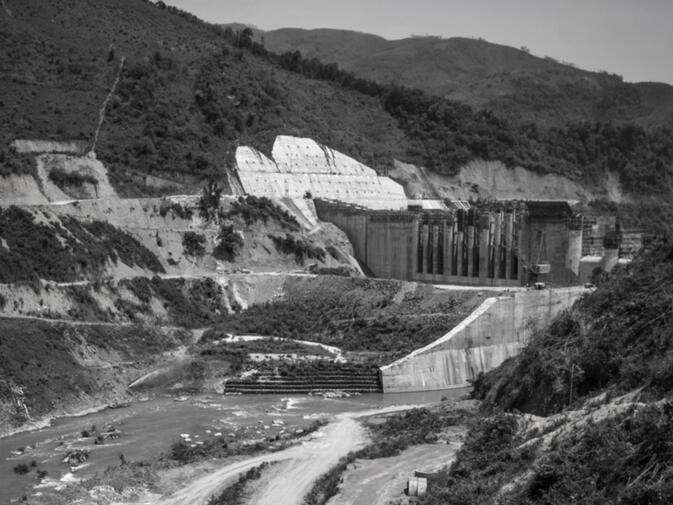 A monolith of a dam wall rises. It is one of seven Chinese-constructed dams along this important Mekong tributary, the Nam Ou (photo credit: Kyle Seewald Hemes)

Another boat ride, another set of friendly negotiations. Our Lao-language bartering gets some laughs and soon we are on board, zooming through a long roadless stretch of magnificent limestone Karst structures protruding from the forested canopy. This time the boat is packed full, mostly with an impressively diverse crowd of other falang heading to the backpacker paradise of Muang Ngoi. 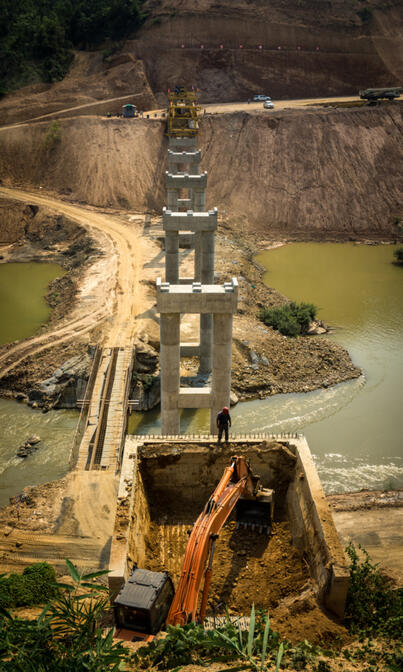 There are two Frenchmen, a Brazilian woman, a Peruvian with a motorbike, a couple of Israelis, and three teenage Lao monks within arms reach. We've intersected with the so-called 'Banana Pancake Trail', a loosely defined series of routes criss-crossing Southeast Asia, frequented by international backpackers whose tourist dollars sprout restaurants, guesthouses and trekking guides in their wake.

After weeks of riding through rural Yunnan and Laos, in places mostly devoid of foreigners, it feels odd to be part of the crowd again. Muang Ngoi is not the 'real' Laos, we sneer, self-righteously. But damn is the food a lot better. A hedonistic afternoon of fruit shakes, hammock reading, and eating ensues. The chef of a local restaurant we patronize is from the northern capital of Luang Prabang, our final destination, and has since opened a classy restaurant in this relaxed riverside village. We order river weed, a crunchy fried flake that's harvested from the banks of the Nam Ou. Our dinner is mok ba, a steamed river fish wrapped delicately in a banana leaf. This river, on the verge of being dissected by Chinese dams, is still providing, as it has done for so many inhabitants inhabiting its watershed.

The feeling of unease sticks with us, as we leave town heading downstream. When the dams are constructed, we will require scuba gear to witness the remains of these hillside villages that climb from the banks of the river. Naked children splash in the eddies, between long wooden boats, likely oblivious to the fact that their entire river will become a series of flat, sediment-hoarding lakes lapping at denuded hillsides. The river's voice, that vernacular of hydromorphology, will soon be drowned out by the distant drone of exported electricity.

This article is the fourth in a five-part series about cycling from Kunming to Luang Prabang by Kyle Seewald Hemes and Will Stauffer Norris. The series was originally published on National Geographic Adventure Blog shortly after the authors cycled along or near the route of the proposed Kunming-Singapore Railway. Parts one, two and three can be found here.

Interesting to see some on the ground shots of construction. A map wouldn't go astray.

I think the wicked Norwegians build more dams in Laos than China.

You know what I always say? Norway dot no.

After a visit to Phonsavan area of Laos, thats around "Plain of Jars" there, seeing all the UXO going on - and whats been going on - you pretty much end up with the conclusion Western nations have nothing to moralize about when it comes to Laos. Or China, Vietnam, Thailand, in Laos. You got sattelites and ipads and whatnot and here we have a country bombed to oblivion some 40 years ago, and still having problems with this UXO. One main reason for the poverty. I used to think Western nations should demand more of Laos until realizing theres no moral ground at all. After a visit to Phonsavan.

@ Peter: US ordinance lying around in Southeast Asia - reminds me of an old Tom Lehrer song from around 1962:

'"Ven za rockets go up who cares where they come down,
That's not my department,"' says Wernher Von Braun.

Looking forward to the finale of this thrilling series. Will there be a season two?