Wandering through the Ruili countryside

By Eduardo Jaramillo in Travel on August 5, 2016 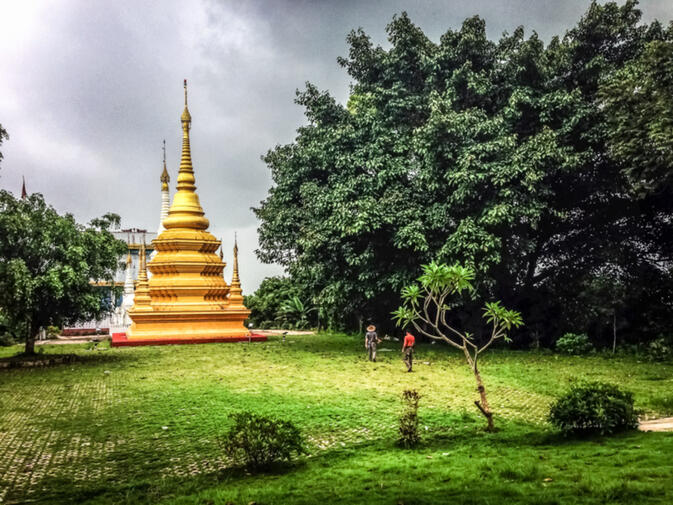 Part of my schedule for visiting the China-Myanmar border town of Ruili was to explore the outskirts of the city. The plan was to leave the city and visit nearby Dai minority towns by bike, but I ended up having to take a taxi, as there were no bike rentals to be found. I had heard these villages were more authentic and less crowded than the some of the more famous Dai communities of Xishuangbanna, but when I told my driver I wanted to visit the nearby village of Hansha (喊撒), his expression worried me. As he started driving he told me that this village wasn't really worth a visit, and that I should check out a nearby waterfall instead. His concern for my experience seemed genuine, but I told him I was determined to see some Dai culture before I left the area.

Once we arrived, I saw the village was not quite what my guidebook had prepared me for, and that there was a 30 yuan entry fee. After paying for a ticket, I entered to find a couple of shops on my left selling some Dai merchandise. A winding street led to the center of town, lined with signs explaining Dai culture. At the end of the street were statues of two Dai women standing together. I stood staring at the Dai temple in the center of town while a group of Chinese vacationers on a group tour entered the square. The town felt utterly deserted aside from us tourists. As a few of the men in the tour group began to chat loudly, I walked quickly down another street. 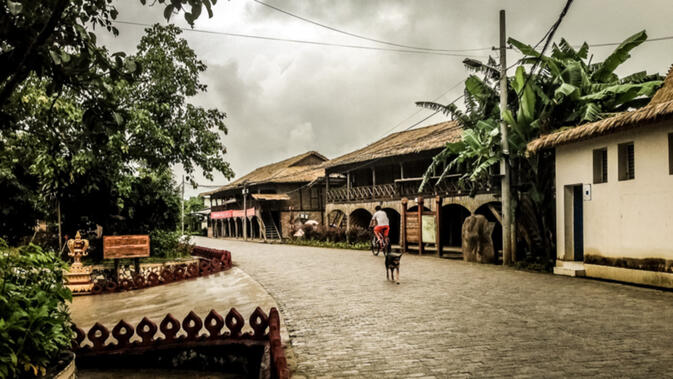 After walking through more streets lined with empty-looking bamboo houses, I decided to leave the village and head to my next stop, a site called 'One Village Two Countries' located along the same highway as Hansha. Here visitors could stand on the China-Myanmar border and experience some Burmese culture. The site is billed as one of the more famous tourist destinations in the area and there were many more people visiting, but I got the same jaded impression Hansha had given me. Burmese people manned the shops and open-air restaurants with dispassion. Even the tourists who had paid to get in didn't quite seem to know why they were there. Wandering paths were lined with shops, each selling more or less the same things.

Feeling somewhat disillusioned with the outskirts of Ruili, I left after a short time and continued walking down the road towards a temple called Leizangxiang (雷奘相寺), located a few kilometers down the highway. I turned off onto a narrower road with a sign looking for a village, but there was no semblance of one in sight, instead finding mostly just fields of crops. I asked a couple working together in a vegetable patch if they knew the way to the village. After a few repetitions, the woman gestured toward a distant settlement at the foot of a hill, and then towards two stupas partially eclipsed by a cluster of trees further up the hillside. 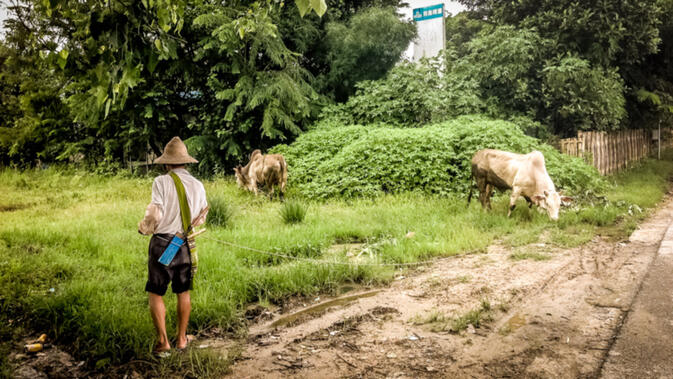 Although I realized I had quite a bit more walking to do, I was re-energized by the fact that so few cars were on this road, and none of the diabolical signs of commercial tourism were present. The noise of the highway receding behind me, I was now walking into a sea of brilliant green rice paddies. A few temples and clusters of houses dotted the landscape, and forested hills served as a backdrop for the scene. The rice fields gradually gave way to houses, some made of bamboo, others like the more typical modern houses of Chinese villages.

The town was quiet, but a few people lounged outside their houses, and a few small children played in the street. Asking directions was difficult as many people didn't speak Mandarin, and some form of sign language was required to make sure I was still on the right track to the temple. As the hill I was climbing grew a bit steeper, the tops of the two stupas poked their heads above a line of trees, and the houses became sparser again. I rounded the last corner as the path plateaued, and the main temple itself came into view. 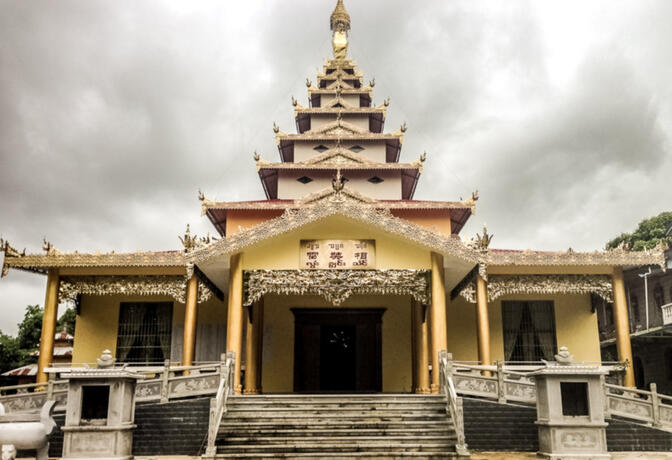 A few people lounged around the area, enjoying the afternoon silence above the small village and far from the busy highway where I had begun my walk. They didn't appear eager to speak with me, or even interested in my presence. The humid air was heavy around the temple, hanging over everything like a blanket, and no one seemed in the mood to be particularly active.

I caught sight of a couple of peacocks sauntering around, unconstrained, as I walked away from the main temple toward the stupas, 100 meters away. One was gold while the other was white. While the Stupas and temple are relatively new, this location has reportedly been home to a Theravada Buddhist site, in some form or another, since the thirteenth century. 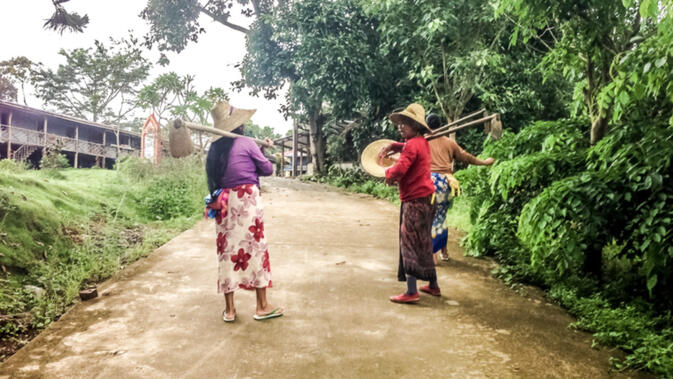 After taking in the scene for a while longer I began walking down the same way I had come, beginning the long trek back. This was when I saw the most residents of the village. I passed many men and women carrying farming tools, but it was difficult for me to tell if they were coming back from working in the fields, or going to some other group of fields to begin their labor.

My time in the outskirts of Ruili offered a poignant contrast between two types of experience. I had first been to the tourist traps of Hansha and One Village, Two Countries, and then ascended, literally and figuratively, up to the village of Mangyao and Leizangxiang Temple. There wasn't anything to do or buy at the temple, but thanks to the relaxed and natural atmosphere it was easily the highlight of my time in the countryside surrounding Ruili. It's difficult to know if Mangyao will go the same direction as Hansha. At the moment, tourists don't seem to go out of their way to visit the somewhat isolated town and it's beautiful temple. But if Chinese tourists tire of the canned nature of mainstream stops, a ticket booth may be arriving soon in Mangyao. 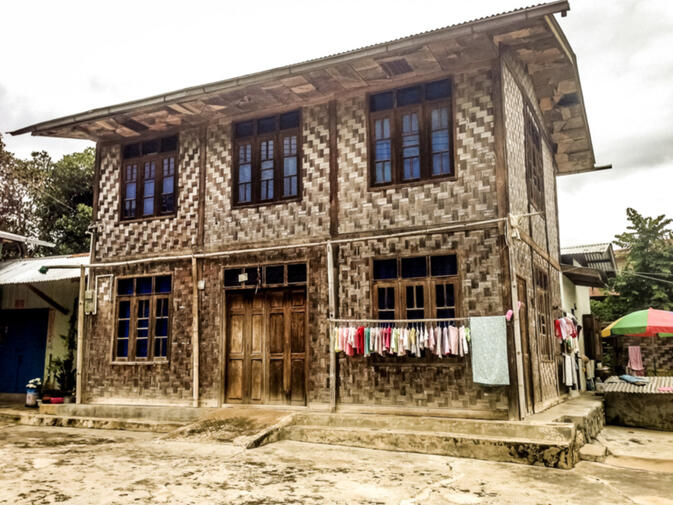 It would have been interesting to get a closer look at some of the older, local Dai writing if any is still available to view as the script used in this region is historically significantly distinct from that used further east in Yunnan, for example in Xishuangbanna Prefecture, which adjoins the Shan States of Burma.

Those interested can see my summary of a book on this subject, Sai Kham Mong's 'The Shan Script' at pratyeka.org/scripts.png

I also have a collection of Dai Theravada images from 10 years ago shot primarily in Jinggu region of Simao (now Pu'er) Prefecture at picasaweb.google.com/106883718971909092529/DaiTheravada (VPN required)

Just uploaded that image to Wikipedia Commons, now visible at en.wikipedia.org/wiki/Tai_languages#Writing_systems as at this rate I may die before I ever get around to publishing the ancient history of Yunnan book I made the summary for!

Those non commercialized temples out nowhere and just used by locals are always a pleasant find.