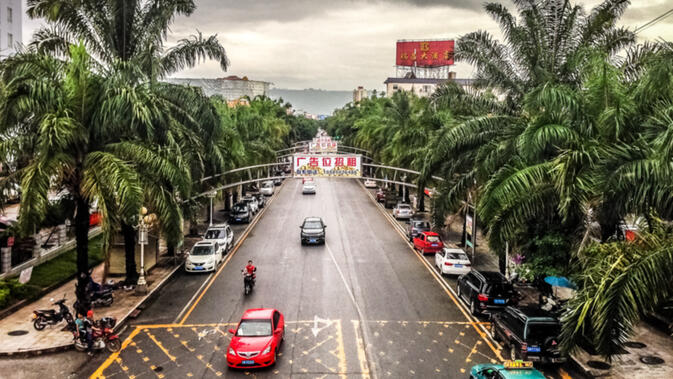 Having visited many of Yunnan's more famous sites, I challenged myself this past weekend to see a slightly less popular area of the province. Ruili (瑞丽) is a city in Dehong Dai and Jingpo Autonomous Prefecture, which juts out into China's neighbor Myanmar. Ruili is the official site of contact between the two countries along this portion of the border, with the Burmese city of Muse just next door. Historically, Ruili has played the role of Yunnan's 'Wild West', somewhat infamous along the backpacker trail since the 1980s in large part for drug and prostitution problems and a generally raucous atmosphere.

However, a government-organized clean-up campaign over the past decade or so has pushed much of the illegal activity under the surface, with the jade and timber trade now overshadowing the town's more lascivious past. Climbing out of the bus into a light warm rain in downtown Ruili, I felt I could easily be in any typical town in Yunnan. Humidity and abundant palm trees did immediately give it a distinct feeling from Kunming, but otherwise it felt like most other small Chinese cities I've visited.

But as soon as I began walking towards my hotel, details became apparent that indicated this was not like most other towns. Burmese, Dai, and Jingpo script accompanied the Chinese characters on signs. I passed a group of Burmese men dressed in the distinctly not-Chinese longyi — a garment similar to a sarong — and Ruili quickly began to feel like a border town.

After checking into the hotel, I decided to explore the area, eventually stumbling on the Ruili Jade Market. It was marked by a large gate emblazoned with the words 'Traveller Street', a somewhat forced attempt to make the site seem a bit more tourist-oriented. The market is made up of two streets full of small shops selling jade imported from Myanmar, which remains the world's major source of the precious stone for which China's rising middle class has developed quite an appetite.

China has seen some incredible price increases for jade in just the last decade or so. However, the market was relatively empty for a Friday summer evening. Curious, I spoke with one of the dozens of vendors, who seemed unworried about the lack of customers, chalking it up to the dipping economy. He did seem slightly disturbed by two older Burmese men chatting near us. Furrowing his brow, he told them to get lost. 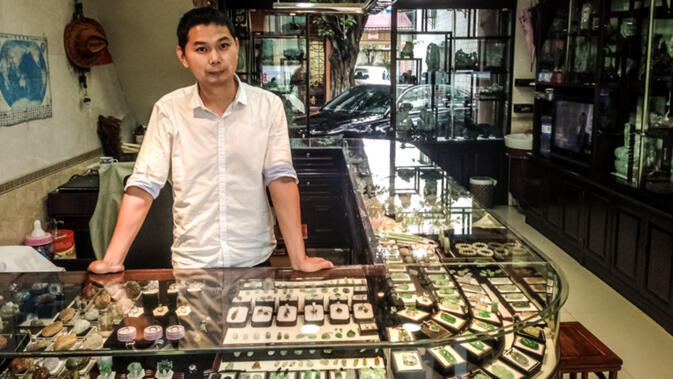 After walking around some more and taking in more of the city, I made my last stop for the evening at Huafeng Market, Ruili's most popular night bazaar. Here I realized that jade shops are in fact everywhere in Ruili. People would set up mats on the sidewalk and sell mass-produced jade pieces — or at least pieces of something resembling jade. Shops like the one I had visited in the jade market were present on many of the city's streets, and high-end chain stores that I recognized from Kunming were present as well, trying to cash in on jade culture.

Huafeng Market had all of the bustle that the jade market was lacking. I took most of these nighttime socializers to be locals, prepared for — or seemingly unconscious of — the on-and-off rain that plagued Ruili most of the time I was there. Young Burmese guys with tough expressions wore the skirt-like longyi confidently along with the rest of their fashionable Western-style clothes, an almost comical sight to unaccustomed eyes. Some Burmese men and women also wore a traditional white make-up on their cheeks, another tradition common in Myanmar. It was more difficult for me to distinguish members of the Chinese ethnic minorities that live in the area, but it was obvious that Han Chinese still make up only a small proportion of Ruili's total population.

The other major stop in Ruili that I visited is the famous border checkpoint of Jiegao. Technically a separate entity from Ruili, Jiegao is busy with both tourists and locals, and the percentage of Burmese people you see goes up quite a bit, probably because many come over simply to take advantage of wealthy tourists. Foreigners are still unable to pass through the checkpoint if they don't have a good reason, but the site is still worth a visit. The Chinese side is quite built up with hotels, jade markets and luxury duty free stores greeting fresh faces from the Burmese side. An impressive Chinese government building marks the actual checkpoint. 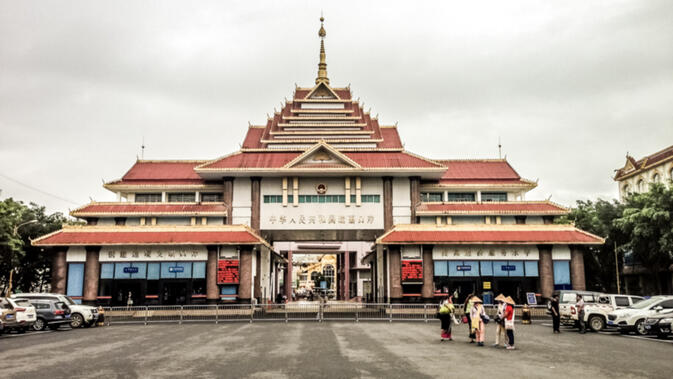 Peering over to the opposite side, one gets a very different picture. The only structures readily in sight are the similar Burmese government building for controlling movement across the border, flanked by run-down apartments on either side. The town of Muse was built with an economic boom in mind, but time has not been kind to it. While both the Chinese and Burmese checkpoint buildings are impressive in both size and design, the border fence that branches out on either side of them offers a glaring contrast. 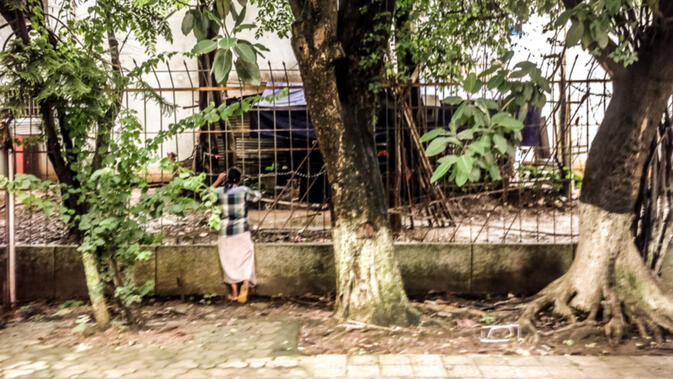 It isn't particularly high, and looks quite climbable. People on one side of the border spoke through the fence to acquaintances on the other. I saw children small enough slipping through the bars of the fence along parts that saw less traffic. It was pretty clear that quite a lot of unofficial coming and going occurs in the area. Seeing how little surveillance there was so near the official checkpoint, it suddenly seemed natural that the illegal dealings which have made Ruili famous should occur. 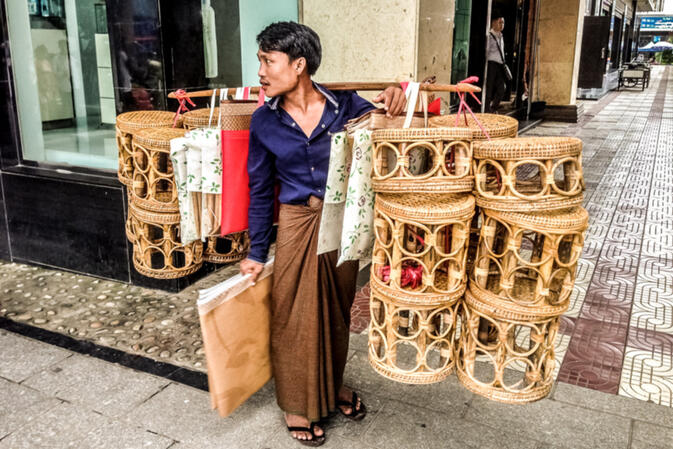 That night I headed for Nongmo Lake, an area that I had heard was known for its popular late night bars and live music. It was Saturday, and I expected to be greeted by an unruly scene of inebriated ne'er-do-wells spilling out of shifty establishments to snack on barbecue. Instead, I came across a row of roomy, nearly empty bars, with music blaring out of speakers. I made my way into one of them, sat at the bar, and began talking to the bartenders, interrupting them from their cellphones.

When I asked where all the people were, they shrugged. They reasoned that it was probably simply that there were too many bars in Ruili, and not enough customers to fill them all, and it wasn't peak tourist season anyway. I had managed to avoid nearly all forms of the city's reputed rowdiness.

Ruili's high degree of diversity definitely sets it apart from many other Chinese cities, and even gives it a socially fractured feeling at times. But if you go hoping to find the boisterous, shady sides of town — the gambling, obvious drug trade and infamous 'hair salons' of yesteryear — you might have to put in more effort than in the past. Similar to many other places in Yunnan, tourism, development and perhaps a more watchful eye, have changed the local landscape. They have certainly served to moderate the fabled extremes of Yunnan's one-time wild west.

Buses leave daily from Kunming's West Bus Station for Ruili. A ticket for the ten-hour bus ride ranges from 294 and 310 yuan. Also, there are multiple direct flights every day from Kunming to Mangshi, which is a two-hour drive from Ruili. Passengers on Ruili Airlines will be provided a free bus ride to the border town.

If you are interested in visiting Ruili, or anywhere in Yunnan, Kunming-based tour operator Wonders Of Yunnan Travel provides rental cars with drivers, hotel bookings, all sorts of travel related services and other valuable tourism information. Please get in touch directly for further details.

Thanks for the update on Ruili.

Had a chance to see Ruili in 2000 and it was probably as close as "zomia" as any place could get. Jiegao was some kind of anarchy enclave, you had a trail if heroin addicts walking through a hole in the burmese border fence, to the jiegao park, shooting heroin. There was no law so this was convenient place for this. Abundant of child prostitutes, some of those kids cant have been more than 12, as an estimation. Around 2003 a massive clean up took place, organized all the way from Beijing. Some american researchers could say the plaincloth police were interviewing prostitutes there at the moment, to get a grip of what was going on. Two years later a change was evident. A few years later you couldnt recognize Jiegao anymore, there were no addicts there, the border was nice and controlled and the prostitution was somewhere else. If anyone wants to see this Wild West now, its all in the past. And some under surface.

Thanks for the report.

I visited Ruili during my very first trip to China in 2006. I didn't speak any Chinese at the time, and Ruili was the first place on my itinerary where no English was spoke. Even then, the "this place used to be scandalous, not so much anymore" narrative was already in place.

I personally find nearby Mangshi and Yingjiang to both be more pleasant cities, but the Burmese presence is definitely greater in Ruili.

Any word on when that border crossing will be opened up to foreigners (without expensive prepaid tours)?

High speed rail from Dali to Ruili is in operation. A two-hour journey.

@Peter is right. Cross-border illicit drug smuggling by Chinese-speaking Burmese ladies from Myanmar may still needs to be addressed w/ more accountability by local border patrols on both sides. It's Yunnan's wild west.