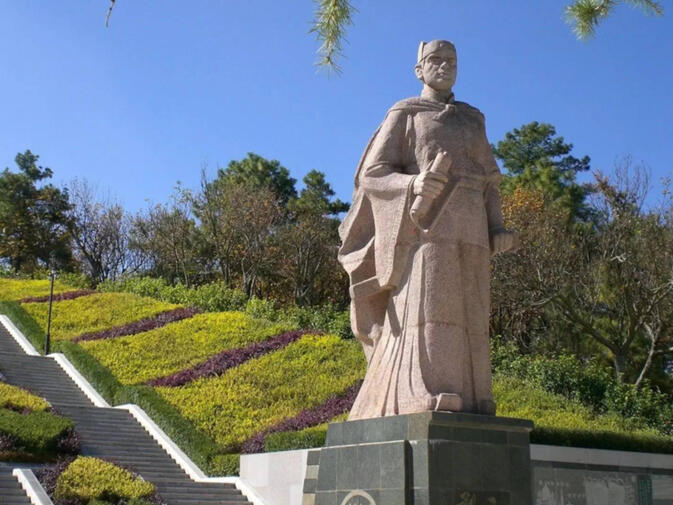 People often forget about sleepy Jinning (晋宁), a small town at the southern end of Dianchi Lake less than an hour's drive from Kunming. The city government, with the backing of an enormous new theme park, is looking to change that, hosting a festival centering on the city's most famous native son, the fifteenth century maritime explorer, Zheng He (郑和).

On July 11, Jinning inaugurated the first ever Zheng He International Culture and Tourism Festival (郑和国际文化旅游节). The multi-week extravaganza features poetry and art exhibitions, performances and gallery openings across the city celebrating Zheng He's life and accomplishments as arguably China's greatest ever diplomat.

Eighty-seven years before Columbus sailed the Atlantic, the towering admiral set out on a mission to introduce China to the world. He commanded six of his fleet's seven voyages, venturing as far west as modern day Tanzania. At the height of his power, Zheng sailed with 317 ships and commanded nearly 28,000 men. His expeditionary voyages from 1405 to 1433 took him to Southeast and South Asia, the Middle East and East Africa.

Zheng rose to the post of admiral from extremely modest and unlikely beginnings. Born in Jinning in 1371, he was raised on the shores of Dianchi by his Hui parents until being kidnapped, castrated, and brought to Nanjing to serve as an imperial eunuch at the Ming dynasty court. Following two decades of loyal service, prince Zhi Di rewarded Zheng with the command of the emperor's planned treasure fleet. Over the course of his voyages, Zheng developed a reputation as a skilled diplomat tolerant of the cultural and religious differences he encountered. Today, outside of China, he is still venerated as a patron saint for founding dozens of temples scattered across Southeast Asia.

The current festival in Jinning looks to capitalize on this outsized historical reputation, enlisting the help of a equally gargantuan marketing machine. Of the eight major exhibitions and myriad performances making up the Zheng He International Culture and Tourism Festival, the majority will be held at the Ancient Dian Kingdom Culture and Tourism Town (七彩云南古滇名城).

The sprawling theme park cost seven billion yuan (US$1.05 billion) to complete, and is located 30 kilometers northeast of Jinning. Dignitaries from Bangladesh, Cambodia and Myanmar are expected to attend the festival, which somewhat oddly does not have an end date.

In addition to daily performances, the event will feature models of Zheng's treasure ship fleet, an exhibition focusing on the admiral's house and upbringing, a display of voyage relics and the unveiling of a collection highlighting stamps from around the world containing Zheng's image. In addition, the festival will witness the publishing of a new modern Chinese language version of The Biography of Zheng He, which was originally written in classical Chinese more than 400 years ago.

This is a Historical and Cultural site of Kunming and it is located inside Zheng He Park.

This is another historical site located not from from the park in Jinning.

I believe Kunyang has a memorial sports stadium, with map of Zheng He's voyages on a large bronze plaque.

Important man, important history, reduced to a theme park. Zheng He might as well have been Donald Duck.

Well he wasn't reduced to Donald Duck till you made the comparison, thanks.

All this history and you cant sail on any of the lakes in yunnan.

I, an American, was recognized as one of the Zheng He ambassadors. It will be on YNTV tonight 7-17 and tomorrow. Zheng He should be a role model or inspiration for Chinese youth to become the next expolrers of outer space and exploration of the planets.