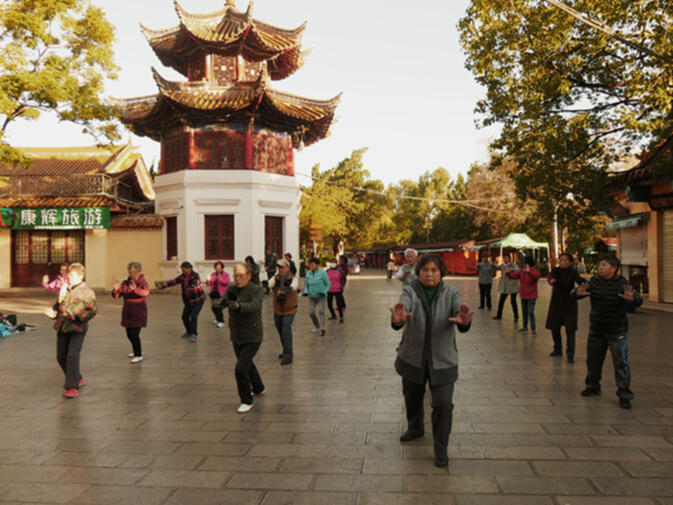 While the sun rises at about a quarter to eight on a winter morning, the old ladies who live nearby gather and are ready to start their day by dancing and practicing taichi at Green Lake Park (翠湖公园) in the center of Kunming. Many youngsters nowadays may not understand the obsession these ladies have for dancing in public areas, but the tradition is decades old.

Back in the 1960s, ballroom dancing was considered a 'corrupted capitalistic lifestyle' and against the ideology of class struggle. When universities held dance events, some conservative teachers would tell the students not to join or watch. Xu Lin — who was a 16 year-old student in 1961 and is now an editor at People's Daily — recently blogged on Sina of her memories:

I remember their words. I never went to see such public dancing events, and neither did any of my classmates. That's why people who grew up in the age of class struggle were said to be 'blind to dancing'.

Over the following decades, ballroom dancing — seen as a symbol of Western culture — gradually vanished from China. However, in the 1980s, as the Great Proletarian Cultural Revolution subsided, and the reform and opening period began to unfold, people started to seek out entertainment activities to reconnect themselves with society. In such a comparatively loose cultural and political environment, there was a trend of people starting to dance again. 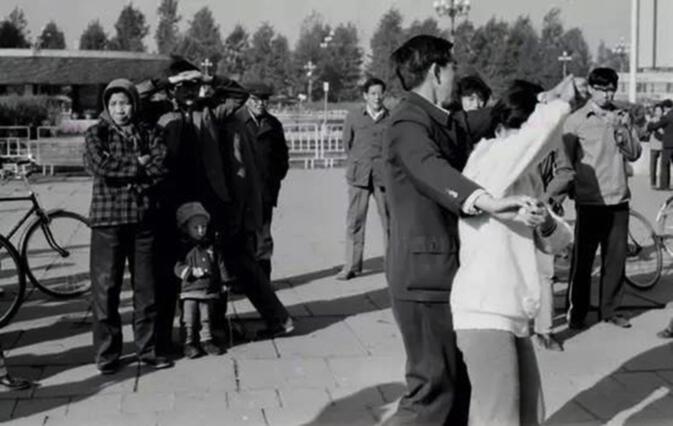 This took place all over China, not only in ballrooms, but also in public areas such as parks and squares. While some retired people actively learned from the younger generation who voluntarily came to learn and sometimes teach, others were too shy to take part, and instead just watched. Now, retired people in Kunming gather everyday at Green Lake Park for recreation, health and community.

A woman surnamed Lin, 66, leads around 20 people through taichi and sword routines in Green Lake Park, and says she started to do these exercises in 1990. It started once when she fell ill while in her forties, and subsequently realized the importance of exercising. "It's good for some chronic diseases like hypertension and diabetes," says Lin. "It helped with my health." She wasn't very professional at the very beginning, she admits, but took some classes elsewhere and came back to Green Lake to teach others.

Lin says doesn't know the names of all of her 'students', who hail from a variety of backgrounds. But a woman surnamed Zhang, a lady in her seventies, knows everyone in her ballroom dancing group, which consists of six women and one man. "We didn't know each other at first," says Zhang, "But now we've become brothers and sisters caring for one another."

When asked how they first started, Zhang explained that a retired government official became very depressed when his wife passed away. Friends invited him to dance, which finally got him out of his low mood. He felt so relieved after he learned how to dance that he invited other friends to join too. Even though he is no longer with the group, the other friends still dance together everyday. They also hang out every week or two to hike in the mountains around Kunming. 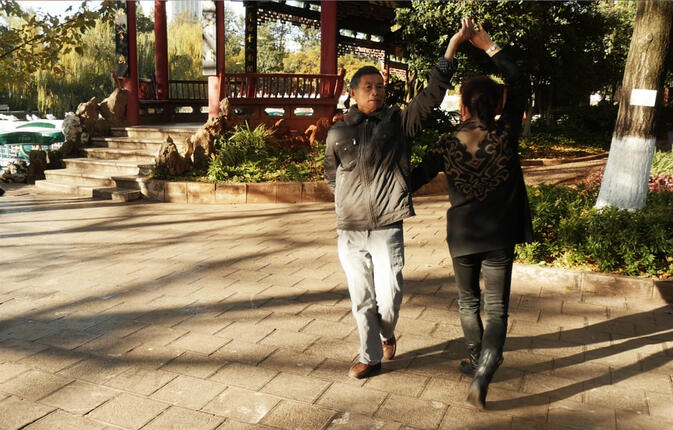 Somehow dancing has this magical curative power. When people get older, their friends and workmates gradually fade away. But they still have the need to talk with others, share their stories and have fun. Thus, they come to the park even when it rains. "Green Lake Park is just like the backyard of my house," says Zhang.

For her, daily life is generally based around Green Lake. She and her friends usually dance for the length of ten songs, from 8:30 to 11:00 each morning. At 10:30am, Zhang makes a phone call to her husband and then walks around the park with him. Then they go to the market to buy some things to cook for lunch. In the afternoon, she takes a nap and then does some housework. After having supper and watching the news on television, they both come back to Green Lake for another evening walk.

"People may find it scary walking alone in other parks at night," says Zhang, "But that never happens in Green Lake." Even when it gets dark, crowds of people still sit around watching performers singing traditional Dian Opera. They typically applaud and cheer after every song.

Zhang Xinfa, 66, may seem unique in this dancing group since he is the only man. He is probably the best dancer I have ever met in the park. He is a retired member of an army art troupe called Qun Yuan (群苑), which used to travel around the country giving performances. In his hands he holds a small furled umbrella as a substitute for the musical instrument the pipa (琵琶). He leads the women — who range in age from 40 to 70 — in dancing gracefully and slowly to traditional pipa music. "On one hand, this is for exercise," says Zhang, "On the other, I want to drive them with my passion. Old people should have young minds." 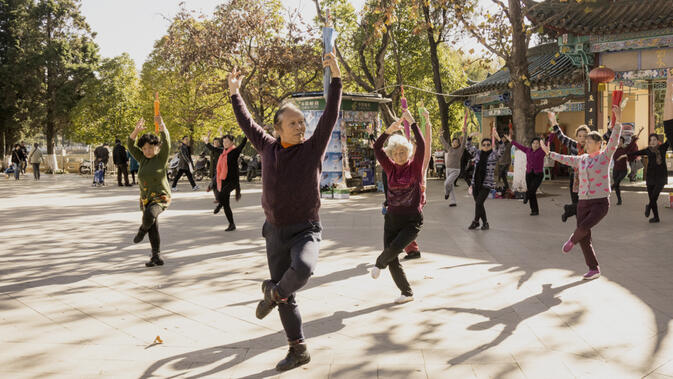 As their singing reverberates in the air for the whole day, these elderly people living in Kunming have developed profound ties with venerable Green Lake Park.

It's one of the things that makes China special, in m opinion.

Gamora: I'm a warrior, an assassin. I don't dance.

Star-Lord: Really? Well, on my planet, we have a legend about people like you. It's called Footloose. And in it, a great hero, named Kevin Bacon, teaches an entire city full of people with sticks up their butts that, dancing, well, is the greatest thing there is.

On balance it's a good thing: public space for the public.