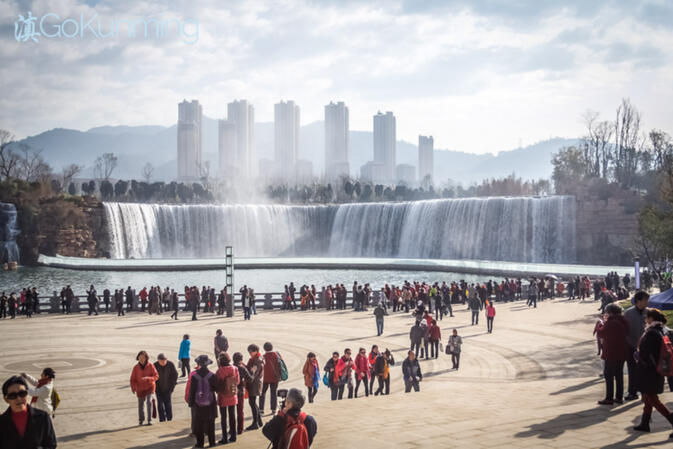 Seemingly lost amid the chaos and cacophony of Kunming's ongoing and ubiquitous urban renewal is the need for green space. The city does have a few very large parks, but they are spread too thin, sometimes a bit dilapidated and often full to the point of absurdity. 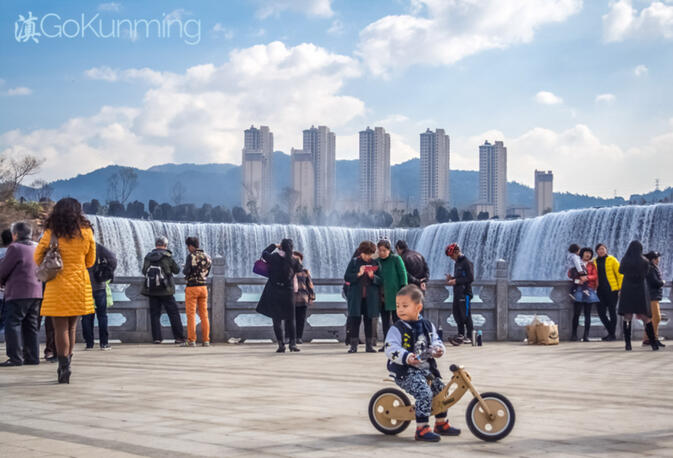 It was with not a little happy anticipation then, that we welcomed reports of the Spring City's most recently opened public space on New Year's Day. A few weeks passed from the time of the Kunming Waterfall Park (昆明瀑布公园) official opening and when we finally decided to visit. Because of the deluge of glowing media accounts it was with a slightly jaundiced and cynical view that we set out. 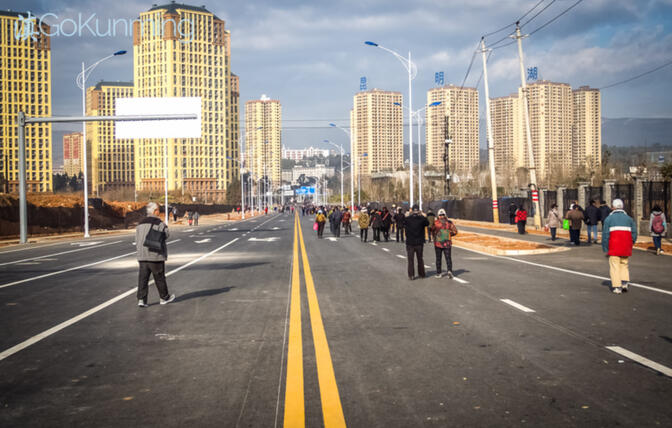 The waterfall is not particularly difficult to find, but the way their is a bit silly. For us, it involved taking the subway, hopping a bus and then walking for almost a kilometer. This last step is actually required of everyone, unless you pay ten yuan to one of the fleet of electric scooter or motorcycle drivers waiting in ambush outside a cordoned-off entryway. 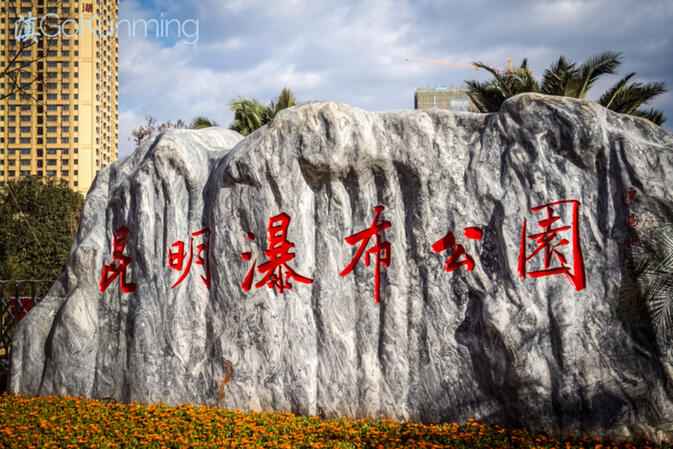 And what an entryway it is — a brand spanking new road with six freshly paved lanes extending for more than 800 meters. It is, of course, not open to any traffic, except for pedestrians and the previously mentioned squadron of motorbikes. Most people walk, as we did, from the road to actual entrance, which is marked by a giant chunk of marble emblazoned with the park's name in red. 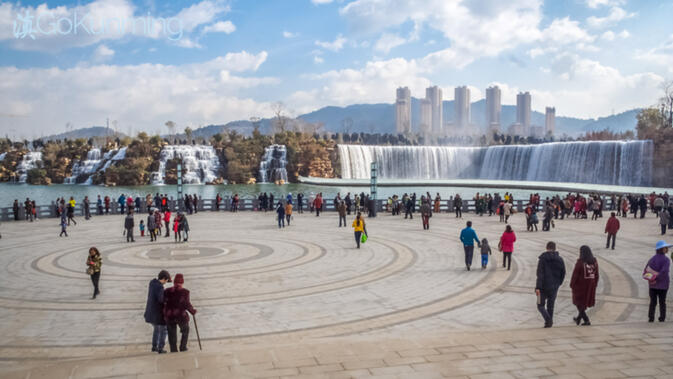 It is about the time you see the sign that you begin to hear the pleasant telltale hiss of large amounts of cascading water. Down a few steps, and out onto a plaza that leads to an even larger plaza, we caught sight of the waterfall for the first time. It was impressive. 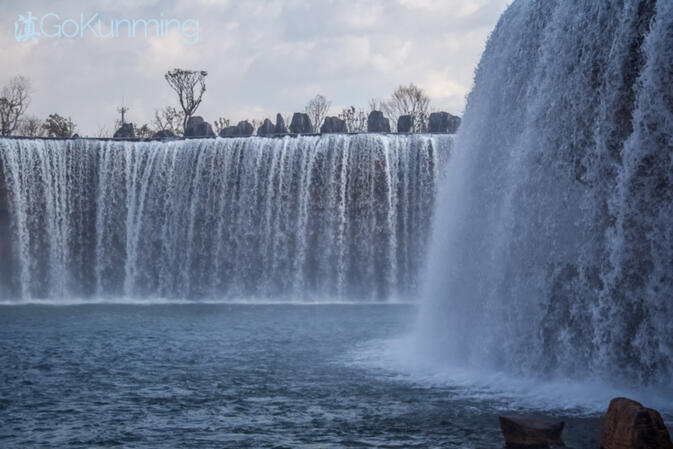 Excited local news reports gleefully describe the waterfall as a 400-meter wide triumph of engineering, and upon seeing it, I wouldn't tend to disagree. It is reputedly — depending on which source you happen upon — the longest or second longest man-made waterfall in Asia. 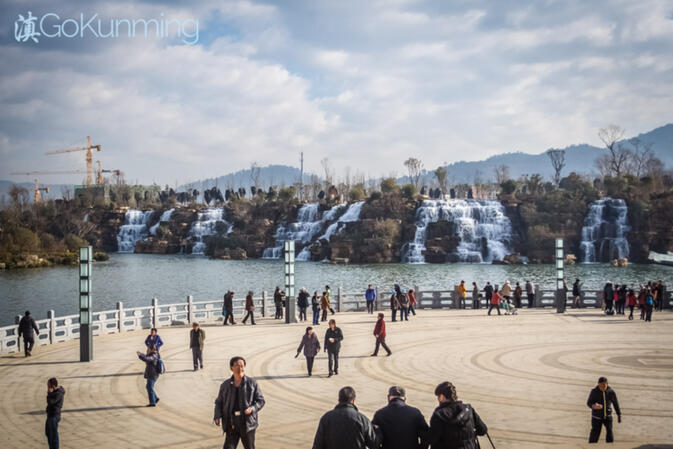 The waterfall is separated into two parts, a cascading section on the far left adorned with rocks and plants, and a second, more elegant portion, where the water simply falls 12 meters straight down into the lake below. Mist from this area drifted pleasantly up into the morning air, creating ephemeral rainbows above us and the gathering crowd. The lake below the waterfall curtain has a glass-plated bridge curving enticingly across the watery expanse. Unfortunately, when we visited, the walkway was still awkwardly covered in the plastic wrap in which is was originally delivered. One day in the future, that plastic will be removed, either by workers or nature, and the bridge will open to visitors. Until then, the walkway — which crosses the water and leads to what can only be imagined as a charming path directly behind and beneath the falls — is closed. Wanting to know where all this water comes from, we headed uphill past a monstrous glass and steel visitor's center. Welding torches flashed from inside, revealing an unfinished and cavernous five-story concrete skeleton that will eventually — perhaps at the same time the nearby bridge is freed of its plastic swaddling — open to the public and command wonderful views of the falls. Above the visitor center, the sheer size of the waterfall park becomes evident. Cresting the hill brings a sizable man-made lake into view for the first time. Ringed by a broad stone walkway and rolling manicured hills that will be lovely come summertime, the lake is as placid as the face of a mirror. Approaching the far northeast end of the reservoir, small eddies and whorls betray, at least slightly, the origins of the water. No obvious tributary flows into the Kunming Waterfall Park. Instead, the water is silently pumped in from the faraway Niulan River as a subsidiary part of the truly massive Dian Zhong Water Diversion Project (滇中引水工程). As it appears on the surface, all of this water simply seeps out from underneath a broad public area embellished with the statues of nine protective dragons taken from Chinese mythology. However, the simplicity of such large quantities of water seemingly materializing from nowhere is belied by the park's price tag, a somewhat sizable 1.1 billion yuan (US$167 million). Was the financial outlay worth it? Perhaps. The views certainly lessened our cynicism. The waterfall is both novel and beautiful, and should be quite the tourist draw for years to come. As a bonus, the diverted Niulan River water exits the park into the Panlong River, and is expected to increase that waterway's capacity while adding fresh, clean water to the perpetually green Dianchi Lake. Maybe money is not the proper focus anyway, as the Spring City now has yet another public space for its growing population to visit. The park surrounding the waterfall is also a lovely place for families living in the city's north to gather and relax against a backdrop the likes of which Yunnan has never seen. The Kunming Waterfall Park is most directly reached by taking either bus Z1 or Z46 and getting off at the Tianyu Lanshan Xiaoqu stop (天宇澜山小区). However, we took Metro Line 2 to the Longtou Street Station. Turning right out of the station, we walked to the intersection of Beijing Lu and Fengyuan Lu, then took another right turn and continued walking until we found the next bus stop. Taking either of these ways, you will want to look for Nongke Bei Lu (农科北路), the previously mentioned road not yet open to traffic. Walk down this street until you see the waterfall park sign on the righthand side. You can't miss it. If you like walking, best way to get to falls is just walking on very nice new parkway along the Panlong River. Just do not go on weekends or holidays. Also i went one evening for a walk thinking the falls would have lighting and it was dark. Sign 2 weeks ago gave hours for viewing falls from 9-5.

The falls will oxygenate the water which flows into the panlong river which is a good step forward for a cleaner Diachi.

They lack benches and greenery. It's mostly cement walkways. To me not very interesting except for the waterfall. Quite boring and not worth seeing twice unless you live in the neighborhood.

So that's where all the water went.