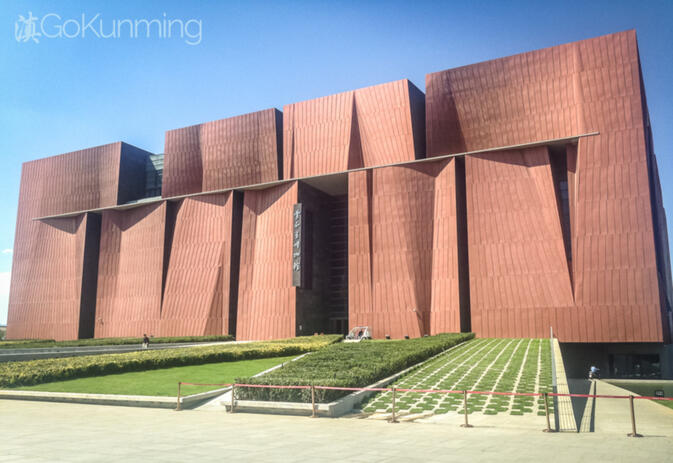 Over the weekend, I was invited by a friend to visit the Yunnan Provincial Museum. A bronze-age artifact exhibit had recently opened, and it seemed like a nice way to spend a Saturday afternoon. Previous to this, I had only been to one other museum in Kunming, so I did not have much in the way of expectations.

The first problem in getting there was the lack of signage. It became a game of trial and error to find the location. Eventually, I found the place, but gaining entry became the next issue. I went in through the southwest gate, but was immediately stopped by a guard. Although I could see the ticket office from the gate, he told me turn around and go to the other entrance. After much grumbling, I went to the northeast gate. There too, I was told to turn around and go to yet another gate. The third time was the charm, and I was finally let through at the northeast corner. 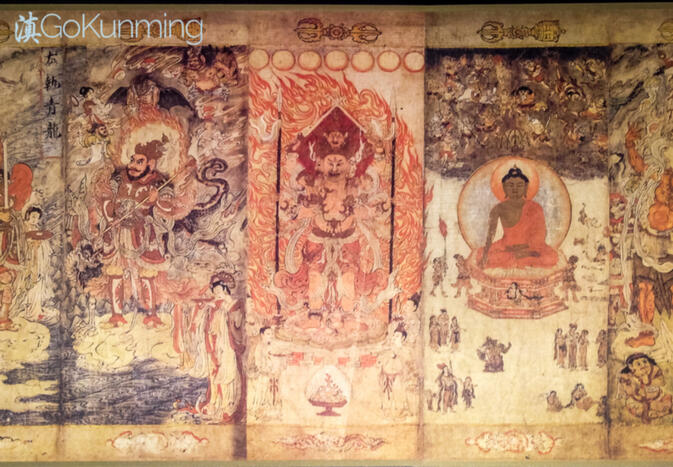 Once I was in the complex, I realized just how huge it was. The museum itself is an enormous, copper-colored, geometrically complex cube. Surrounding it was probably the largest open space I have seen in Kunming. On one side was a grass field with walkways throughout, while the other was a concrete square that would make Stalin proud.

It turned out a ticket office was somewhat superfluous, since entry was free. It also made what came next seem rather irrelevant, as well as confounding. First, was a guard in front of the doors waiting to examine the ticket, as well as hole punch it. Then, it was through a metal detector with another guard waiting to check the ticket again. Tests passed.

Going inside, the interior was as well-designed as the exterior. For a museum, though, it has too much empty space. The lobby was huge, but only one small lost and found kiosk, next to escalator, made any attempt to fill the void. Off to the side, there was a café. It's stock included exactly six bottles of Corona beer, two pre-made sandwiches, and one slice of some sort of cake. 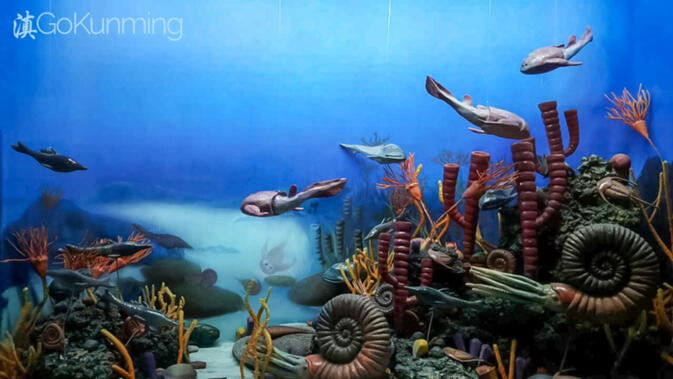 Moving quickly past the lobby, I first went to the exhibit labeled 'modern art'. The exhibit's formal name, The Art of Serene Oil Painting, an Exhibition of Liu Ziming, did not make me confident of its modernity. Her work ranged from the 1920s to 1980s, and very little of it had anything to do with Yunnan province. The exhibit gave way to one emphasizing original and recreations of Qing dynasty scroll paintings. This all took twenty minutes to see, and made up the entirety of first floor exhibits.

The second floor had much more to see. The first area, the 'kid's exhibit', focused on geology, dinosaurs, and evolution. Recreations of Yunnan-discovered dinosaur skeletons were impressive, as was an area on the Chengjiang Cambrian explosion. There were displays on the resulting geologic rock formations, and on the subsequent wildlife inhabiting them, which were mostly strange aquatic animals. 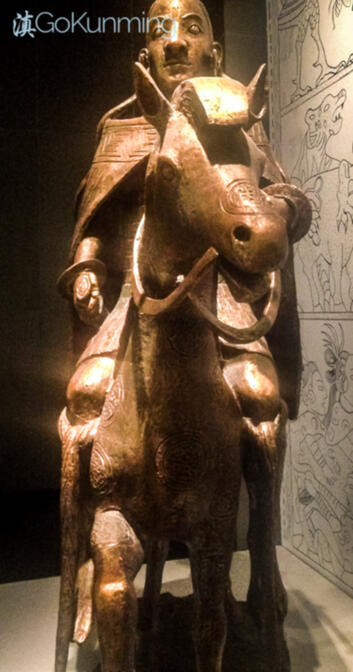 If nothing else, the area was definitely well-designed. On the other side of the floor, and the highlight of the excursion, was the Yunnan bronze-age artifact section. This was clearly where the curators' energy had gone. Surprisingly, it was one of only three exhibits in the whole place that dealt specifically with Yunnan. I do not know enough about the subject matter to be authoritative, but the collected statues and sculptures were very striking.

On the third and final floor, the only exhibit was on devoted to the Nanzhao Kingdom. More or less, this was a simplistic introduction to the kingdom's history. There were recreations of ancient scrolls, dioramas depicting the major events of the empire's formation, and several displays which illustrated long-forgotten military campaigns and subsequent expansion. At the very end sat an area dedicated to statues of Buddha from the Nanzhao era, as well as examples the kingdom's gold work. With that done, the entire museum had been examined. It took roughly two and a half hours.

It is worth noting that, despite the huge size of the building, and the fair number of exhibits, comparatively few people were actually in the museum I was alone in the art and Qing dynasty areas. In the Nanzhao section, only a handful of people milled about. It was only the kids section and Bronze Age exhibits where there were a good number of people in the vicinity. It was obvious that exhibits devoted to children were the major attraction.

Overall, the Yunnan Provincial Museum has clearly put more effort into some exhibits than others, possibly at the expense of a cohesive experience. If they found a way to fill up the empty spaces, provide translations beyond titles, and make their location a bit better known, then they would likely get greater attendance. As it stands, the building itself and its grounds make the trip worth it by themselves. That all said, you will first have to find the correct entrance. 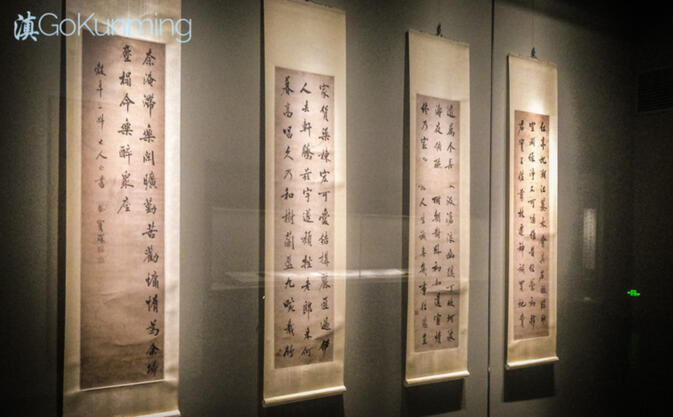 I was the friend that dragged Jordan down. It's not a bad museum as far as space goes, but the exhibitions are pretty lame. The lack of translations is grating, as is the wholesale abortion of any attempt at a timeline of Yunnanese history. It's as if the curators were afraid of political backlash for actually laying out history in an honest fashion.

The Nanzhao stuff is pretty detailed, and there is a good selection of bronze age items - far more than the original provincial museum in town.

Overall it's worth a look if you're in to history, but a pain to get to.

One is drawn to question whether the remote location is intended solely to dissuade visitors or was purely a victim of political wranglings.

Good effort by some of the involved, I would say, but an overall poor showing given the investment and background, all said.

Huge areas of interest such as the bronze-age discoveries at Jianchuan, the neolithic paintings in Lincang and the historic connections with Vietnam's northern region are largely ignored. As are any links to Hindu religion in the Nanzhao period (evidenced in carvings at Shibaoshan), the historical seige of Kunming by Tai troops from what is now modern Shan state, Burma, the amazing influence of Zheng He, the history of boats on the central Yunnanese lakes, the 'qi' tiles of Baoshan, and so on...

I wish Yunnan would get a clue about how to market their amazing history and drop the political wankery.

Does this museum replace the old provincial museum on Dong Feng Lu? If so, does anyone know what will happen to that place?

The old museum is a Provincial level historical site of Wu Hua District. You will notice a black stone marker to the right of the museum. It will remain in place and be protected.

If I recall correctly I read the sign at the entrance to the old museum site on Dongfeng Dong Lu a few months ago, which suggested that the powers that be were in the process of "depoliticizing" the contents of building by turning in to some kind of modern fine art gallery, no doubt with a carefully audited inventory to raise no pesky questions about historical independence and ethnic identity.

Voltaire: Sure you're not reaching a bit there? The whole collection of the old location is being shifted to the new site, and the old facility will now house an already-existing art museum that will now expand its collection.

Political sterility may be an issue with official museums, but I don't see the shifts in locations having any central role in that.

Xiefei: Of course, we will probably never know the real reasons, but the result is the same. Absolute depoliticization of the site, the movement of anything still suggestive of a pluralistic history out of town to what amounts to the middle of nowhere, and the vaguaries of apologetics resulting from a lack of transparency in government decision making. What next? Personally, I expect to see a coffee shop in former exhibition space.