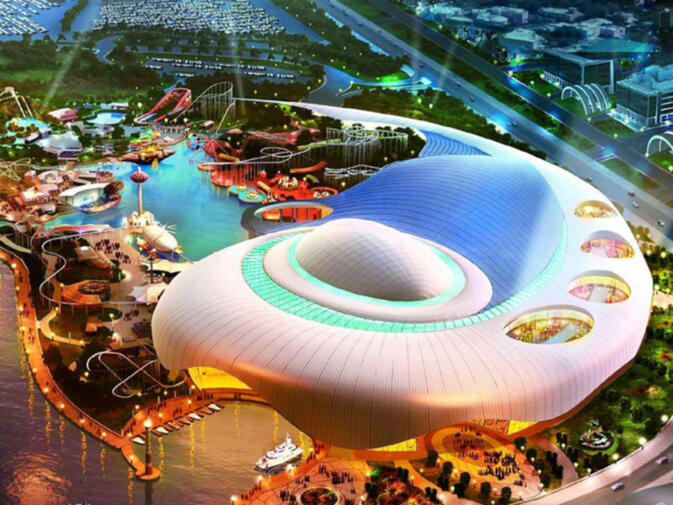 China's richest man is looking to expand his gargantuan real estate empire by diversifying into the tourism industry. The first major step in this direction was taken during Mid-Autumn Festival, when Wang Jianlin (王健林), Chairman of Wanda Group, oversaw the opening of a multipurpose resort development in Yunnan's Xishuangbanna (西双版纳).

Speaking at the opening ceremony, Wang revealed his company will invest 95 billion yuan for further tourism and business development in the province over the next four years. Quoted by the South China Morning Post, Wang said with such a large outlay of funds, his company plans to "...revolutionize Yunnan's tourism industry".

The success of that revolution will definitely be aided by the money Wanda has already invested, but other factors loom large. Chief among these is a spur line on the oft-delayed Kunming-Singapore Railway. When and if is is built — some forecasts predict an opening date of 2018 — the high-speed railroad would connect Yunnan's capital to Jinghong in just over two hours. The city currently has no direct rail link to Kunming.

Currently, Xishuangbanna Prefecture receives an estimated 13 million travelers yearly. That number is expected to rise significantly over the next five years as under-construction and proposed infrastructure projects are completed. For its part, Wanda is banking on a surge in both tourism and investment, offering newly built villas and condominiums located inside the Wanda International Resort Xishuangbanna for between 4,500 and 6,000 yuan a square meter.

The development conglomerate is not only focusing on Yunnan and what is commonly called its "untapped tourism resources". This year alone, Wanda has signed other travel development contracts in Guangxi, Guizhou, Henan, Liaoning and Sichuan provinces worth 680 billion yuan (US$107 billion). Completing the circle connecting tourism and real estate, Chairman Wang has also hinted his company will soon delve into China's cutthroat airline industry.

Wow, yes, that is just awesome! So inspiring to see the masterminds behind Wanda come up with such an out-of-the-box approach! While the rest of the country is caught up trying to make as much easy and dirty money as possible to indulge in vulgar entertainment, they go out of their way and turn the tide with this true revolution! Can't wait for the fragile ecology and endangered traditional cultures of Xishuangbanna to take this all in. Straight up the ass, Wanda style! Beautiful...

schools in a resort. wow.

There may be a miniature Big Ben, Eiffel Tower and such too. Wow. Its great. Previously - take for example - plenty them English people were sobbing about missing Big Ben and a real high tea around, but now, now soon there will be a taiwanese milk tea and a miniature Big Ben in Xishuangbanna - people can feel pretty OK. Not missing home and locals can get a feeling of the real one.

Jinghong has a lot of new stuff in the last 5-6 years. Lots of building, new attractions, all great stuff.

Last time I was in Banna I asked about waste water treatment. No one knew anything about that. Guess the Mighty Mekong will handle it.

why do they need several schools and a hospital? I'd like to think they are for the workers children... but I doubt it somehow.

Guess the mighty Mekong will flush it into the neighbour's domain.

Built up on gangsterism; typical china.

@Mike: I don't like this kind of development much, but why do you say it's built on gangsterism? Granted there are sure to be gangsters in real estate, but what do you know about Wang & Wanda?

At Alien.
If anyone or any organization makes legit money in china they will get pushed out of their market shares or be victim of some kind of extortion.
Therefore it's quite reasonable to assume that any long term organization is related to, or is a leader in gangsterism.

This article needs a serious correction. Wanda is owned by the Chinese government, run semi-privately and invested in by shareholders, investment groups and also the government.
Wang Jianlin is rich and he is the chairman. He is not the owner and it's not "his empire".

OK, depends on one's definition of gangsterism, I guess. There's certainly plenty of money made through connections between government & private investors that I'd consider illegit.