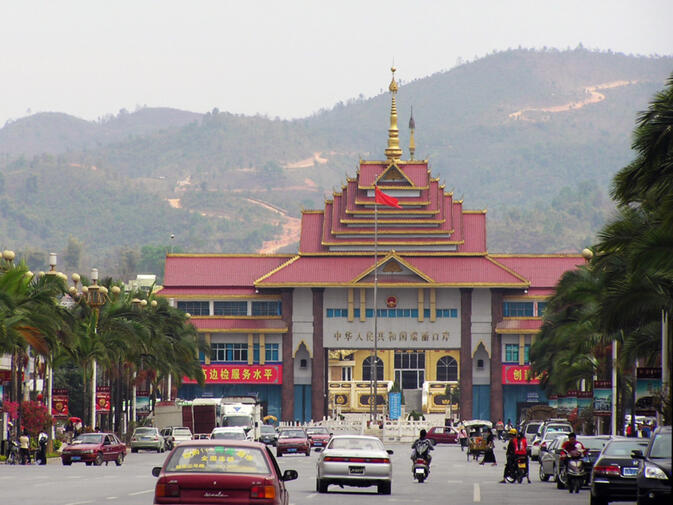 Government officials in the Yunnan border town of Ruili (瑞丽) held a forum this week discussing how to legally protect the city's name. One option, openly supported by the many at the July 5 meeting, is to sue companies trading on the Ruili name in provincial courts for intellectual property right infringement. However, it remains unclear if such litigation is even possible.

The discussion included talks given by lawyers and experts, and featured a lecture by professor Ning Lizhi (宁立志) of the Intellectual Property Research Institute at Wuhan University. Ning explained the current, and somewhat confused state of copyright laws in China, noting:

Place name trademark registration is very complicated. The name of a place belongs to the public domain, while trademarks belong to private domain. Both are controversial from the beginning. In terms of legality, it is undetermined if the name of a place can be used to register a trademark. In principle, such a measure is prohibited, but legally it is still uncertain. That is why Ruili, trying to protect its city name, will possibly set a legal precedent.

So why does Ruili, a city of 140,000 on China's semi-lawless border with Myanmar, need to protect its name in the first place? According to municipal officials speaking at the seminar, Ruili is gaining regional importance due to its involvement in the planned Bangladesh-China-India-Myanmar trade corridor — which includes a rail link to Dali scheduled to open in 2017 — and its inclusion in President Xi Jinping's Belt and Road Initiative.

The city, those in favor of intellectual property protection argued, has become a brand name representing "beautiful scenery and pleasant weather" as well as developing a reputation as "an Emerald City trade hub with multi-ethnic and multi-cultural" characteristics. Protecting such branding, they continued, "has become an urgent task at City Hall". But why exactly, remains something of a mystery. No mention of lost revenue or misrepresentation was broached at the meeting, leading some on social media sites to question whether the entire affair is a bizarre effort to generate money.

Singled out for possible future legal action was women's fashion magazine Ruili, which was founded in 1995 and shares the same Chinese characters as the city's name. Other speakers at the seminar referred vaguely to unnamed cyber squatters, who are apparently hoarding domain names including the words "rui" and "li".

Professor Ning recommended establishing a specialized agency within the Ruili municipal government tasked with protecting the city name, entering into litigation, identifying copyright infringement and "drafting warning letters" to perceived violators. For a city with a long history as an entrepôt for endangered wildlife, jade, rare timber and illegal narcotics, securing the intellectual property rights of its good name may be a tall order indeed.

If successful, does that mean restaurants can no longer serve that famous duck dish under its current name? All regionally name products can no longer be named? How can we differentiate an ordinary sausage and one from Taiwan?

Can the provincial government copyright Yunnan so that the Ruili municipal government can not promote the fact that they are part of Yunnan for fear of being sued for copyright infringement?

All this is just silly.

I agree. This coming from a country that thinks 'intellectual property rights' are just a suggestion. How does it feel?

I haven't been to Ruili, but I know other who have. "Beautiful scenery and pleasant weather" weren't their biggest impressions! I think Lonely Planet described it as something of a cowboy/bandit town, best avoided. Anyone actually been there recently?

Turn the tables on IP laws and the Chineese nitpick over any minor detail.
This countrys screwed....

How embarassing - Anything for money. No honor, no integrity, just GREED.

I'm with Tonyoad - to me it's just a bit silly, and I doubt if anybody's really embarassed.