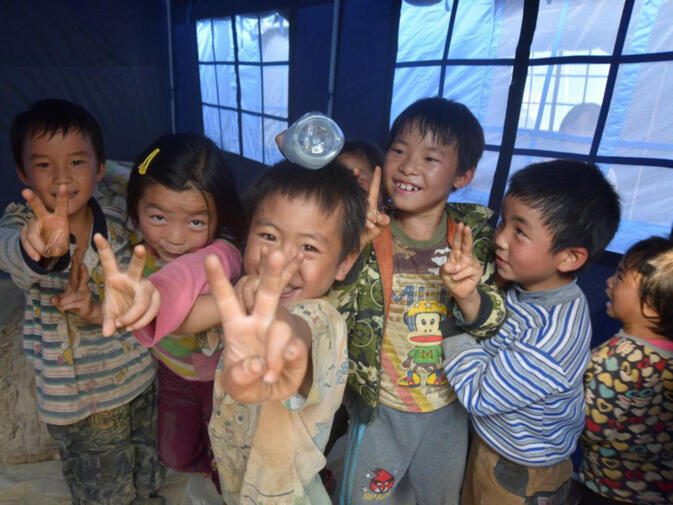 Reconstruction efforts in northeast Yunnan following a devastating 2014 earthquake remain ongoing, but several projects funded with donated money have recently been finished or are nearly complete. The two largest of these will replace public school facilities that were entirely destroyed in the quake.

The first of the new buildings to open its doors is a "safety experience classroom" built largely with money donated by Sony Corporation. The China Children and Teenager's Fund and the Zhaotong Women's Federation also contributed to the center, which, in addition to a classroom devoted to safety education, includes a library.

Students attending the opening ceremony were given brief lessons in first aid and participated in an earthquake readiness drill. The building will be used to host similar classes and in the future students from nearby school districts will be bused in to attend them.

In the wake of the August 2014 Ludian earthquake, Sony pledged one million yuan (US$161,000) for the construction of several identical centers in villages that suffered the most damage. The new safety experience classroom is the first of its kind in Yunnan, although more than two dozen exist in rural villages across Sichuan.

A separate project funded by Singapore-based charities is expected to open in the near future. When finished, the project in Ludian County will house beds to accommodate up to 1,200 students, meaning the area's primary school children will be able to stay near their campuses during the week — thus eliminating the necessity of long and often arduous return trips home through the mountains each evening.

According to Singapore's Ambassador to China, Stanley Loh, "...it's not easy for primary school students [in the area] to go to school. With the hostels, many of them no longer need to spend hours getting there". The dormitories are being built at a cost of five million yuan (US$800,000) and should be ready for use by summer.

Hundreds of millions of yuan have been donated to earthquake victims in Ludian — an estimated 470 million yuan given by corporate donors or raised by community fundraisers. The magnitude 6.5 earthquake laid waste to a large swathe of northeast Yunnan on August 3 of last year, killing 617 people and destroying 42,000 homes and other buildings.