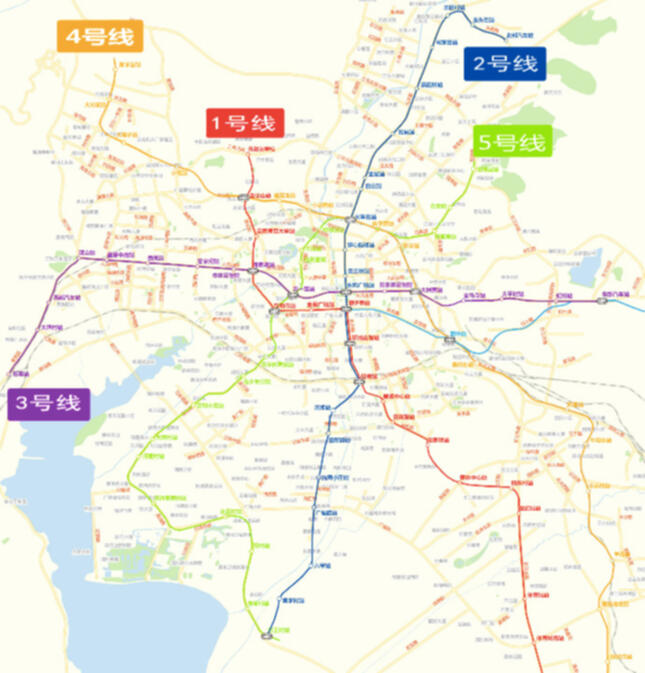 The seemingly unlimited supply of development money made available to Spring City urban planners shows no signs of letting up. A new report released by the municipal government reveals 340 billion yuan (US$54.3 billion) has been allocated to "accelerate" construction, especially on the city's metro, railway and highway systems, over the next five years.

Referred to as the "Comprehensive Transportation Campaign" (CTC), program costs include having at least six fully functioning metro lines by the year 2020, up from the current number of two-and-a-half. When finished, the above- and below-ground sections of the Kunming Metro will cover 206 kilometers. Three additional lines are also under consideration, but will not be finished by 2020.

It is not only the metro that will receive huge amounts of funding. So too will railway ventures designed to make Yunnan more connected not only to the rest of China, but also to its Southeast Asian neighbors. Among the 12 railroads receiving CTC money is a line that will one day connect Lhasa to Shangri-la and then Kunming, a bullet train to Shanghai and other railways linking up with Chongqing, and cities in Guizhou, Myanmar and Vietnam.

In addition to the expenditures for the metro system and vast railway upgrades, the Comprehensive Transportation Campaign will add more than 20 newly built or drastically expanded traffic expressways radiating outwards from the Spring City. The network of roads is planned to connect all of the "economically important cities of central Yunnan" and in some cases drastically reduce driving times.

One other key initiative involves logistics and Dianchi Lake. To facilitate all of the planned trade coming into and leaving Kunming once the aforementioned projects are completed, an enormous "integrated transport hub" is under consideration for Chenggong. If approved — and it appears the money has already been set aside — a 458 million yuan (US$73 million) shipping and receiving facility would be built on the shores of the lake, complete with a wharf.

The CTC's 340 billion yuan price tag should provide a significant economic jolt to a city already in the throes of a long-lasting and frenetic building boom. In 2014, the entire province saw 70 billion yuan earmarked for infrastructure work — a number almost matched by annual CTC outlays for the Spring City alone. It appears provincial leaders, and those in Beijing, are still quite serious in their intentions to transform Kunming into a hub connecting greater China with Southeast Asia and beyond.

Forecast: Dust for the next 10 years.

And for the love of god, prioritise the currently useless line that should run all the way to the airport! Anyone notice that it doesn't look like they have left enough room for the train just West of the East Bus station? The raised bridge appears to be a little close to the vehicle bridge above it... maybe this was why they haven't done anything, somebody screwed up and nobody wants to take responsibility?

You can sail somewhere interesting from Dianchi?

Somebody's pocketing half that money for sure.

@AlexKMG: I was thinking the exact same thing. What use could Dianchi possibly have for a wharf?

Rather than a whole lot more local highway interchanges and aerial roads, etc., I'd be happy if they'd tax the hell out of private cars and use the cash to do something about the air, water, waste disposal, etc., but I have a strong feeling that nobody in government is going to listen to my suggestions. Public city transport, yeah, okay, despite the expense.

DIANCHI
1. Wharf
2. Luxury fresh water yachts, along with all the jobs and infrastructure required to staff (skilled and unskilled), operate, and support such luxuries.

The Chinese dream is ironically somewhat much like the American dream, get rich, show off how rich you are, and nevermind everybody else.

@Haali: Yes, but I'd call it the modern competitive/capitalist dream - culture of the country reflects a more fundamental reality (not that other historical class societies didn't present something similar).

I believe that being part of WTO means that you cannot tax the hell out of private cars.

Look at Vietnam: a two-wheeled paradise until WTO forces them to lower tax on imported cars, which means everyone is going to start driving their cars which means that paradise is going to hell in a handbasket.

So don't blame China alone - blame all members of WTO, the car-producing ones first.