Shangri-la to nowhere: A week on the edge of Tibet, part 2 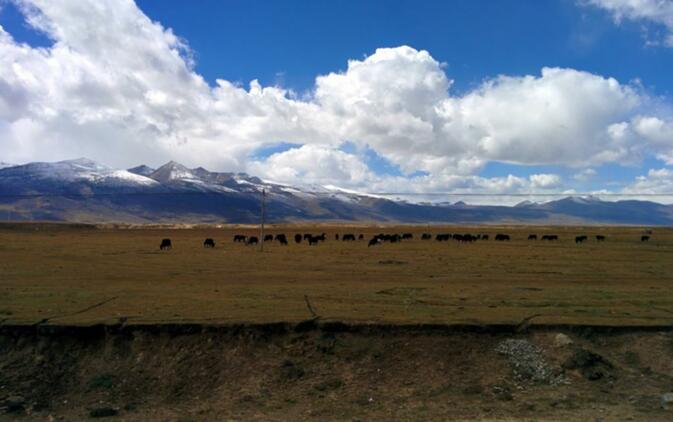 Editor's note: GoKunming contributor Sander Van de Moortel first landed in Yunnan in 2011 after taking a wrong turn on a bike trip through Vietnam. Comfortably trapped in Kunming by his linguistic ambitions and his somewhat complicated relationship with the country, he takes every opportunity to explore southwest China's colorful patchwork by bicycle.

Van de Moortel is now responsible for communications at the World Agroforestry Centre in East and Central Asia. To check out more of his writing, view his blog, A World of Nonging, where you can also see exact GPS coordinates of the trip below. The first installment of this article can be read here. 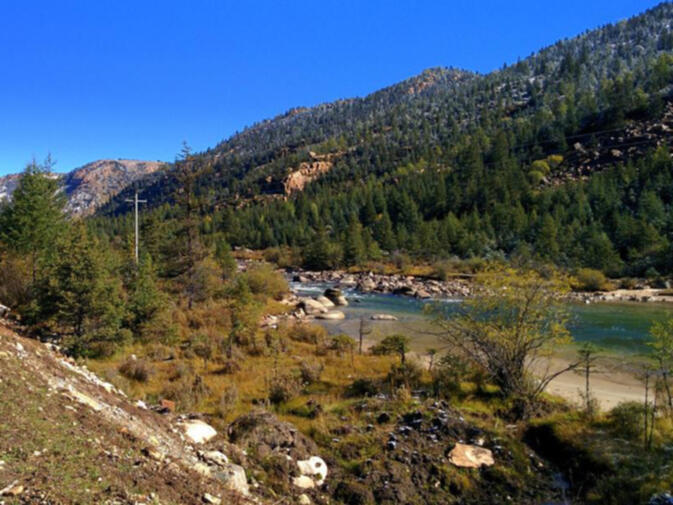 We're startled awake by a voice in broken Mandarin. Instant noodles? Reality slowly sets in, the image on our retinas solidifies. We stare right into Sandei's friendly face as he wishes us good morning, lights the stove and sticks the kettle on. He points at the packages of beef-flavored instant noodles and announces with an apologetic gesture that he has to go. We gather our stuff, as well as our thoughts, while he shuffles out. The lawn outside the building is covered in brittle frost. Our breath forms woolly clouds in the morning chill. Failing to find Sandei at the monastery, we buy 100 yuan worth of karma from the monastery's donation box and head off.

At Sangdui's limits, someone's bent the road upward and we meekly follow suit. It being the National Day holiday, traffic is a lot busier, with SUV after SUV screaming past us. There are license plates from Chongqing and Chengdu, but also Liaoning, Hainan, Xinjiang — the whole country is here, overtaking each other with roaring, oxygen-starved engines at irresponsible speeds. Up the road, a few brightly-clad tourists confusedly stand around their freshly crashed cars. We hope they serve as a warning for the drivers behind them.

We reach what feels like a plateau, but a glance at the GPS elevation profile reveals a slow incline. Young women have their pictures taken against this bewilderingly barren backdrop or in front of the tiny mountaintops that stick out behind the horizon. You really are on the roof of the world when all surrounding peaks are at eye-level. We regularly stop to feed, gaze, dance and recover. 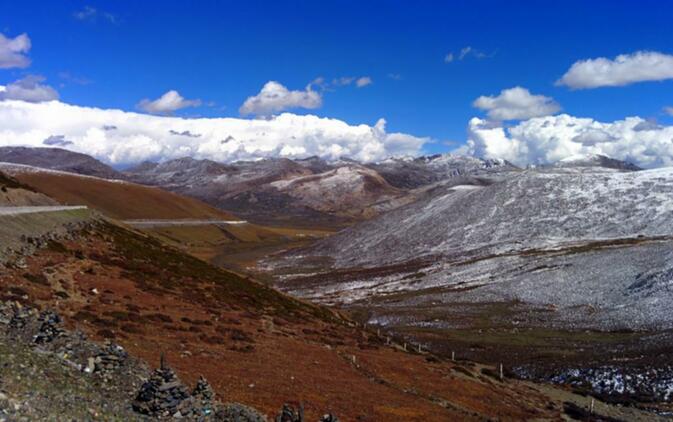 After the 4,600-meter summit, we are happy to drop to more oxygen-rich lands. Ravens escort us on the way to what turns out to be just a small dip in the climb. Large chunks of meat are drying in the sun at another daoban. We attempt to buy some more water, but a policeman comes out and hastily slams the door behind his back, smothering the gambling noises inside. He offers us a few free bottles from the back of his car.

One hour and barely five kilometers later, we finally make it over the pass, lashed by wind, snow and hail. We quickly commence our descent to more comfortable zones but this time the weather doesn't let off. We'll just have to grin and bear it. We're riding on the best road surface since the beginning of the trip, and we lose altitude so quickly it makes our heads spin. Shortly before we reach the low end at 3,600 meters, we're able to set personal speed records of 71 kilometers per hour.

When we reach the Xiongba (雄坝) plain, the hail stops and instead we are struck by a fierce gale that nearly pushes us back up the hill. Surrealistic clouds do unspeakable things in the sky, creating a feast for the eyes. We painstakingly make our way across the plain and find a small fish restaurant annex with lodging near the river. Rooms are 30 yuan a person and very basic, with no shower and a dumping rack for a toilet. The roof and the side wall are mere cardboard and tarpaulin with a few holes in them, but there's an electric blanket so we'll be fine. We have a delicious fish hotpot and several beers. 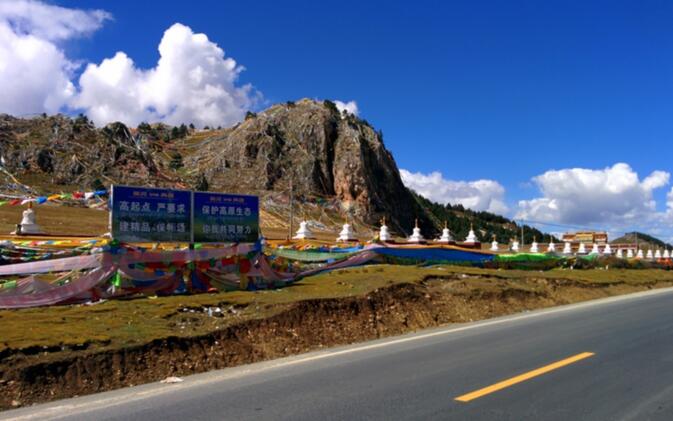 One of the more endearing things about Tibetans is their way of indicating something. Instead of raising a bony finger and pointing, they simply purse their lips and shoot it a kiss. It takes us some time to realize that they mean nothing intimate. We wolf down a bunch of noodles and commence our third showerless day.

We pass a few villages with cultural points of interest clearly indicated on granite stones: "Rainbow clan, 500 meters that way". We give the tourism a miss and continue to Litang (理塘). It's just a repetition of yesterday, a fairly smooth downhill and a long, windy plain to cross before entering town. We head out for food and shenanigans. Litang is a bit of a dump, the stark contrast to its splendid surroundings further adding to that perception.

Upon closer inspection, however, it turns out to be more than a relay hub for tourists. It is indeed the beginning of what the Chinese dub their "Wild West". Nomads with large daggers — more like sabers — attached to their belts dart through the streets on motorbikes. People look a lot more grim than elsewhere, and we half expect to see a shooting duel while we're munching on yak burgers. Inspired, we conceive of the rash plan of sending our bicycles home and buying a motorbike to return to Kunming.

That night, we find what seems the only Tibetan restaurant in town. Worrying volumes of laughter emerge from the kitchen, intermittently followed by an uncomfortable-looking person reeling between tables and muttering excuses on the way out. The staff is visibly and audibly drunk, and the food just so-so. The highlight is a huge portion of frozen yak carpaccio. When we get ready to go, the extremely flirty owner wishes us good night while holding up our coats like a five-star hotel lackey. 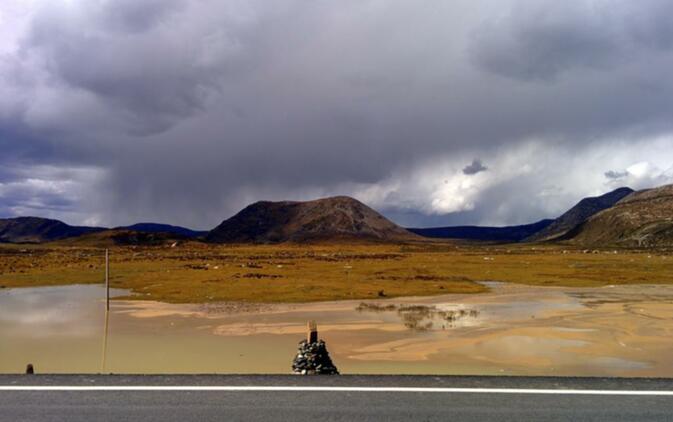 Our luggage and bicycles go back to Kunming for merely 800 yuan through a courier. Next step, find a cheap yet suitable motorbike. Options include a brand-new but brand-unknown chopper-like machine for 3,400 yuan, a seemingly new Wuyang-Honda for 4,000, a Jialing for 2,000 or a rusty old Wuyang for 1,300. We very wisely opt to buy the last of these although the mechanic won't guarantee it will last until Kunming.

We get new gloves and helmets, fill up the tank and ignore the smirk on the mechanic's face as we sputter out of the garage. We're brimming with childish excitement. We know our chances of getting back to Kunming on this death trap are very slim indeed. But six days on the road, scaling mountains and defying snow storms has germinated in us a combination of hubris and rash boyishness.

We put on a total of eight layers of clothes each and then elicit a couple of laughs as an unintended wheelie nearly launches our motorbike into a flock of SWAT police. Upon regaining control, we make an elegant exit out of town and ride towards the sun that is slowly rising over the Litang plain. 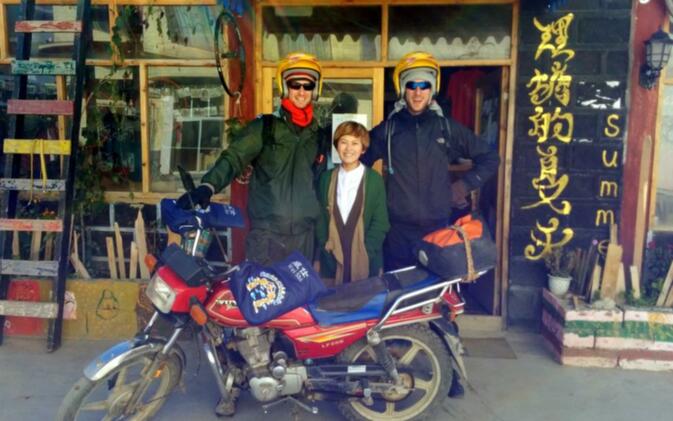 Everything works smoothly until the engine stalls near the top of our first big hill. Luckily, we have a long downhill that extends almost to the next village, where a motorbike mechanic fixes the problem, a broken oil cup or something. On the next hill, the exact same thing happens — now with the spark plug cable melting and smoke pouring off the engine.

This isn't going to be our day. We roll back down the hill and end up walking the bike to the nearest mechanic. Diagnosis, engine losing power. We half-expected something to go dreadfully wrong and are mentally prepared to start hitch-hiking. But a customer at the mechanic's offers to sell us his bike for 1,900 yuan if we give him the old one.

Boyishness still fermenting in our stomachs, we accept the deal and spend everything we have on this other bike and ride off. It works perfectly, effortlessly taking us across the first mountain pass. There's a faint smell of oil not uncommon with older bikes, but it's finally working! Our motorcycle dream is coming true! 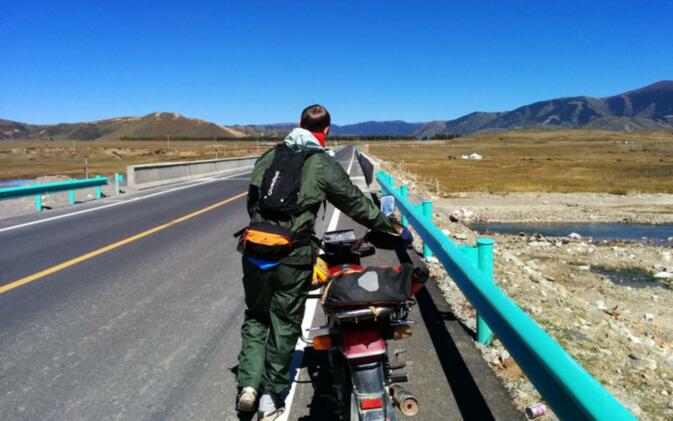 Or, as we find out a little later, it isn't. Halfway up a pass to the plateau, the driver's foothold drops onto the road. Bungie cables and string do the trick. We continue our ascent until we spot a trail behind us. We've just passed a spot where workers were painting the roads, so we figure it's just some paint sticking to our wheels. But the trail doesn't disappear with time, and there's also an increasing smell of...GAS! GAS! Quick boys! An ecstasy of fumbling with gloves, taking the clumsy helmets off and sticking fingers into where once sat a fuel valve. We find the thing loosely hanging around on a tube and try to screw it back on, to no avail.

We leave the bike by the side of the road and hitch-hike to the next town, initially intending to get a replacement but later, as darkness falls, abandoning our motorbike dream. Instead, we end up taking an SUV to Shangri-La with a group of hikers.

Some of them are from Liaoning and their white faces contrast sharply with the dark and rough visages of the Tibetan drivers, who matter-of-factly explain their culture to us baffled tourists. It's endearing to see Chinese people just as ill at ease in their own country as us foreigners. We hoover dust through our noses on the drive back, waiting for diggers to clear the road and trucks to find their way through the heavily rutted mud, before reaching Shangri-La. A bus finally takes us back to Kunming.

"Ravens escort us..." I think they were following you in hopes of a meal. Too bad your motobike didn't make it back to Km, but glad you guys did.