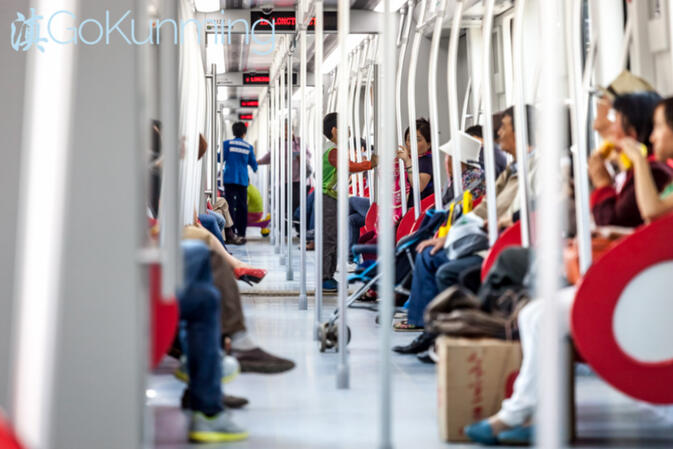 The Kunming Metro is an unapologetically utilitarian affair — trains quietly run on time and are generally comfortable and climate controlled. But they are also clinically white, fluorescent-lit cars that hum between matching, uniformly bland stations. Leave it to a few imaginative Kunmingers with a penchant for public pole dancing to spice things up, if only for a moment.

Passengers traveling south toward Chenggong on the Kunming Metro were treated to an impromptu performance Wednesday when a middle-aged woman stood up in a partially filled subway car and began dancing. As curious commuters gawked, the woman, identified in media reports only as 'auntie', launched into an extremely clumsy attempt at a pole dancing routine.

After several failed efforts to raise herself up on the pole, the woman settled on spinning lazily around it before ending her jig with a bit of an exaggerated curtsey. Not to be outdone, a male passenger followed her by grabbing the pole, launching himself into the air and then whirling somewhat expertly around the support.

A short and shakily shot video of the scene has generated quite a bit of interest on Chinese social media, with several comments along the lines of "Did she forget to take her medication?" and the more ironic "What about public safety?!?". Passengers who witnessed the pole dance generally seemed amused when interviewed afterward by reporters. Although no one was harmed in the incident, local media has been busy wringing its collective hands over concerns such as "what kind of subway culture is desirable" and the current state of some women's "sophistication".

A spokeswoman for the Kunming Railway Group Propaganda Department, surnamed Tang, was perhaps predictably grumpy and scolding when asked about the pole dances:

People in public places should comply with rules governing order and not affect others. The metro is one of these public spaces, and because pole dancing in the subway disrupts traffic order, it should not be encouraged. I hope the majority of passengers, mostly out of security considerations, will not imitate these actions.

Odd or seemingly out-of-character behavior is fairly common news fodder in and around Kunming — including here on this site — often because such stories generate discussions regarding public behavior. Several years ago, a male-only nude swimming club near Yuxi sparked a debate on public morality, while a 2011 incident where a man drove his car up and over a pedestrian bridge stirred up concerns over selfishness and common courtesy.

perhaps Auntie had had a couple of baijius beforehand.. but good on her for giving people a laugh!

Growing up in New York. Our MTA (Metro transit) system always had these fools in the trains. I don't want to see this or graffiti or entertainers or beggars annoying us. I just want to get from point A to B without these eyesores.

More of this type of thing.