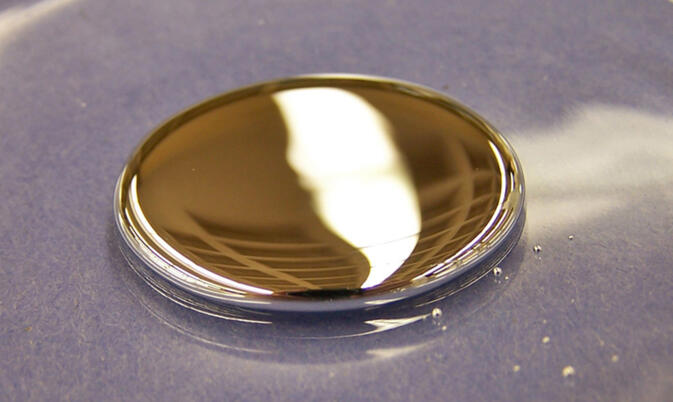 The good news continues for a five year-old boy from Kunming who many thought would not live through the year. Known in the Chinese press by the pseudonym Qiqi (奇奇), the child became famous in January when doctors discovered enormous pockets of liquid mercury inside his body.

Released from the hospital this summer after extensive treatment, Qiqi is said to be doing well and attending school. Now, police believe a specially formed task force has captured the man responsible for the poisoning. Few particulars regarding the arrest have been released other than that the suspect is male and was taken into custody in Kunming on September 22. A police spokesman explained the lack of information thusly:

Public security authorities are involved in an ongoing investigation of the case. Because the inquiry involves a victim who is a minor, in accordance with the relevant provisions of the law, we cannot release very many details at this time.

Qiqi's odyssey from mystery illness to recovery began late last year when he experienced a litany of ailments including severe weight loss, prolonged bouts of fever and fatigue, and boils on his lower back and buttocks. Local doctors reportedly misdiagnosed the symptoms as a common virus and sent the boy home. 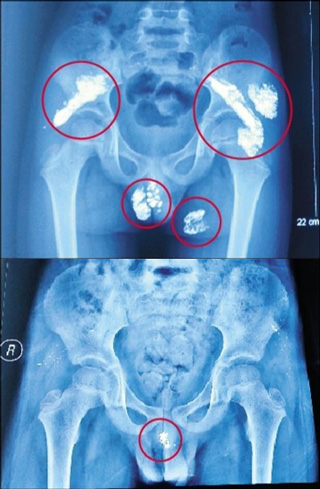 X-rays of mercury deposits taken before and after surgeries

The symptoms persisted and worsened. While Qiqi's father and grandfather were examining the boy in February, they pressed on one of the boils, causing mercury to well from Qiqi's skin. The family rushed Qiqi to First Affiliated Hospital of Kunming where tests revealed concentrations of mercury in his blood were 200 times expected levels, while his urine contained a reported 10,000 times more mercury than that of a healthy child.

A series of X-rays confirmed that Qiqi had several centimeter-long clusters of the heavy metal in various places around his abdomen. Unable to design a course of treatment, doctors in Kunming transferred Qiqi first to Guangzhou and then Shenzhen. Still seeking treatment, Qiqi was finally checked into a Beijing military hospital. There, a multi-disciplinary team of doctors carried out exploratory operations and successfully removed what they estimated to be 99 percent of the mercury lodged in the boy's body.

Upon completing a second surgery in May, the lead doctor told reporters although mild mercury poisoning is not uncommon, Qiqi's is believed to be the most severe pediatric case ever confronted by medical science. The surgeon also intimated there was no conceivable way for such concentrations of mercury to occur in a child outside of someone directly injecting the substance.

Back in Kunming, detectives began to collect evidence, originally operating under the assumption that classmates of Qiqi may have fed him mercury during school lunches. That theory was quickly dismissed and the investigation instead focused on family friends and others who were in daily contact with the boy, culminating in this week's arrest.

As for Qiqi, he continues to attend first-grade elementary school classes and has gained back much of the weight he lost while ill. Doctors say they will monitor his health for the foreseeable future, fearful that his heart, liver, kidneys and intestines may have suffered irreparable damage from the poisoning.

Where is Magneto when you need him!