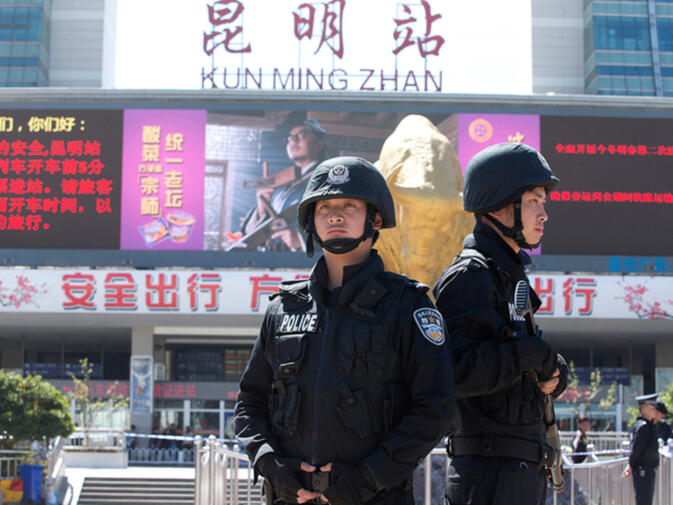 The Intermediate Court of Kunming has found four defendants guilty of carrying out a deadly knife attack that claimed the lives of 31 civilians and injured 141 in March of this year. Three of the defendants, all men, received the death penalty, while the lone female suspect was sentenced to life in prison.

The one-day trail, held on September 12, lasted only a few hours. Video shows the three men, Iskandar Ehet, Turgun Tohtunyaz and Hasayn Muhammad seated in court with shaved heads, wearing matching blue prison uniforms. They were all found guilty of "premeditated murder and leading and organizing a terrorist group". The fourth defendant, Patigul Tohti, will spend the rest of her life behind bars after being found guilty of "intentional homicide and joining a terrorist group".

None of the men on trial participated directly in the train station attack, according to a BBC report. Instead, they coordinated the assault from afar — making plans beforehand and then directing five of their associates. Court documents made public following the trial say the three men were all captured by police two days before the attacks occurred.

This narrative directly contradicts previous official accounts claiming the suspects were apprehended March 4 following a 36-hour manhunt in Kunming and beyond. It remains unclear when or where the men were actually captured, as no details of their arrests have ever been made public. Conversely, the story surrounding female assailant Tohti has remained consistent since March.

She was arrested following a bloody rampage wherein she and four others indiscriminately stabbed dozens of people who were queueing to buy tickets at the Kunming Train Station. Tohti was eventually subdued by police and arrested, while her four co-conspirators were all reportedly shot dead in a span of 15 seconds by a SWAT team sniper.

The trial in Kunming was uncharacteristically open to the public, and 300 people, including victims and their families, attended the proceedings. Security at the courthouse was increased noticeably, with armed guards posted both inside and outside the courtroom.

China has significantly ramped up law enforcement and 'anti-terror' efforts following the bloodshed in Kunming. In many cities around the country, police officers are now permitted to carry sidearms for the first time in decades. Trials involving suspected militants have also increased, and hundreds of people have been jailed for terrorism-related crimes by Xinjiang police as violence escalated over the summer.

1. Would be nice to get a straight story.
2. Why is it necessary to kill people who break laws? Does this deter further attacks by people into suicide anyway? If not, how is it that vengeance = justice?

Why should killers be fed,clothed, given healthcare for life at the taxpayer's expense.

So that we don't become killers too.

So the men are to be executed not for the murders themselves, but for "making plans beforehand and then directing five of their associates". How much planning is needed to wander into a station and start attacking people with knives? It's all a bit odd.

pre meditated suicide? these people knew what would happen. there is no real way to punish people. death is not the worst punishment for crimes as horrific as these.

@Liumingke: I can think of ways you might disagree with me, but I don't understand what you mean by using the word 'naive'.