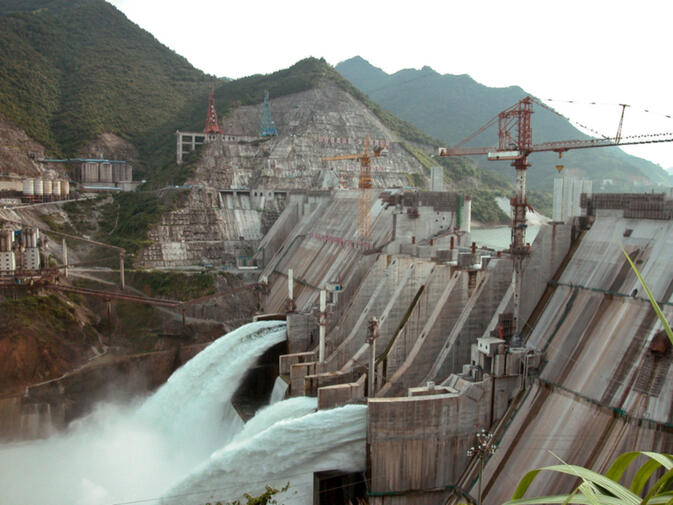 A huge hydroelectric facility in southern Yunnan is causing tension between China and several of its downstream Southeast Asian neighbors. The Jinghong dam (景洪大坝), which stretches across the Mekong River, is currently discharging water in an effort to lower reservoir levels, raising the specter of flash flooding further south along the riverway.

On September 1, the Chinese government informed flood control authorities in Cambodia, Laos and Thailand that the dam would begin to release large amounts of excess water. The facility partially opened its floodgates September 5, releasing 535 cubic meters of water per second. Such activity is expected to continue through the end of the month.

Although this amount of water has yet to cause flooding in Laos or Thailand, both countries have issued public warnings as a precaution. Officials in both countries fear any further increase in outflow from the dam — which has the capacity to release up to 9,000 cubic meters of water per second — could have disastrous consequences. An unnamed official in Laos told website RFA river levels in the city of Houayxay — 200 kilometers south of the Jinghong dam — had risen noticeably but had so far not approached flood levels.

Thailand, which makes up more than 800 kilometers of the country's northern border, is currently in the grips of its annual flood season. At least 28 provinces in the country's north are already experiencing widespread inundations. Because of this, Thai flood control authorities are particularly wary of any increased flow along the river. Channel News Asia is reporting "the situation at the Chao Phraya dam, the main water gateway between the mountainous north and the central plains [of Thailand], are at a critical level".

Further downstream in Cambodia and Vietnam, officials appear less concerned. No flood warnings related to the Jinghong dam water release have yet been issued in either country. However, a spokesman for Cambodian water conservancy group 3S Rivers Protection Network told reporters, "We know when an upstream dam opening its gates to release reservoir water combines with the heavy rains of wet season, it's a high threat."

The 1,750-megawatt hydropower plant, located roughly five kilometers north of the city of Jinghong, first went into operation 2008 following more than five years of construction. Power generated at the facility is used in Yunnan but is also often sent to energy-hungry Guangzhou or exported to Thailand.

Exemplified by the current situation in Jinghong, cross-border management of the Mekong — called the Lancang River (澜沧江) while flowing through China — is often a contentious issue. Mekong countries have, in the past, expressed frustration over how the river is handled inside China. Such concerns largely revolve around the wellbeing of the 48 million people who rely directly on the waterway for their food and livelihoods in Southeast Asia.

In the past the attitude of Chinese representatives within the Greater Mekong organization was pretty much that China could do whatever it wanted on rivers within its own territory - just another example of how nationalist 'rights' are not sufficient for handling a globalized world.