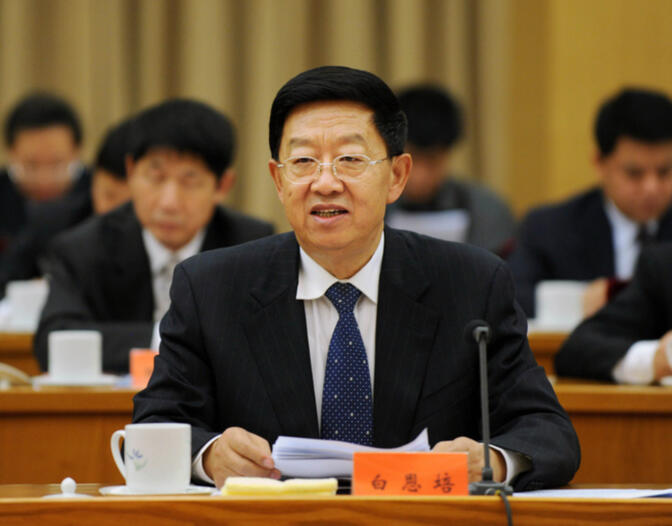 The dominoes continue to tumble as China's corruption purge shows no sign of slowing. The newest scandal involves a career official who held Yunnan's highest political office for more than a decade. Bai Enpei (白恩培), provincial Party Secretary from 2001 to 2011, is under investigation and "suspected of serious discipline and law violations", Xinhua is reporting.

Most recently, Bai was deputy head of the Environmental Protection and Resources Conservation Committee, an arm of China's National People's Congress. He assumed the post in August 2011 following his time in Yunnan. His tenure has now most likely come to an end, as Chinese authorities rarely, if ever, announce an investigation without overwhelming proof of guilt.

Investigation into the 68 year-old Bai's activities will be carried out by the ever-so-busy Central Commission for Discipline Inspection in Beijing. No other details regarding the inquiry have been made public, although internet speculation is rampant and includes accusations of misconduct involving Bai's wife and several current or former politicians.

Bai's troubles began when he was implicated in the trial of mining tycoon Liu Han earlier this year. Liu, head of Sichuan Hanlong, was eventually sentenced to death along with his brother for murder, gunrunning and controlling an organized crime ring. Bai and China's top security czar, Zhou Yongkang (周永康), were both said by prosecutors to have ties to Liu during the latter's trial.

During his time in Yunnan, Bai was perhaps most widely known for his unflagging support for damming the Nu River. Educated as an engineer, Bai pushed for hydropower projects along Asia's longest undammed waterway as a means to economic development. Championing hydropower over other industries, he once rather indelicately told reporters, "You cannot expect the people of the Nu River to keep wearing animal skins and bring in everyone to have a look in the name of ecotourism."

Although all provinces have been touched by president Xi Jinping's crackdown on corruption, Yunnan has been especially hard hit. Wen Qingliang (闻清良), former head of the Kunming Railway Bureau, narrowly escaped the death penalty just two weeks ago following his conviction for accepting bribes. Before that, vice governor Chen Peiping (沈培平) was also found guilty of graft and former Kunming Party Secretary Kong Chuizhu (孔垂柱) reportedly committed suicide while in custody and under investigation.

What do you do when almost everyone is guilty?

Get Noah to build an Ark for the ensuing flood that will wipe out everyone.

I'm not disagreeing, but ALL is a lot.

I also think it's important to look at this in terms of cause & effect - the 'culture right now', like all cultures, has reasons for being - what are they?

re corrupt YUNNAN officials
Now there's a hole with no bottom - but let's hope the changes are sustainable. Looks like Beijing is paying more attention to Yunnan these days.

The lack of small business growth in Yunnan/China is mainly caused by such Government officials indirect/unofficial control of ALL the resources.

Hooray, get rid of these petty emperors and let the people get educated in law, questioning business practices and policies.