Rescuers close in on railway workers trapped for 70 hours 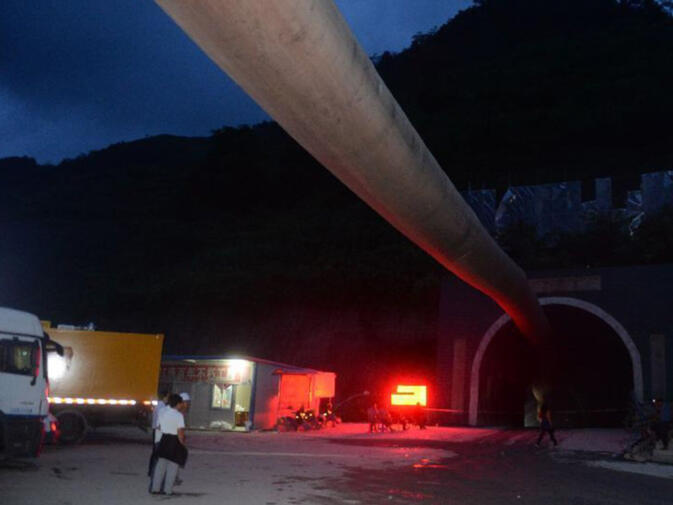 Fifteen railway workers have been trapped in a collapsed tunnel for three days in eastern Yunnan's Funing County (富宁县). As of this writing, they are expected to see daylight within hours, China Central Television is reporting.

Emergency workers are attempting to dig an escape passage for the workmen, who remain stranded but unharmed behind 26 meters of fallen rubble and steel. As of 9am, July 17, the passage was only four meters short of completion.

"Spirits seem high and from what we can hear, their condition is pretty good," Li Zhanguo (李站国), a site overseer, told reporters.

In addition to several ventilation ducts, relief workers have installed a pipe to send the workmen water, milk, and nutrition supplements. As the hours wore on and the workmen appeared to tire and weaken, rescuers began to send more nourishing food, such as roasted meats.

The construction workers have been trapped since the afternoon of July 14, when the right wall of the tunnel caved in, sealing them in a side chamber four kilometers from the tunnel entrance with no means of escape.

Rescue workers immediately began excavating channels to ventilate the chamber, using basic equipment during the first 20 hours as they waited for larger 620-millimeter bit drilling rigs to arrive from Kunming.

Coordinators first considered the effort a "life-or-death rescue", uncertain if the workmen would survive in the closed chamber. Celebrations broke out at the twenty-seventh hour, when a pipeline was successfully installed to deliver water, supplies, and communications.

Attempts to tunnel a passage through the rubble have been slowed by sections littered with collapsed steel supports. Concerned that in the last few meters the steel will prove impassable, workers have been developing three separate escape passages, with one slow-going underground tunnel moving forward at three meters every ten hours.

Although 14 of the workmen are out of immediate danger, reports state that one worker is still missing, feared trapped elsewhere in the chamber under heavy debris.

The accident occurred in Funing Number 1 Tunnel, a segment of a 710-kilometer railway line linking Kunming with Nanning, under construction since 2009 and slated to open in 2016. No statement has been given on future development of the tunnel or the exact cause of the cave-in.

Fourteen of the workers were rescued Saturday after five days trapped in the tunnel. They were transported to a nearby hospital for treatment. One person remains unaccounted for: