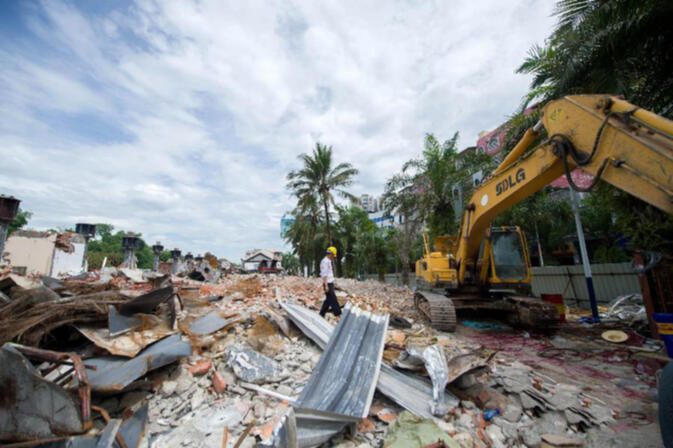 The media in Yunnan, and around the country, is often overly fond of splashy headlines containing enormous investment figures. The articles that follow are generally paeans to a modernizing society and the wonders of Chinese-style capitalism. Failure is rarely chronicled. That is far from the case in Hekou (河口), which is currently receiving plenty of negative journalistic buzz due to a development project provincial officials have deemed an embarrassing and costly "boondoggle".

At issue is a 270 million yuan (US$43 million) construction project on the banks of the Honghe River (红河). The China-Asean International Tourist Cultural Scenic Corridor had been under construction since 2011, when the government approved development on the site, a kilometer-long stretch of uninhabited land.

Designed to be a showpiece of the city's economic growth, the enterprise has become an object of public scorn and a symbol of miserable urban planning. The entire riverside development is now slated to be torn down at a cost surpassing that of its construction. Conservatively estimated at 300 million yuan (US$48 million), demolition costs include the projected expenses of paying back investors and cleaning up the site.

Although the corridor was nearly finished, its 150 mixed-use shopping and business venues are currently being razed and will eventually be converted into public green space. The decision to halt and ultimately destroy the venture is a "policy adjustment" by the local government, according to a South China Morning Post (SCMP) report. 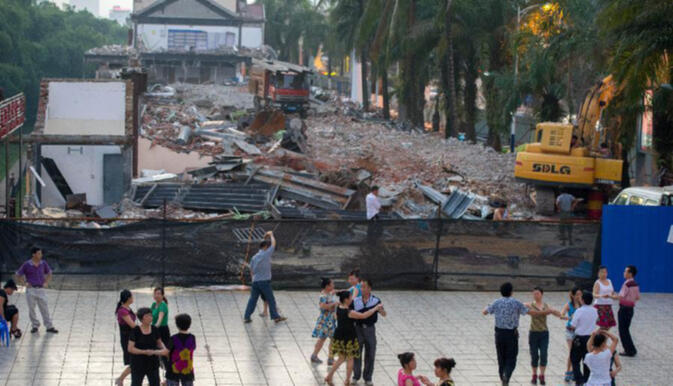 Concerns over poor planning and improper waste disposal were raised by local residents as the project neared completion. Complaints increased and the endeavor, which was hoped to complement and augment natural scenery, became a blight that authorities describe as a "negative influence" on the riverside.

Investors, shop owners and even low-level government planners were apparently surprised when the announcement came to dismantle the corridor. "It never occurred to us that a new order [for demolition] would come so soon," an unnamed city planner told the SCMP. Locals have taken things more in stride, using a still-standing plaza for ballroom dancing in the evenings.

Hekou sits on the shore of the Honghe River and is joined with the Vietnamese city of Lào Cai by bridge. For most of the past decade, provincial developers have been throwing money at the area in hopes of turning the city into a major trade depot connecting China, Vietnam and other Southeast Asian countries.

In 2008, a highway connecting Hekou County to major cities in neighboring countries was completed and work is well underway on a railway project linking Kunming to Hekou and, eventually, Hanoi. For now, however, it appears the 80,000 residents of Hekou will have to wait to see a venue that properly expresses their town's importance as a regional trade hub.

I'm amazed they are willing to tear down those nice stores for a river park. Sure, the stores pipes went right over the river, but that's not uncommon in China. Will have to agree, colossal waste of funds.

Oh wait, now I understand...I was like no way they do this kind of stuff for the environment in China. The original investors are going to cash out as part of the demolition; now that's more like China.

Yeah - follow the money, and see who's got expensive new cars.

Sadly, all that money now lines the pocket of someone but the people lose.

It'll be great foe the economy, tourism, and demonstrate to the world ancient Chinese ship building skills as well as support China's claims of sovereignty over any rock exposed at low tide.

Not sure GDP will increase if the sucker sinks.

July 26, 2021 "My apartment in Harmonious Century nearby North bus terminal is fully decorated with carpet, nice kitchen,western bathrooms. lots of bookshelves with …"
Living in Kunming sezuwupom