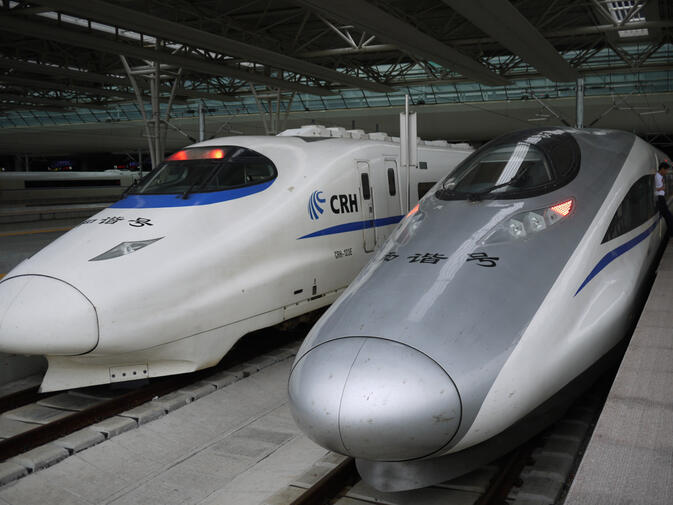 China is no stranger to immense feats of engineering and has shown itself capable of throwing up hydroelectric dams, subway systems and skyscrapers in times that make other countries jealous. Now one prominent engineer has announced that the country wants to build several high-speed railway lines connecting the Middle Kingdom to Europe and North America.

Wang Mengshu (王梦恕), a designer at the Chinese Academy of Engineering told the Beijing Times that continent-spanning tracks radiating out from China were in the "discussions" phase. Perhaps the most audacious and unrealistic of the railway lines mentioned by the engineer was one that, if built, would connect China to the United States. Wang maintained that while political hurdles remain, Russia "has already been thinking about this for many years".

The proposed route would travel north from China via Siberia before passing through a 200-kilometer long underwater tunnel in the Bering Sea. It would then head south through Alaska and Canada before connecting to an unspecified city in the United States. Trains would theoretically travel more than 13,000 kilometers at speeds of over 200 kilometers per hour, making the trip in roughly two days.

Wang also outlined ideas for two tracks crossing Central Asia with final destinations in Berlin and London, respectively. In a write-up of the story, reporters for English newspaper The Guardian were quick to point out that "no [other] railway experts" have come forward to endorse any of the projects.

Beijing Times reporters who filed the original report were also somewhat skeptical. They pointed out that China could not possibly afford the "astronomical" price of such projects by itself. Technical issues would also be a concern. Foremost among those would be construction of the undersea tunnel joining Asia and North America. Perhaps less challenging, but nonetheless daunting, would be the engineering feats necessary to build tracks that would pass through diverse climates and geological areas.

Eye-popping railway projects are not particularly uncommon in China. Five years ago, China's then-Minister of Railways Liu Zhiju articulated a scheme that would link coastal Fujian province with Taiwan. Although officials maintain the technology to build such a rail line exists, no concrete moves or funding efforts have been announced publicly.

Closer to reality is the Kunming-Singapore regional rail network. Negotiations between China and several of its Southeast Asian neighbors have been ongoing for seven years. The concept, which was once given a completion date of 2015, has stalled due to lack of funding and may be further put on hold due to territorial water disputes (requires proxy) now playing themselves out between China and Vietnam.

One region where China is poised to lay prodigious amount of track is East Africa. Premier Li Keqiang recently signed an agreement with Kenyan president Uhuru Kenyatta, finalizing plans for a 23.7 billion yuan (US$3.8 billion) railway from Mombasa to Nairobi. It is expected to be finished and ready for freight and passenger traffic in 2018.

Not sure people would want to take a high speed train for 2 days as they are the worst of both worlds. Too fast to see the scenery out the window, too slow (and with too many things to go wrong) to get to your destination quickly.

Don't get me wrong, they are fine for a few hour trips on common routes and better than planes for short-medium routes (e.g. HK-Shanghai/Guangzhou etc), but for longer distances planes win every time. Or if you have the time, slow comfortable trains with decent windows are much better than planes.

It's not practical. The way the world is, terrorist would take advantage and sabotage the tracks to make their statement. I wouldn't want to be trap somewhere you can't get out of.

As with most big projects, among the biggest challenges will be the politics. This has already been seen in the China-Singapore project.

I used to work on govt projects in the UK and it is always the politics that proves one of the biggest hurdles, mostly before building even starts.

In a country where the government does not have to worry about the political fall out from such projects, it is easier to build what you want, largely where you want. As soon as other stakeholders get involved (especially if they have the power of veto, e.g. other countries, states or provinces) it gets bogged down very quickly.

@ Blobbles,
I agree, the train to the US would not be that great. A journey for enthusiasts perhaps.

Look at Chinese travelers today, who takes the 2-3 day journeys now? Those without the means to pay for another choice. I do not see it being a feasible link for business travelers.

Rail links to the US would be useful for freight trains, but they will not be doing 300kph in the foreseeable future.

No country will be very happy to allow an increasingly militaristic China to build tracks that could one day roll an entire regiment to their doorstep. Not going to happen.

Interesting to see the projects that people come up with while they avoid the obvious priorities.

I have been very interested.in.the same thing. Long distance railways even to americas from here. It seems like logistics will be a serious problem Though. My guess is that the same as the alaskan pipeline nightmare, the costs associated with building across that particular landscape will be a serious hurdle. Itd be cool if an underwater train could be built. I dont think our oceans can take much more though and the bering sea fishing industry might oppose a big noisy thingbeing plunked down into a fairly stable environment. Once agaIn the last thing we think of is the earth. Lastly... if it only goes 200kph...What! Forget it. I think we will come up with a better plan before this one comes to fruition.

Researchers at Southwest Jiaotong University in China are developing (as of 2010) a vactrain to reach speeds of 1,000 km/h (620 mph). They say the technology can be put into operation in 10 years.

These trains have been in use for many years in the DUMB found in the US.

Aren't we going to need a high speed boat, not train? 4ft to 12ft sea level rise on it's way. Alas, an underwater train stopping in a submerged Shanghai station could be awesome .