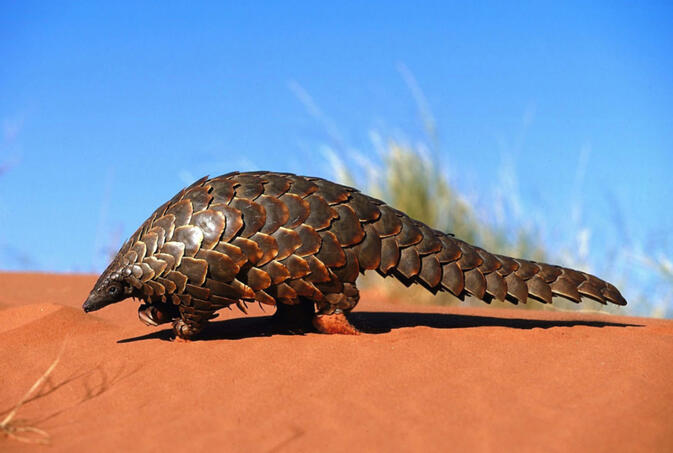 Pangolins are no longer on the menu in China

In an attempt to limit or even eliminate the illegal trade in endangered animals, the Chinese government has announced harsh new punishments for traffickers, hunters and consumers. Those caught eating rare wildlife face the strictest penalties — up to ten years in prison — according to a China Daily report.

The changes to the country's criminal code were handed down from the the Standing Committee of the National People's Congress, China's top lawmaking body, on April 24. People apprehended for knowingly buying poached animals face up to three years in prison. The discrepancy in punishment for those eating and those buying rare creatures is apparently intentional, as lawmakers seek to stamp out demand first. Ostensibly, a decline in market demand would then force illegal hunters to look elsewhere for profits.

Four hundred and twenty creatures currently comprise China's list of rare animals. Perhaps the most well known of these are giant pandas, Asian black bears, golden monkeys and pangolins. Many of the creatures on the Chinese list are classified as endangered species — their populations threatened by habitat loss, pollution and poaching.

Demand for rare animal parts was once fueled largely by their use in Traditional Chinese Medicine (TCM). Recently, as China's middle and upper classes have seen explosive economic growth, buying and consuming endangered animal parts became a way for the newly affluent to display wealth and prestige. Such trends have, at times, successfully been countered by aggressive public service campaigns featuring celebrities. This is especially true in the case of a national, non-profit anti-shark fin effort spearheaded by former NBA star Yao Ming.

The new laws somewhat curiously do not address the issue of wild animals killed for non-food purposes. Beijing very publicly destroyed three tons of ivory after conducting a national campaign against the trade in elephant tusks. However, few people purchase ivory for TCM purposes anymore, and today ivory is largely bought by wealthy Chinese in the form of jewelry and carved statues.

The new prohibitions against eating endangered species may have their largest effects in southern China, especially in the provinces of Guangdong, Guangxi and Yunnan, where an estimated 70 percent of the smuggling in black market animals in China takes place. Not coincidentally, all three provinces are in close proximity to, or share borders with, Southeast Asian countries labeled by the United Nations as hotspots for the international trafficking of wild animals.

Is there a list available of animals the government sees as endangered or forbidden? Not that I'd ever eat anything like those, but I want to know how far their list reaches in regards to foreign animals and if Yao Ming's efforts paid off. Thanks!

In all honesty what do you think the police are going to do with it? I doubt they're going to send it to a nature reserve or something.

The police are too busy doing whatever they do. They don't even keep the crosswalks safe for little kids and the elderly from public buses.... yet they're going to take care of a pangolin? hah...

I told my wife to call the police because I remember reading this article. She called the police and a few minutes later, a woman from the Rare animal protection Bureau called my wife. The police arrived and took the critter away before my neighbor got his grubby hands on it.

The woman from the Protection Bureau called again and told my wife that they would pick up the little critter the next morning from the police station.

Apparantly, someone from the police station called the protection Bureau. I was surprised my wife got the call and also surprised that she told us what she was going to do.

Good job Hugo. It's not a waste of time. I've seen on the news many times where animal like monkeys, raccoon, eagles, exotic birds wind up in residential areas and the people from the zoo are called. This is done so that they can take care of it. If it's sick or wounded they will take care of it and put it in a proper enviroment.

Agreed. Just saved that pangolin from being turned into Chinese traditional medicine.

Is this the same one you saw? Or is did a truckload of the critters overturn somewhere in Kunming?

For Hugo - thats respectful and great deed (civil courage) of you.

Chinese people ususally dont make too much stir with their neighbors, even if they chopped humans, or cooked heroin, next door. Since you crossed that line, be prepared to have some anger in your neighborhood (at least from the pangolin owner and friends). Hopefully theres a majority of reasonable people around there. Anyway, it was a great deed.

I have no idea where this little fellow came from. He came from under some bushes near the entrance to our apartment. Maybe someone was keeping him in a garage and he got away or he was released from fear of getting caught.

My wife just translated this article for me. This is our little critter as it mentions our residential quarter. Glad to see he has a few more days of life in the wilderness before someone else recaptures him.