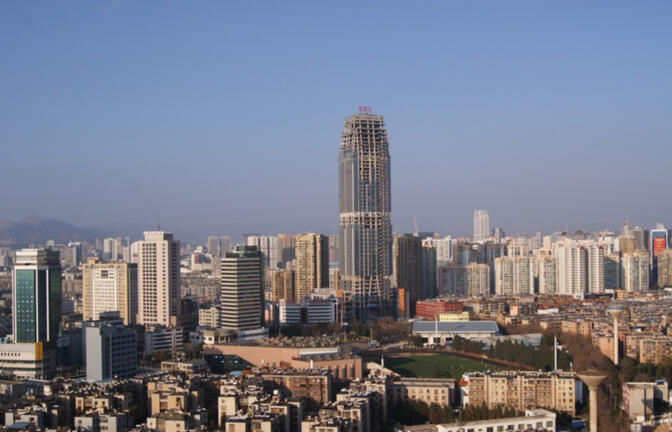 Weather for most of the past month in Kunming has been characterized by cloudless skies, warm temperatures and extremely dry air. Although such conditions are typical during the province's annual dry season, this year in particular, the Spring City appears to be experiencing elevated levels of smog and haze. National meteorological reports tend to bear this out as Kunming's air quality ranking fell precipitously in March and continues to do so in April.

The city's average air quality index (AQI) for the month of March was 72.77, according to Ministry of Environmental Protection statistics. The grade falls into the category labeled 'moderate health risk' and places Kunming's air just above that of Xiamen (厦门) and just below Shantou (汕头) — both of which have comparable populations to Kunming. Only one month earlier in February, Yunnan's capital ranked fifth best nationally in terms of AQI.

Air quality statistics are compiled by calculating the prevalence of several pollutants in the air of a given city. In China, AQI totals measure levels of carbon monoxide, nitrogen dioxide, sulfur dioxide and ozone. Statistics also incorporate the presence of ultra-fine pollutants smaller in diameter than 2.5 micrometers. Commonly referred to as PM2.5, these particles are generated both naturally and by human activity. Elevated levels in the atmosphere are often associated with the burning of fossil fuels, especially in vehicles and coal-fired power plants. The presence of high levels of PM2.5 has been linked to elevated cancer levels and acute respiratory disease in humans.

Several factors have contributed to the short-term uptick in Kunming air pollution levels, including weather conditions, pollution and wildfires. Chief among these, according to local meteorologists, are concrete and other construction-related dust particles. Liu Chuan (刘川), Director of Monitoring at the Kunming Environmental Protection Agency (KEPA), told the Yunnan Daily construction dust particles larger than PM2.5 are believed to make up 60 percent of the particulate matter currently in Kunming's air.

Liu went on to say that winter and spring — which encompass the dry season — are generally much worse than summer and autumn in terms of airborne pollution. During the rainy season, humidity tends to weigh dust down enough that much of it is not blown up into the atmosphere, Liu explained. Currently, Kunming is experiencing daily average humidity levels resembling those found in deserts, meaning winds can more easily bear dust particles aloft.

No matter the season, air pollution is exacerbated by the estimated 1.7 million vehicles cruising Kunming streets. The city's infatuation with cars peaked in 2010 when more than 1,000 new vehicles were registered daily. That number has dropped somewhat, but more than 160,000 cars are still being added to already choked streets annually. Pollution levels, especially in the south and western sections of the city have been especially hazy recently. The smog in those areas was largely caused by a raging forest fire between Kunming and Anning. In total, the blaze claimed more than one square kilometer of alpine woodland, sending up huge plumes of smoke for four days.

Liu of KEPA says he expects Kunming air pollution to return to more normal levels once monsoon rains arrive in a few months. Until then, it appears a humorous hand-written sign in downtown Kunming may be the best expression of how to cope with the ceaseless dust. The couplet, located outside of a quilting shop and sounding much better in Chinese, reads: "Spring City people are so happy, every day they eat 200 grams of dirt" (春城人民真幸福, 每天都吃二两土).

Could you clarify if the director is female or male? Last year it was "he"

Felt like a city in the middle of a desert for sure lately!

The air quality this last month was not just bad in the big city, Kunming. I traveled throughout Southwest Yunnan, from Xishuangbanna to Pu'er to Lincang in April and the sky was just as drab and gray there. The dryness and the burning that goes on in the countryside around harvest of sugarcane and other winter cash crops really combine to make the air visibly as bad as Beijing.

Well, I went whole April desperately to search for any beach or hill (in Northern Southeast Asia) where the Sky would be Blue and the Air Fresh. There was none around. The same minor key grey sky was absolutely everywhere.

So, yea, this is mainly bcs all the slash & burning farming going on before rainy season. Add some traffic there too and it gets even more gray.

In conclusion, that grey sky is everywhere in March/April. Anyone who gets dsperate for Clear Blue Sky will get pretty desperate (I can say) if he/she tries to search for it in any direction going South from Kunming.

The only solution is (probably) heading Northwest - beyong The Valley of The Blue Moon. Somewhere where the wolves still howl in the moonlight.

Yes it's very frustrating to find a place where u can recharge your batteries... Chenggong has blue skies most of the time and isn't far.