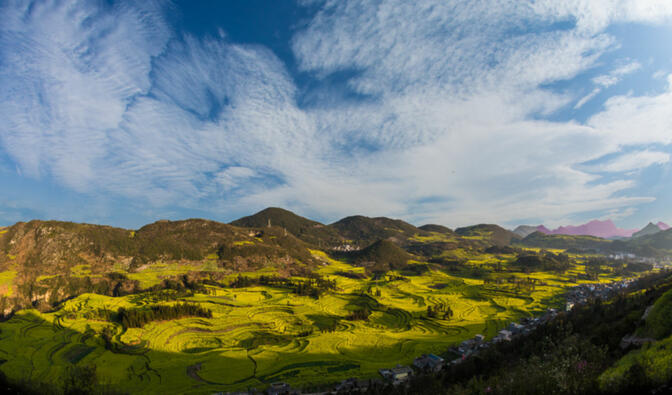 Editor's note: Two GoKunming contributors recently made separate trips to Luoping (罗平), which at this time of year boasts one of China's most stunning landscapes. Although Peter Micic and Adam Crase visited the area's sprawling rapeseed vistas only ten days apart, their experiences were vastly different. Unless otherwise mentioned, all images are courtesy of Crase's Kung Fu Imaging. 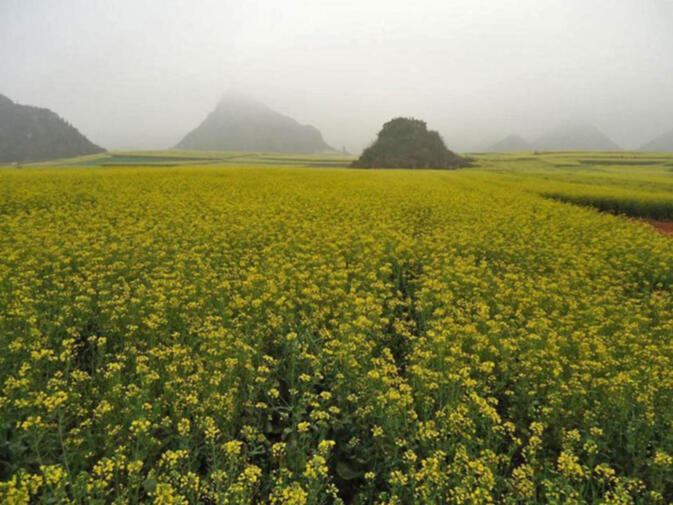 Of rapeseed and snow

Taking a train from Kunming to Luoping would be just the thing considering that it was the time of year to view oceans of rapeseed fields set amidst Karst terrain — a landscape that tells tales of plate tectonics, geological wonders and chemical processes.

We were traveling with three European photographers, one of them on his first trip to China. Our mission was simple enough: to capture stunning vistas at sunrise and sunset. But the morning we arrived at Luoping, the mercury had dropped to almost zero. No blue skies, no puffy white clouds, just rain, hailstones and snow. Pretty foul weather for a group of shutterbugs. 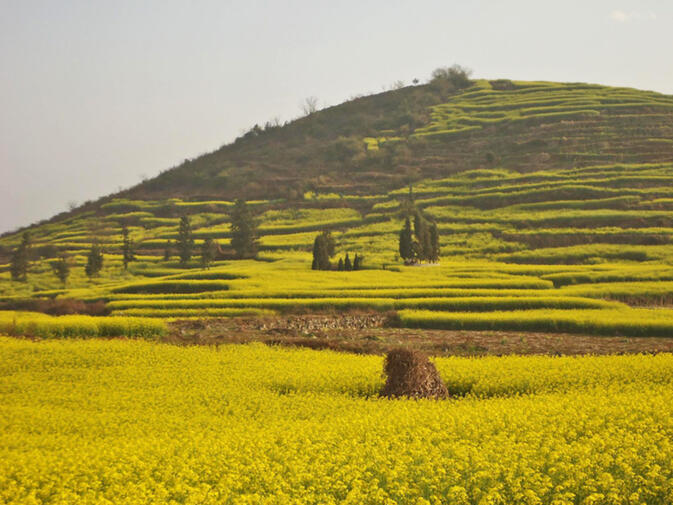 The only time on our brief trip that the sun came out was en route to our first destination, Nine Dragons Waterfall (九龙瀑), one of the most prominent attractions on the local tourist circuit. We didn't believe our driver when she told us that while the sun was shining at Nine Dragons, Golden Rooster Peak (金鸡岭) was shrouded in fog and it was raining elsewhere. When we finally stopped at Golden Rooster Peak around 5pm, the paparazzi were in full swing, hoping that the gods would part the skies and deliver a breathtaking sunset.

The next morning we drove to the Duoyi River (多依河), about 35 kilometers southeast of Luoping. We passed a Buyi minority village on the way to the Duoyi River Scenic Area (多依河风景区) and decided to turn back and take a closer look. Lazhe Village (腊者村) is situated atop a hill and reachable by a narrow chain bridge across a river. A young man standing near the bridge, sporting a blue raincoat and black rubber boots, informed us that a film crew from Henan province was shooting a historical drama at some undisclosed location in the village. 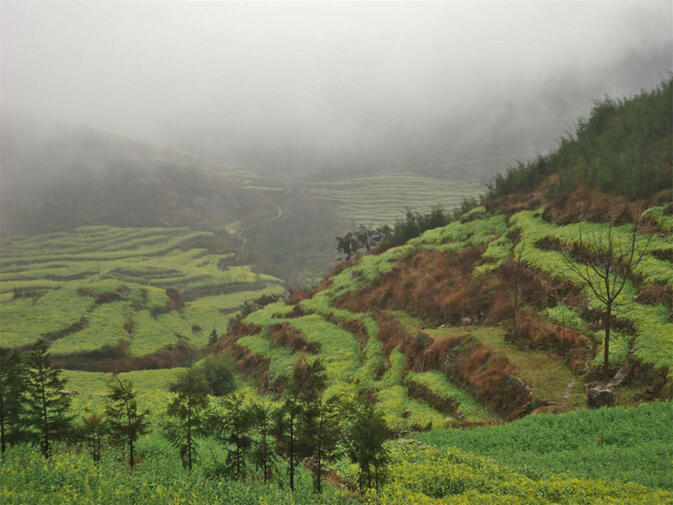 The film crew was apparently shooting a costume drama set in the declining years of China's late imperial period. Not the kind of thing you'd expect to encounter when visiting a village in Luoping on a cold, rainy day. But as we climbed a staircase of stone steps passing houses made of rocks, earth, wood and bamboo, we were determined to find out where they were filming.

After circling a cluster of houses we came to a turn, started to descend and bumped into several men carrying styrofoam lunch boxes, who we guessed were part of the film crew. We finally came to the set location — the courtyard of a two-story wooden house on stilts. We greeted some of the crew but had no intention to gate crash a movie set or meet the actors. We wanted more than anything else to escape the cold, and in a Buyi home just a few minutes from the set, we huddled around a fire, toasting our hands and eventually staying for a sumptuous lunch washed down with beer.

It had darkened into a misty evening by the time we arrived back at Luoping Railway Station. It started to snow. We boarded our train back to Kunming, spending most of the three-and-a-half hour trip in the warmer buffet car. The weather on our trip was completely unexpected, but it was these unpredictable elements of nature and the capricious landscape that allowed all kinds of marvels to unfold. 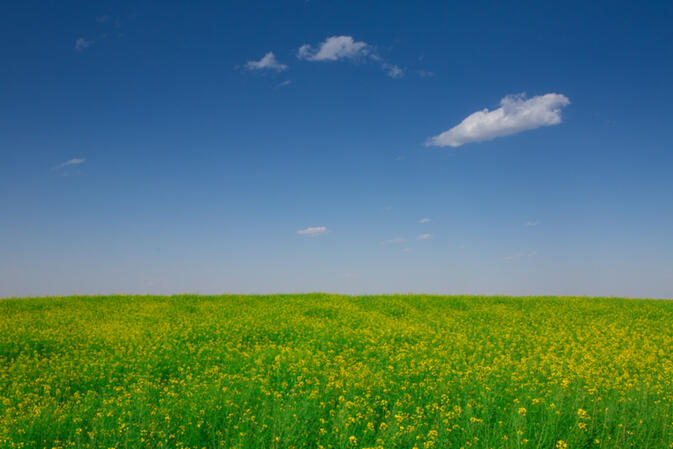 The wonders of Luoping, a snapshot

By Adam Crase, who spent almost a week exploring the enchanting landscapes of Luoping. 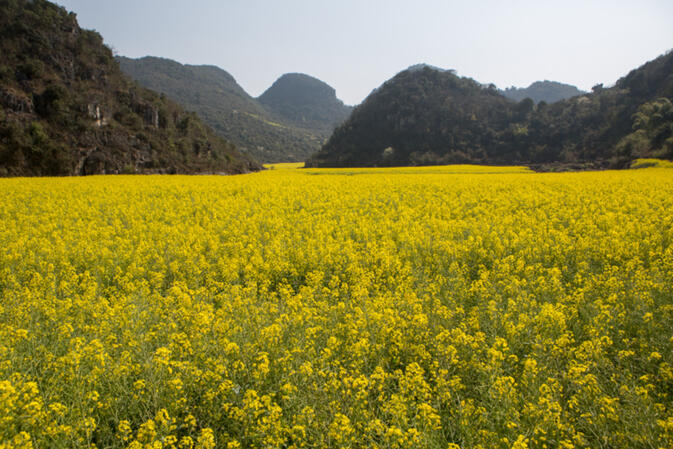 The fields of Luoping are planted almost entirely with rapeseed — also known as canola — and bloom annually in stunning profusion from the end of winter until early summer. Although the growing season for rapeseed varies from country to country, in Yunnan it is typically harvested in June, making spring an ideal time for photographers to visit the fields. 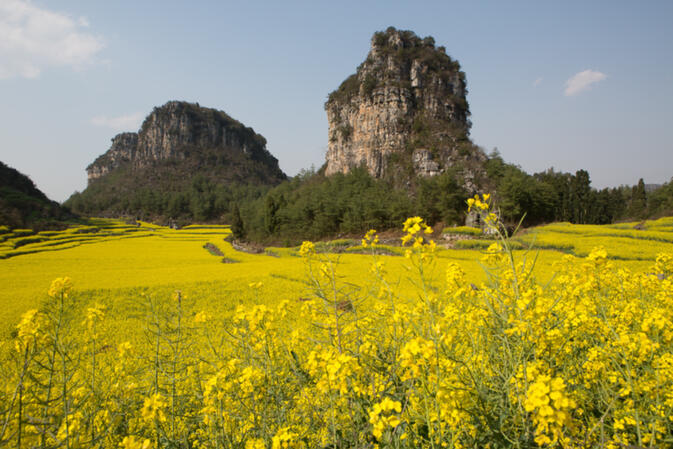 Although rapeseed is planted over gigantic swathes of Canada and India, perhaps nowhere else in the world do meadows of the flowering plants compliment the landscape as well as they do in Luoping. 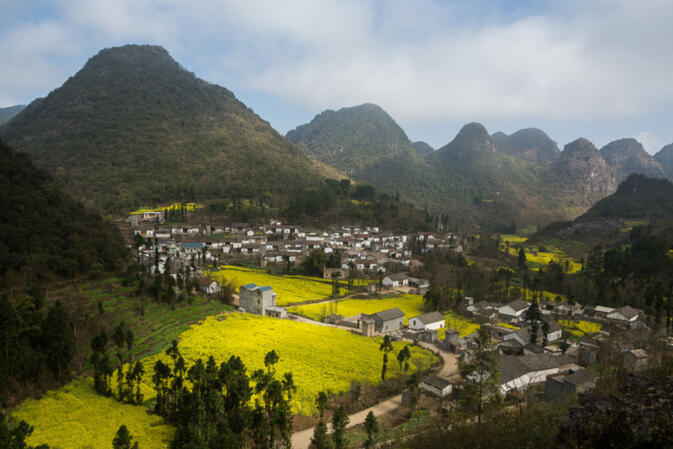 Set amidst conically shaped and tree-covered Karst outcroppings, from some vantage points the fields appear intimate and small. Villages dot the region, their whitewashed houses a striking contrast to seas of yellow. 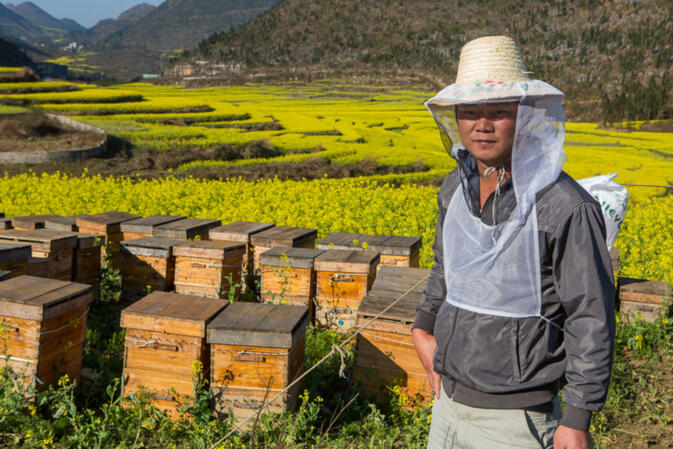 Although rapeseed is grown mostly to produce cooking oil and livestock feed, the sheer number of flowers make beekeeping an obvious profession. Luoping honey is an amber gold and exhibits a deep, rich flavor unlike any other Yunnan version. During the spring months, it is available for purchase virtually everywhere in the valley. When we were there in early March, the weather in Luoping was extremely variable. At times mist covered the hills, only to be burned off by a bright and blazing midday sun. 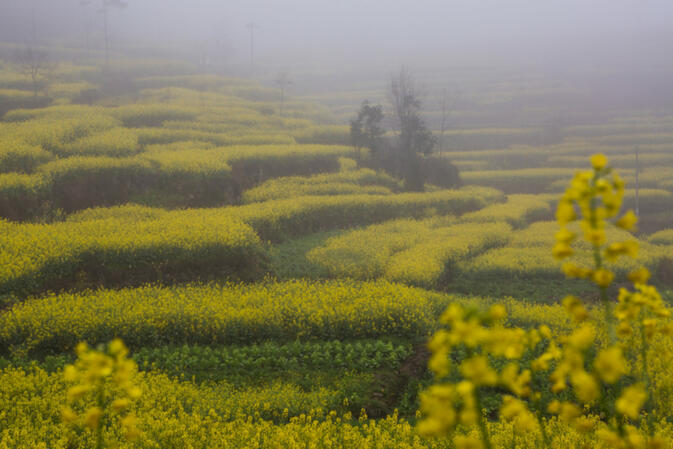 Most people hope they can see the rapeseed meadows of Luoping under perfect blue skies. Fog and clouds may not be ideal backdrops for photographers, but such conditions can draw different moods out of the landscape.

Perhaps the most photographed vista in Luoping, and one that can become extremely crowded as people jostle for a good shot. This area is called the 'Snail Fields' (螺丝田) for obvious reasons. 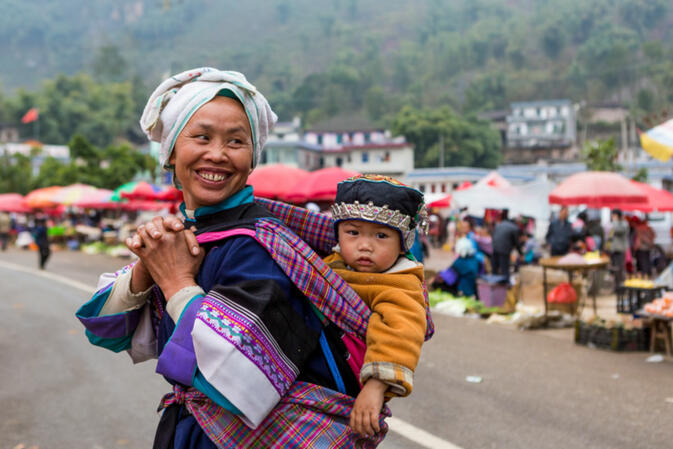 A Buyi woman and her baby taking in the sites at a Luoping market. Although the vast majority of Buyi live in Guizhou, they make up a significant amount of the population in Luoping and other parts of eastern Yunnan. For anyone venturing to Luoping, there are standard spots where almost all tourists stop. But by following paths up into the hills you can easily leave the crowds behind and find quiet scenes. Getting up early can afford visitors amazing views. From atop a nearby hill the area known as 'Hundred Thousand Hills' (十万大山) stretches away to a seemingly endless horizon. Contoured fields trace the curves of the hills, making intricate patterns that resemble the concentric seats of flowery amphitheaters. Two of the lovely people we met while touring Luoping. The gentleman is a spry 98 years-old. His wife, who happily welcomed us into the couple's home, is 82.

GoKunming contributor Adam Crase is an American photographer based in Guangdong province. He travels extensively in China in search of unseen angles and perfect shots. Adam recently published his first book — a large format collection entitled "Dongguan, China 中国东莞". He is currently working on a revised second edition and putting together shots for another book focused entirely on Yunnan. More of Crase's images can be seen at his website Kung Fu Imaging and he can also be found on Facebook (requires proxy).

Are the flowers all finished in the Luoping area for this season? Would it be too late to go in the next week or two?

I'm pretty sure the flowers stick around for at least another month and the rapeseed is harvested in late May or early June.

Hope the flowers have another month in them, after reading this article I fancy a trip to the area myself now and the flowers definitely help make a big contribution to the scenery.

Will be bringing myself some honey back for sure to as love it :o)

Hey everyone!
Are the flowers still blossoming or is it already finished for this year?

Has anyone been to Luoping in the past few days? I may have missed it this year, but wondering if the canola flowers are still in bloom if I head that way this weekend.

Sorry you are to late. Was there last week and then the blossum had already nearly all gone.