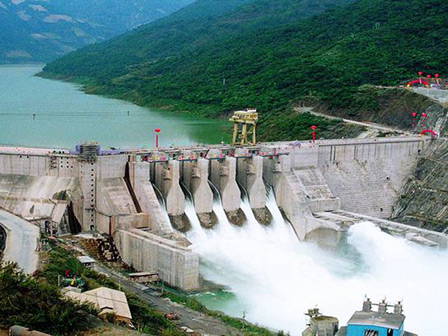 A decade of frenzied dam building in Yunnan is beginning to serve its intended purpose, at least in terms of electricity generation. The province has been aggressively pursuing a plan to position itself as a renewable energy provider not only internally but for other regions of China and now neighboring Southeast Asian countries.

An industry analysis recently released by Yunnan Power Grid Corporation (YPGC) reports that installed hydroelectric capacity in the province has for the first time surpassed 600 million kilowatt hours. That energy is being used primarily to meet soaring electricity use in Yunnan. which has been growing by 18 percent a year.

In addition, hydropower generated in Yunnan is being transmitted over high-capacity transmission lines to energy-hungry cities on China's east coast. The two largest importers of Yunnan energy are the megacities of Shanghai and Guangzhou. This year the amount of Yunnan electricity sent to Guangzhou has risen by nearly 33 percent when compared to the same nine-month period in 2012.

Increased production is the result of more and more dams going online but is also be due to environmental factors. A four-year drought that left much of the province parched contributed to low energy production. This year however, rainfall has returned to historically average levels, allowing for increased hydropower generation closer to installed capacity.

The term "installed capacity" refers to the maximum amount of energy a generator can produce in a certain amount of time — usually an hour. Therefore, if all of Yunnan's dams were operating at peak capacity under ideal conditions they would produce 600 million kilowatts of energy in 60 minutes. Perfect results such as these never occur and when excellent conditions for a specific facility in Yunnan do exist, the opportunity is sometimes squandered.

Despite the capacity to generate record amounts of salable energy — which would presumably lead to record profits — many of the province's power plants are idle much of the time. Arguments over electricity taxes between authorities in different provinces have led to some of Yunnan's largest dams being shut down for months at a time, in effect wasting billions of kilowatt hours.

To make up for such economic losses, YPGC has increasingly turned to neighboring Southeast Asian countries. Exports of electricity from Yunnan to Vietnam are up 62 percent from the same time last year. Laos, meanwhile has already purchased 122 percent more electricity from Yunnan than it did in 2012 and is considering how to upgrade transmission lines so it can buy even more.

And then there are the environmental issues.

when I first saw the small link photo I thought there was an AT-AT walking across the top of the dam. LOL. anyone else? no? ;)

brownie points for off topic but funny

Haha! Wouldn't that be cool?