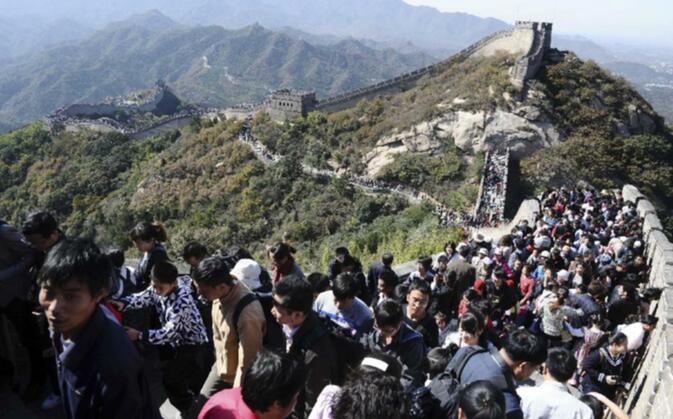 Major government-run news agencies, including Xinhua and China Daily, have published articles questioning whether Golden Week should continue as it is currently conducted. Both reports suggest the fourteen year-old holiday schedule should be seriously overhauled. The most common proposal is to replace the National Day vacation period with a paid leave system that would stagger tourism over the entire year.

The current structure of China's National Day holiday was instituted in 1999 as part of festivities held to commemorate the fiftieth anniversary of the founding of the People's Republic of China. As the country's economy has grown and disposable incomes have risen, the holiday has developed into something of a circus.

Tourist numbers during the week-long vacation have climbed every year since 1999. So too have the occurrence of stories describing travel meltdowns and accidents, absurdly overloaded travel spots and increased crime during Golden Week. Xinhua reporters went so far as to compare these problems to a medical syndrome in need of a cure.

The paid vacation arrangement would presumably spread holiday time for employees of the government and state-owned companies equally over 12 months instead of concentrating them all into a single week. Such an initiative may help to alleviate many of the current inconveniences and has apparently already been granted government approval. According to the China Daily report:

February [2013] saw the State Council, China's cabinet, announce a new program promoting domestic tourism. It says that a paid annual leave system will have been basically implemented by 2020, meaning all employers will be encouraged to subscribe to it by this point. 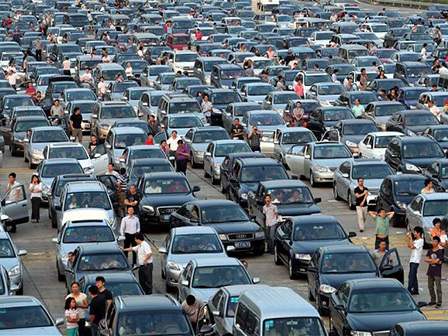 A massive Golden Week traffic jam outside of Shenzhen

Small travel changes were instituted by the government in the run-up to Golden Week this year, but nothing approaching a systematic restructuring of the holiday. It was the first time tourist destinations around the country were required to close their gates after reaching predetermined capacity numbers. Although this policy was strictly enforced in some places, Beijing's Forbidden City tried to accommodate double the amount of tourists it was authorized to — a reported 175,000 people in a single day.

Horror stories were not limited to China's capital and their prevalence has led to the aforementioned discussion of an alternate vacation system. An estimated 65 million people crammed onto trains during the holiday — a record for a single week — prompting the addition of more trains and tightening already hectic rail schedules.

When people did reach their destinations, many of them found enormous crowds already on hand. More than 10,000 tourists were stranded for hours in Sichuan's Jiuzhaigou National Park after the daily maximum of 40,000 people were allowed into the park in under an hour.

In Yunnan, when Golden Week traffic was at its peak, the normally two-and-a-half hour drive from Lijiang to Dali reportedly took ten hours. However, it was not always sheer numbers of people that ruined vacations, as tour operators in Zhongdian charged 380 yuan per person for "authentic Tibetan meals". Those unwilling to pay were left on the side of the road.

Of course they need to allow people to choose when to take holidays. I am surprised their goal is 2020 though, it should be 2015. Taking more than 2 years seems excessive.

Something I note is that a lot of infrastructure is being built to enable it to cope with the golden weeks. Huge train stations and roads that are only full when a golden week is on isn't exactly a wise use of resources.

A bus full of tourists threatened by a tour guide? And nobody beat him to a pulp? Cut his hands off, one knuckle at a time for threatening my family? Seems like a fair trade. They deserve what they got. Stranded by the operator two hours from the nearest city and they didn't beat the tour operator to a pulp? Deserve what they got. This would've been an excellent opportunity to see whether simulated drowning is really torture or just aggressive interrogation.

better go visit the great wall ASAP before they turn it into a McDonald's. i wonder how many girls were 'accidentally' groped.

China already has a "compulsory" paid leave system. The trouble is that there is the vast majority of companies don't give their staff they legal rights.

The government wants people to go on holidays in order for them to spend money, they even make highways free to encourage this! But the only thing they can do to make sure most staff actually get holidays is to make a few days public holidays (300% OT) in a row so staff actually get some days off work to go spending.

Really Yuantongsi??? I aren't doubting you, but looking here:

Which is a bit airy fairy, but at least it means that if you have worked in a place for a year you should be getting paid annual leave... how much of course is up for debate.

China will have to become a hell of a lot more efficient and productive per person to compete internationally. Until they do, I guess they will just keep screwing the workers to do more hours!

Ironic. We spent our golden week hiking through mountains on the very same Dali-to-Lijiang corridor that was so crowded, and saw but one soul for three days!

I've often thought they should stagger the vacations. I've mentioned it to Chinese friends, and they always reply 'oh that would never happen'. I'm glad to see that it might actually happen. It's needed.

@blobbles. they may be entitled but will they get it. the only way to monitor effectively is to have a work shutdown for a week that way the employer has to take ont he workforce on mass and not as individs bleating like sheep. lone voice in the wind. also easy for outsiders to monitor. only one thing to do is go look see if factory is closed.

Interesting how nicely the cars are lined up in that picture. Can you imagine the same scene here in Kunming.

Employers will be 'encouraged' to offer annual leave. Says it all. The capitalists bought the Communist Party. For a nice price to be fair. They won't give paid leave unless obliged to. So we're stuck with Zhu Rongji's idiotic Golden (ie ripoff) Weeks

Employers will be 'encouraged' to offer annual leave. Says it all. The capitalists bought the Communist Party. For a nice price to be fair. They won't give paid leave unless obliged to. So we're stuck with Zhu Rongji's idiotic Golden (ie ripoff) Weeks