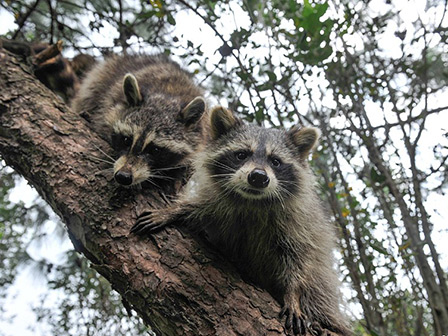 One of the most popular stories to come out of Mid-Autumn Festival is not about record-setting travel numbers or cultural festivals. Instead, the story receiving more ink in Yunnan — and being forwarded furiously on social media across China — concerns a missing, and possibly kidnapped, raccoon.

The animal was found to have disappeared on the morning of September 21 following heavy holiday attendance at the Yunnan Wild Animals Zoo (云南野生动物园). A worker conducting his daily headcount in the raccoon enclosure identified 47 of the animals, one short of the expected 48.

Two dozen zoo employees then searched the "Raccoon Family" (浣熊家) exhibit for burrows and damaged fences while also checking to see if the electrified fence surrounding the pen was functioning. All was found to be in good repair.

Ideas were proposed and debated regarding the circumstances surrounding the disappearance of the raccoon — known to zoo officials as Diandian (点点). Had she climbed a tree and then fallen outside the fence? Was she involved in a fight with other raccoons and forced to flee?

Zoo staff finally concluded it was possible one of the estimated 8,000 people who visited the raccoon attraction the previous day could have absconded with Diandian. The police were contacted and an investigation into the animal's disappearance is ongoing. The public is being encouraged to help locate the raccoon and a 10,000 yuan reward has been offered to anyone who can provide details of Diandian's whereabouts. 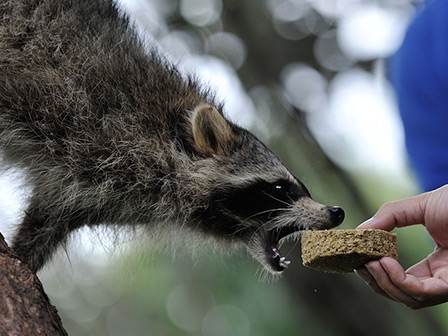 Only five days before Diandian's disappearance, the "Raccoon Family" exhibit opened at the zoo for the first time. It was touted by the Kunming press as being the first exhibition of its kind in China to offer the public "direct and intimate contact with a raccoon family."

Dozens, if not hundreds, of photos are now making their rounds on microblogs showing visitors to the park feeding the animals everything from whole watermelons to moon cakes. The exhibit's online popularity has led accounts of Diandian's possible kidnapping to go viral and the story, somewhat improbably, has become national news.

The Yunnan Wild Animals Zoo is no stranger to bizarre animal mismanagement. In 2006, the zoo opened a wildly popular 'tiger-fishing' attraction. Visitors were encouraged to buy raw meat and dangle it above hungry tigers from bamboo poles. Four years later, a pack of dogs inexplicably gained access to some zoo enclosures and went on a bloody rampage. Six rare sika deer were killed and an emu was mauled.

Kidnapped makes a good headline, but they are really smart and viscious critters and if she was forced to flee or wanted to flee, that's what happened. Also, forcing a raccoon to do something against its will...well just take a look at the picture eating a biscuit...and that's when it's friendly.

The others ate it.

It wouldn't be surprising if it tried to escape due to the inhumane conditions the animals live in at that place. The lions look underfed, get beaten with sticks and have no claws and teeth. I am pretty sure the teeth didn't fall out due to periodontitis.

I wouldn't be surprised if we saw a Chinese person walking around with a hat that looked strangely like a raccoon this coming winter! Raccoon soup?

Seriously, has any of the American's tried Raccoon soup (or know someone that has?). I am sure it has been done!

problem with raccoons in america is they have a high rate of rabies so most people stay clear of them. I knew people who use to hunt them with specially trained coon dogs. Was told they were good eating.

can somebody please call Ace Ventura?

Oh right, they have rabies??! I didn't know that... so if I travel to America for a hiking trip, should I get a rabies shot? Wait, are coons aggressive or scared of humans?

they can make good pets and are quite loyal though - my aunt had a pet raccoon for years that I think they found abandoned as a baby (NE US). It got seriously mad at her when she went away to college though.

but re: blobbles - I would keep my distance from wild ones just in case.

blobbles, i know raccoons can carry rabies, think high rate was something told to us as kids so we would stay clear of them. Just know that wild raccoons are not over friendly so if one approaches should probably leave alone or get away from it. Not sure if i have ever seen one in daytime. Very nocturnal.

True story- I ran into blobbles in the wilds of the Tian Shan last year. We spent a few days in the mountains together, and at that time he often pondered aloud how much he wanted to cook up some marmot soup, an animal which is also known to have a high incidence of rabies. He eventually left the hills unsated.

It makes me wonder what really did happen to those that raccoon...

Poor DianDian has probably already been skinned, cooked and eaten. :(

Well... I figured a coon in a zoo has probably been immunised against rabies... soooo... hang on a sec, just have to go feed Dian Dian...

Dian Dian is not a hat, soup, or stir fry. In China a raccoon looks like a cute exotic dog sized panda. She is probably dressed in bling and sitting in the back of an Audi.

Greater Toronto could export a high number to Chinese zoos.