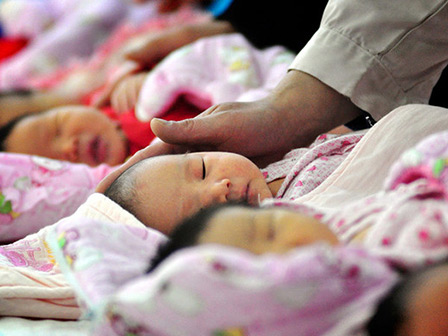 This past summer national news agency Xinhua published a list estimating the cost of rearing one child in ten of China's most populous cities. Yunnan's capital was not included but journalists working for Spring City Evening News (SCEN) took it upon themselves to calculate what such a budget might look like for parents living in Kunming.

The total bill, according to the report, comes in at just over 560,000 yuan for the first 18-21 years of a child's life. This number is five times lower than the one projected for raising a child in Beijing, which was estimated to cost in the neighborhood of 2.76 million yuan.

The Kunming tabulation seems to have left out some fairly serious expenses and tends instead to focus almost completely on education. High tuition levels are discussed several times in the report, but the 560,000 yuan figure represents costs for an "average" Kunming child. Other factors that were included in the tally of costs from "conception to college" include prenatal care and early childhood health considerations.

An expense incurred early on, and perhaps unique to China, is the purchase of milk powder. Many parents avoid domestically produced milk powder entirely after a 2008 melamine scandal. Instead, parents often rely on much more costly foreign brands. This expense alone can run to several thousand yuan per month in Kunming but are not without their own health scares.

Formal education for many children can begin before they turn three years old. Preschool fees vary depending on facilities and the quality of instruction and this carries over to kindergarten and primary schooling as well. The SCEN reporters found some private kindergartens in Kunming — specifically those with foreign-language instruction — had annual tuitions of close to 30,000 yuan.

Once a child has matriculated through elementary school in Kunming, education fees can, depending on school, increase sharply. Some private middle and high schools charge more than 50,000 yuan per semester and those prices continue to climb. GoKunming spoke with an administrator at a private Kunming high school who confirmed these numbers, saying 88,000 yuan per year was a fairly common figure.

Nearly half of the money SCEN reporters included in their total came with the assumption a child would attend college. A student attending Yunnan Normal University for three years can expect to pay 300,000. This projection takes into account tuition, books and housing fees but leaves out discretionary spending.

Spring City Evening News reporters somewhat strangely omitted allocations for such necessities as clothing and food. They also based their findings on the assumption that children would, at some point in their lives, receive some form of private education or tutoring.

Despite its obvious flaws, the SCEN report underlines the growing cost of living in Kunming. If expenses for raising a healthy and educated child in the Spring City are even half what they are estimated to be, many families, especially migrants from the countryside, are rapidly being priced out of an "average" life.

Nice calculation, but no babies mean no humans, no humans will live this earth except animals LOL!

How many more children do you think Kunming needs?

If only the children could wear little placards promoting civility....

88,000¥ a year for a Chinese high school, and people bitch and moan about the cost of Kunming International Academy. That price makes KIA seems very affordable.

Which high schools cost Y80,000 a year? Those for the elite, perhaps.

I hardly ever believe statistics like these. If you compare mean annual income a family with only one child (not two or three!) would have to be earning at the very leas 2 m. yuan to provide for the education of the child, meet a mortgage, and pay for other 'necessities' like an automobile. I tend to think stats like this are a matter of civic pride and reflect the lifestyles of Nuevo Riche, not the masses.