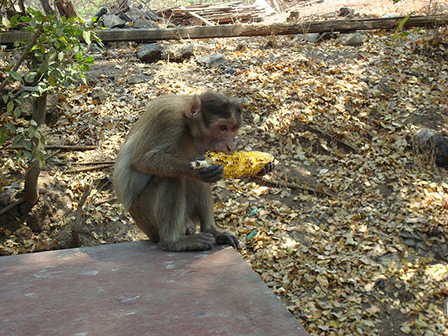 Elephants are on the rampage in Xishuangbanna and bears attacks on humans in Zhaotong are on the rise. Burrowing crayfish have infested the Hani rice terraces of Yuanyang and threaten the integrity of the region's earthen embankments.

It appears the animals of Yunnan are growing more restive by the day. Monkeys can now be added to that list, as farmers in Qujing (曲靖) in eastern Yunnan are increasingly reporting the destruction of their corn crops at the hands of marauding primates.

Villagers living close to Wanfengshan Nature Reserve (万峰山自然保护区) told reporters earlier in the week that for years groups of monkeys have routinely invaded their fields during the night to dine on nearly-ripe ears of corn. This year, primate raids on farmland in the region have become so prevalent they are threatening to wipe out the majority of the area's corn crop.

Several methods have been tried to keep an estimated 600 of the primates at bay, including placing scarecrows in the fields and organizing patrols to scare monkeys back into the forest. So far, nothing has worked and the problem appears to be growing. Now, not only are monkeys eating fresh corn still on the stalk, they have begun breaking into storehouses and plundering already-harvested grain.

Wanfengshan Nature Reserve was established in 2002 and people in surrounding villages have been dealing with monkeys since then. Ten years ago crop loss due to primate incursions were relatively mild and only considered a nuisance. But the problem has continued to grow with each season and now, for some farmers the situation has become grave.

Locals have come to the point where they have no idea what to do. They are forbidden by law to trap or kill monkeys and yet are desperate to raise enough grain to earn a living. Farmers claim the amount of corn lost to monkey raids last year alone totaled an astonishing 450,000 kilograms across more than a dozen villages. In the run-up to this year's harvest, many people have already applied for government compensation in lieu of lost crops.

Animal incursions onto cultivated land usually arise from one of three main factors. These include habitat loss, habituation to humans and overpopulation. Which of these factors, if any, are at play in Qujing, has yet to be determined.

Oh no. :( Does this mean they are going to start killing the monkeys?

So why is the monkey in the picture eating a roasted corn? Looks like he stole it from a BBQ vendor selling roasted corn.

ALTERNATIVES TO THE MONKEY DEATH PENALTY
Alternative ways to get rid of monkeys - somewhat benign - slingshots with small pellets/pebbles of rock salt...but one has to be consistent (and a reasonably good shot).

Trap and train the monkeys to do repetitive manual labor (such as typing) - precursor to planet of the apes...