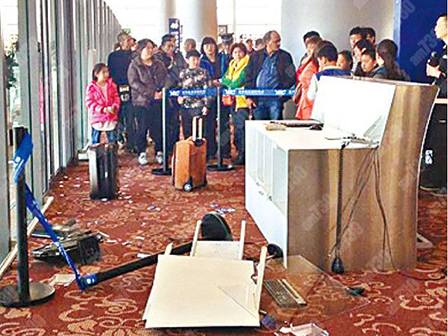 The man who infamously took out all his worldly frustrations on a Kunming airport kiosk has been sentenced to jail time. Yan Linkun (严林昆), formerly a county adviser in Qujing (曲靖), received a six-month prison sentence yesterday from magistrates in the Guandu District People's Court of Kunming.

Yan and his family's woes began on February 22 while they were trying to catch a flight from Kunming Changshui Airport en route to Guangzhou. The Yans missed their original flight and were required to buy tickets for one later in the day. They then retired to an airport restaurant to wait.

Upon arriving late a second time and again not being allowed to board, Yan apparently lost his mind. His ensuing tantrum was filmed by airport security cameras and later released online. It became one of many viral examples indicative of what many Chinese netizens have come to identify as a an emerging over-entitled ruling class.

The video shows Yan begin by pushing on closed gate doors while his female companion shouts and points at members of the airport staff. Ratcheting up the aggression a bit, Yan then destroys two computers before turning his attention to an advertisement sign, which he grabs and bangs against a set of glass doors.

Following his fit, Yan was immediately dismissed from his advisory position in Qujing and later relieved of his services as vice chairman at Yunnan Mining Corporation. He eventually also apologized personally to airport staff.

Despite his publicized remorse, on Wednesday Yan was convicted of intentional destruction of property. In addition to his six-month prison stay, which includes a suspended one-year sentence, Yan will have to pay for any and all damages he inflicted at the airport.

Below, one more time for your viewing pleasure, is the one-hit wonder that landed Yan in jail.

Did the crowd attack him for blowing his cool and acting like a jerk?

@Alien - you must be joking. Which country are you in?

"...stranded thousands of people and cuased near riot traveller reactions...."

I guess one mans "near riot" is another mans "scuffle"...

The problem with skimming an article is that you might miss that there are two incidents being discussed. The latter one causing a near riot has nothing to do with Mr Yan

At double speed, that recording is so entertaining to watch. Funny that there's no security officer to take him away. It's an airport after all.

And I don't think @Chingis was referring to any specific incident, rather the recent Salvadors thread where using the R word caused something of a scuffle.

This news makes me glad. Sometimes justice actually works as its supposed to.

I think the crime was getting caught, and so publically. Getting caught on camera and having it go viral is an embarrassment to gov. This is not good for social order.
There has also been a trend towards more unruly behaviour at airports, some of which have gone viral (like the Shandong woman in Guangzhou airport). This case in Kunming might be an exemplory/detterent sentencing.
Either way, it is a step in the right direction.

What I don't understand is why this guy wasn't immediately pinned down by officers at the first moment he smashed a computer. Instead, everyone including the police just watched, behind the safety of a line. I can guarantee you in virtually every other country on Earth, the second someone destroys even the smallest airport property, half a dozen police or security officers will come and make an arrest. I didn't see any evidence of an arrest even at the end of the video, more than 2 minutes after Yan smashed the first computer.

I used to be told that if you do even the smallest bad thing in China such as stealing a loaf of bread, you'll be immediately arrested and locked up almost indefinitely. It seems that those people who told me those things were quite wrong - it seems like you can do almost anything before you actually get arrested.

@Tom69
Yes, in China you get bounced if you look poor (kinda person who would steal bread). No if you look rich or start shouting, 'Do you know who I am?', or 'My father is Li Gang'.

Also the guys in uniform are probably not police officers but locally employed security people with no clear mandate to use force on passengers. No mandate = it's not my job. You won't get the can for not doing what is not your job. You can easily get canned for acting outside you job if someone is unhappy.

Airplanes are way over-used these days anyway - just one of a million things that the planet can't take anymore. Stay away from airports.

Thanks Dazzer, but irrespective of who you are, if you commit a crime you need to be held accountable. This guy could have said he is the most powerful person in China, that doesn't make it so, it's all hearsay. Most people wouldn't recognize him for anything other than his behavior. Of course, in this instance he was arrested, but I think it was disturbing that it took longer than the length of this video for that to happen - bystanders just watched him destroy thousands of dollars worth of property. Half the damage could have been avoided if he was pinned down more quickly. The thing is, people like this guy represent security threats. Of course, it's better this happened on the ground than in the air, because I can assure you that nobody would have let this guy have a tantrum up in the air - he would have been pinned down quite quickly.

I agree you should be held accountable. But people can get away with murder in many states around the world. Literally. It is not right, but that is the way it is. This time the man was held accountable. But unless there is public outcry, justice is often not done. One reason why tinternet will be a game changer in China.

Public outcries are not always allowed to be made public.

That last statement contradicts itself.