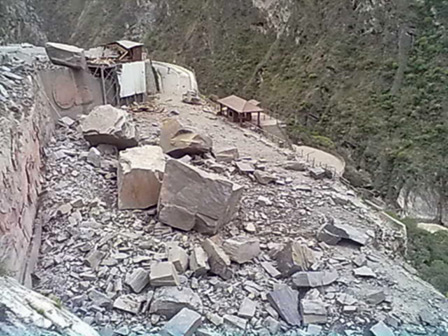 A landslide has destroyed a car park and blocked the road in one of Yunnan's most popular tourist destinations. The entrance to Tiger Leaping Gorge (虎跳峡) near Qiaotou (桥头) is now closed until debris is cleared and the road repaired, Xinhua is reporting.

Heavy rains last week during Dragon Boat Festival soaked the gorge and caused a section of the cliffs above the roadway to collapse. Although park staff were nearby when the landslide occurred, no one was reported injured. Several buildings were destroyed by falling rocks.

The road through the gorge is now closed to all traffic while the unpaved foot trail — known as the high path — remains open to hikers. Tourists are still allowed to enter through the Lijiang side and can hike to Tiger Leaping Stone. There, legend has it, a tiger once jumped across the abyss to avoid pursuers.

The gorge has been carved out by the Jinsha River (金沙江) — the main headwaters of the Yangtze River. The Jinsha flows between the imposing massifs Jade Dragon (玉龙雪山) and Haba (哈巴雪山) snow mountains. Tiger Leaping Gorge is prone to landslides but this most recent one was larger than usual. The report by Xinhua estimated that some of the boulders dislodged were 30 cubic meters in size.

During the summer months, Tiger Leaping Gorge averages 6,000 visitors a day. That level of traffic has been severely restricted since the road was closed. Numbers are expected to rebound once cleanup efforts are concluded sometime next week.

Editor's note: Special thanks to Keith Lyons of Lijiang Guides for informing GoKunming of this story.

Hiking among the clouds on Yunnan's Jiaozi Snow Mountain

30 cubic metres?? Should be gone by lunchtime. That's only 2 truck loads, suspect it is more. Dang, we are going this week, might be some disruption along the way.

This is the parking place of the Tiger Leaping Gorge. Looks like it happened at night because during the day this parking is full of cars and busses. The road is on the left of the picture and must be closed off as well. Clearing this will take some time because one cannot push the debris just over the edge because there is the Tiger Leaping Gorge itself. Might be nice to have a second big stone laying in the middle of the stream but that rock is bit too large to move in one piece.

As usual in reports in the local press the numbers are wrong. The big rock in the middle alone is 30 cubic meters (compared to the buildings in the back). The debris must be chopped up and even blasted to smaller pieces and then carted off. Pity that these horrible plaster murals on the hillside have not been destroyed.

My mistake, some of the boulders were themselves 30 cubic meters. Thanks to Dan for correcting my mistranslation. The article has been changed.