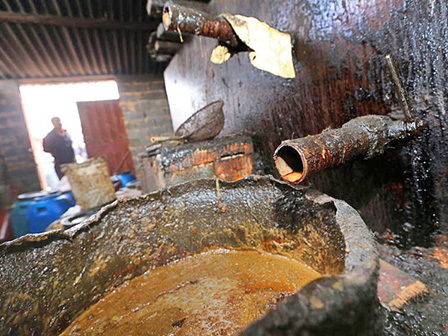 An ongoing Yunnan court case involving an edible oil company is growing more bizarre and disgusting as it enters its third week. What originally began as an investigation into using recycled food oil has transformed into a series of indictments over the production of thousands of tons of potentially harmful cooking oil.

Fourteen executives of Qujing-based Yunnan Fengrui Oil Company (云南丰瑞粮油有限公司) stand accused of knowingly manufacturing and distributing toxic food products. Over a ten-year period the company allegedly sold 32,000 tons of 'cooking oil' in Yunnan — much of it consisting of industrial and commercial waste, CCTV is reporting.

Investigators say they have uncovered Fengrui receipts documenting the purchase of discarded waste oil from industrial lubricant and lard processing facilities in Guangdong.

Other waste oil, originally destined for pig feedlots, was reportedly purchased in Jiangsu, Shandong and Sichuan provinces, as well as in Kunming's Guandu district. The materials were purportedly shipped to Qujing where they were combined with actual cooking oil in unregistered factories. 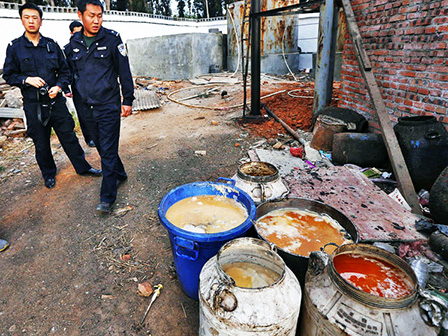 Oil produced in this manner was sold across Yunnan under the brand names Golden Cauliflower (金菜花) and Lucky Elephant (吉象). CCTV reporters estimate the amount of these products sold was enough to supply 1.5 million consumers with cooking oil for a year.

Lab tests of oil samples taken from the Qujing factories found high levels of the organic compound malondialdehyde. Although the compound occurs naturally in both sunflower and palm oils, elevated levels in the human body have been linked to diabetes, osteoporosis and is possibly carcinogenic. The Qujing oil samples contained levels two times higher than those allowed by Chinese food and drug laws.

Cooking oil recycled from waste is pejoratively referred to in Chinese as digouyou (地沟油), or gutter oil. The Qujing case is not the first time a large-scale operation of this sort has been uncovered in Yunnan. In 2011 a factory in Anning was closed down for making 50 tons of gutter oil from rotten animal entrails.

The problem of gutter oil is so rampant that the national security apparatus began a campaign in 2011 to stamp out the "four black pests" (打四黑除四害) — black workshops, black factories, black markets and black gambling dens. According to the CCTV report, Chinese police have investigated 1.3 million cases of gutter oil production in 250,000 illegal factories over the last 18 months.

Please PLEASE PLEASE!! bring back the death penalty for such crimes against society! Meanwhile - thanks and kudos to gokm for helping identify gutter oil brands - although this is no fool-proof guarantee of quality because of fake labeling in the illegal food chains (read the blog on fake foreign beers). These kinds of social dregs are like cockroaches - chop off the head - the body lives on for days (sing the goose song - chinese colloquialism for making the pre-vomit induction sounds) and uncover a few - the nest is rife upon discovery. Hopefully the government will seize ALL their financial and economic possessions and put them into dire poverty - I suggest 10 years minimum of re-educational hard labor shoveling toxic environmental sludge (such as the source of their ill-begotten gains).

I'm ECSTATIC the central government (and by trickle down, Yunnan) is focusing on food and health safety for society - benefits us all - and now we know what the police are really busy doing, as opposed to stomping out petty crime like pickpockets and other really annoying petty thefts, responding to idiotic traffic disputes, etc.

China's such a huge country with so many people and so many social issues in need of urgent repair (example energy, pollution, etc), but slowly and surely, the country continues to positively progress, despite social dregs such as the gutter oil offal and their ilk.

Don't eat out. You don't have a choice in what oil they are using for your meal. Especially those hole in the wall places. If you make your own meal, you can buy the brands that are not among those listed above. So disgusting! Yuk！No wonder newcomers get diarrhea.

I'm not a proponent of capital punishment but this is a case seriously testing my feelings. If you can earn yourself a bullet to the head for holding on to more than 20 grams of hard drugs, where is the equivalent for greedy, ruthless people who knowingly conspire to risk the health of hundreds of thousands of their customers? You know what, maybe chopping off a few heads could set an example for other sociopaths to behold.

Ever wonder how they can have cooking oil "on discount sale" at half the price of other brands??

Makes you wonder what all these restaurants are using.

The most depressing thing about Kunming is how amazing the place could be. Imagine being able to swim and fish in Dian Chi. Imagine being able to take boat trips through the city. One of the largest and most scenic freshwater lakes in China: destroyed. Almost 300 km2 of polluted waste water. And now we have a serious drought. It's shameful.

This amazing climate enables the province to grow some amazing fresh produce, from wild mushrooms to tropical fruit, but now people fear eating out because of what they may be ingesting, whether it be gutter oil, pesticides, hormones or fake meat!

The blue skies and the clean air always seemed like a counterbalance for these things, but now even these are degenerating rapidly.

Kunming will eat itself.

@ James,
This is sadly the result of unrestrained capitalism.

There is nothing new under the sun. A book was recommended to me, Upton Sinclaire's 'The Jungle' about the meat industry in Chicago in 1905. Not just tainted meat, but other fake foods, tainted milk (sound familiar), exploitation of factory workers (Fox... anyone?), crime, trafficking, drugs, etc.
The jungle was a protest book, and shares common flaws with other protest books, but the parallels with life in modern China are uncanny.

Add corruption, real estate fraud, and pollution to the list.

im not sure but i think i saw them. how can they bypass it. holy smokes

"If you look through the scientific literature, especially on India and China, they irrigate their crops with raw sewage effluent and untreated industrial effluent,"

Considering there is a drought in Yunnan, what chance is there that we are eating crops irrigated in the same way? Worrying.

Cancer !!!! aaaargh... Brain damage ! Oh God. It's not if, but when..... But are we all suffering from chicken coop risk assessment ? You can list about 6000 chemicals in a cabbage, all part of the living process. You can show that a lot of them are really dangerous, mostly from having names that frighten your brain. But seriously, we all know it is the will to make policing and prosecution a priority that will reduce random risk due to personal greed and indifference. BTW is it true that those pigs near Shanghai all drowned because their swimming trainer failed to buy them armbands ?

It's simple, China needs some more corruption cracking down. It's easy to see this occurring,just the same with the mafia in the USA. When there's opportunity and plenty of growth and wealth, well there you go. Though if you check they are all private companies, so perhaps the Chinese government should nationalise the oil industry. Left to private industry the world goes to the one eyed devil. Look at the horse meat scandal in so called civilised west, straight after the JImmy Saville Pedophile case (still not sure whether that scandal was released to take the heat of Pedo Saville). Anyway, more government control I say.