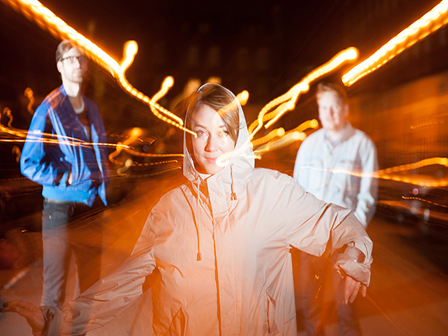 Drawing on a wide range of musical influences, electro-pop rockers Philco Fiction have a sound that is hard to pin down. Dubbed "Scandinavian Melancholy" by some, the band's music incorporates elements of rhythm and blues, disco, 80s and 90s pop, piano ballads and electronica.

The Oslo-based trio is fronted by singer/songwriter Turid Solberg, with Bjarne Gustaven and Andreas Knudsrød backing her with a vast array of instrumentation. They will play an 8pm show Friday, April 5 at TCG Nordica as part of their lightning tour of China. GoKunming got in touch with the band while they were traveling by train to their next gig.

GoKunming: You are doing ten shows in 11 days, 7,000 kilometers from home. How are you holding up?

Philco Fiction: We're doing more than great! We all agree this is Philco's most adventurous tour so far.

GK: Your Kunming show is the second to the last of your China tour. How has your experience in China been?

Philco Fiction: It's been everything and nothing like we expected! Let's put it like this: the bad thing about this tour is that we only get a tiny tiny taste of what the cities have to offer. We only stay a day in each place. This sure makes us want to come back. We're now on the train to Wuhan, five shows done, five more to come. Enjoying every minute.

GK: What's been the best venue you've played on this tour?

Philco Fiction: Oh, that's one difficult question. Each new city and venue has been surprisingly different so it's not easy to compare. But we won't easily forget our night in Hangzhou — playing pop at the Reggae Bar and then enjoying West Lake at midnight.

GK: How did you choose to come to China and how did you pick the cities?

Philco Fiction: For a while now, we've been hoping for a chance to tour China. So when the opportunity was there the choice was very easy. Abram Deyo booked the tour for us, and he is also traveling with us. There's a great chance we'd miss a train or five without him.

GK: Is the Chinese press following the tour? Have you been interviewed or have your shows been filmed?

Philco Fiction: We've been interviewed by Shanghai 24/7 and Scope Stories filmed our concert at Yuyintang in Shanghai.

GK: Do you get any time to yourselves at the end of the tour?

Philco Fiction: We actually had a couple of days in front of the tour, and we spent them in Kunming! A beautiful city. We got lost in the sun for hours. We enjoyed the Yunnan cuisine and the atmosphere. Mixian for breakfast and hotsprings in Anning!

GK: You've been known to play shows with backup dancers, are they with you on this tour?

Philco Fiction: Yes, we often collaborate with a choreographer and dancers in Norway. They couldn't come with us on this tour, but we we'll still make you wanna dance. We promise! We will actually release our new music video on the same day as our Kunming show. Dance, dance, dance!

GK: You've said you want to make audiences dance and cry simultaneously. How do you do it?

GK: Music reviews have made much of your influences, citing everyone from Michael Jackson and Prince to tons of music from the 1990s. Other than pop, what kind of music were you listening to?

Philco Fiction: We listen to a lot of different music. It depends on the seasons, the days, the cities.

GK: What can a Kunming audience expect from your show on April 5?

Philco Fiction: Old and new hits! We will play songs from both our albums — Give Us To The Lions and Take it Personal. There will also be a couple of brand new songs we are working on for our new album this year!

Philco Fiction and TCG Nordica have been kind enough to provide GoKunming with three tickets to Friday night's show. The first person to answer the question below will receive all three tickets:

What 1979 film was partially filmed in Finse, Norway?

Answers must be submitted through the GoKunming contact form and include your name, phone number and the proper answer. Good luck!

Image: Under the Radar

We have our winner! Congratulations to Sean for being the first to correctly identify Star Wars: The Empire Strikes Back as the movie filmed in Finse.

Great film and great music. I can't make the concert, but hope somebody will do a review of it?

Did anyone go? How was it?