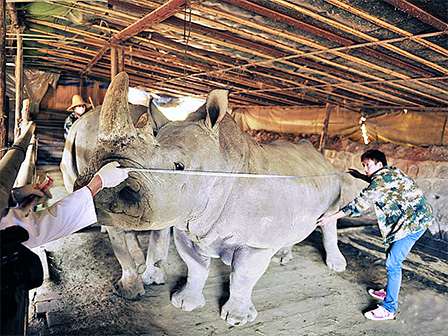 Pu'er Prefecture is in the process of reestablishing an animal population that disappeared from China more than 80 years ago. Seven southern white rhinoceros from Africa have arrived at a nature reserve in southern Yunnan and will soon be released into the wild.

The rhinos were purchased from the South African government in 2010. They were brought to Kunming after first arriving from Africa via ship in Guangzhou. Animal handlers kept the rhinos at the Yunnan Wild Animals Zoo (云南野生动物园) for nearly three years as they acclimated to their new surroundings and grew to adulthood.

This year on March 28, the rhinos were transported to their permanent home at Laiyanghe National Forest Park (菜阳河国家森林公园) in Pu'er. Zoologists hope the four female and three male rhinos will breed and eventually become the progenitors of a self-sustaining wild herd. Currently the animals are being held for observation before being released into the 207 square kilometer reserve.

Southern white rhinos are the least threatened of the world's five rhinoceros species, numbering more than 17,000 — mostly in South Africa. However, the northern white rhinoceros — a close cousin — could become extinct at any time, as only four individuals are known to live in the wild. It appears the rhinos brought to Yunnan are part of larger, international conservation efforts and were not purchased simply to become a tourist attraction.

Adult white rhinos can grow to almost two meters in height and males often weigh more than 3,000 kilograms. Despite their size, male rhinos require relatively small territories which average no more than three square kilometers. Females, especially those raising calves, need much larger areas in which to forage for food — sometimes up to 20 square kilometers per adult.

Transportation of the animals from Kunming to Pu'er was somewhat surprisingly accomplished without the use of tranquilizers. An animal handler surnamed Liu told China Daily he could keep the rhinos calm while in transit by tickling them, which they apparently enjoy.

What do you do when they stop laughing?

I wish them every success, but a lot more would be done for rhino conservation if the Chinese were discouraged from buying ivory.

I hear Prince William doesn't want to live in a world without rhinos. Yes: now.msn.com/[...]

Considering the price of rhino horn in China due to TCM superstition, sadly I think it's only a matter of time before one or more are poached.

How does this rhino horn work anyway?? Do you grind it up and take lines like coke? Then get harder than rockwilder?? ha

I tend to agree with Danmairen.
Poaching is perhaps inevitable.

Um, Ocean, ivory comes from elephants. But I think we all still know what you mean.

There is also whalebone ivory.

Someone needs to invent fake rhino horn! Everything is fake except your mother, right?

One has to wonder if the real motivation of reintroducing rhinos is because they are running out of horn and need the population to increase in order to get more horns... I bet some poachers are salivating at the picture!

Rhinos are also very big and take up a lot of space. China is already very crowded. I'm not sure this is a good idea at all...

My first reaction was that the importation and breeding of rhinos was going to be a big payoff for someone. Breed a few then, oops, a mature rhino dies. Quickly burn or burn the carcass sans the horn. Rhino horn goes for $60,000 USD per kgm or more.

"released into the wild" indeed. In this case the "wild" is the world's largest market for rhino horn and the reason so few rhinos are left.

I read a national geographic article on ivory of all kinds in a well stocked venue in Bangkok last night. Their conclusion was that there are serious, proven, viable alternatives to ivory for all purposes except medicinal. The finger was also pointed squarely at China.

Rhino horn is not ivory. Rhino is mostly keratin, like finger nails and hair. It is ground into a powder, then boiled in water for use in TCM. Many aliments are treated with rhino horn. It is not used as an aphrodisiac.

Quite. The local stuff would be better placed in the new and rapidly expanding category of Yunnandisiacs.

As the horn is actually compacted hair, removal of the horns with a fanfare of publicity BEFORE the beasts mooch off into the 'wild' would reduce the risk of poaching.