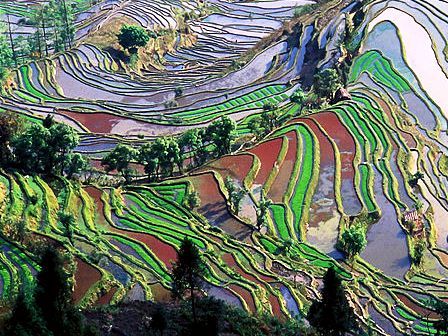 One of Yunnan's most iconic scenic areas, which is currently under consideration for UNESCO World Heritage status, is threatened by an invasive species. Burrowing freshwater crayfish introduced to the farms of Yuanyang (元阳) are endangering the structural integrity of the 1,300 year-old terraced rice paddies.

The crayfish are thought to have been introduced to the Yuanyang terraces in 2006. Xinhua reports that a just-returned migrant worker bred the animals in his rice paddy to make extra money and supplement his family's diet. Several other farmers in Bulong village (卜龙村) quickly followed suit.

Today the paddies are home to millions of crayfish that live in burrows up to a meter underground. The holes they are creating not only cause the paddy fields to lose a considerable amount of water, they also make the earthen walls that comprise the paddies unstable. Several small sections of the terraces have collapsed due to the burrows.

Officials in Yuanyang spent 1.1 million yuan (US$178,000) last year in attempts to eradicate the crayfish. The money was spent on pesticides as well as the introduction of predatory animals that eat crayfish, including carp, catfish and eels. Last year a reported 3.7 million crayfish were caught or killed by farmers but the problem persists.

This year the same amount of money has been allocated to fight the infestation, which covers farmland totaling 30,000 mu — or 2,000 hectares. An additional 28.7 million yuan (US$4.6 million) has been earmarked for ecological restoration, water management and terrace preservation.

The terraces in Yuanyang have been under cultivation for at least 13 centuries by the Hani people and have become a major tourist attraction. In 2012, nearly one million tourists visited the area, generating one billion yuan (US$161 million) in local revenue. The terraces are currently on a tentative UNESCO list and could receive World Heritage status when a committee votes this June. 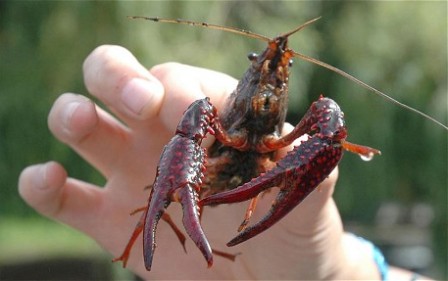 The cause of Yuanyang's woes

Does this mean we should avoid crayfish in the local markets, due to the risk of pesticide poisoning?

They should skip the pesticide...And throw a massive crayfish boil!! I love them little lobsters..

@tigertiger The local government has banned the sale of crayfish. Farmers are also required to destroy any of the animals they catch. Whether or not this has brought a complete end to their export, I don't know.