Videos: Clique and Gangnam Style by The Dangsters 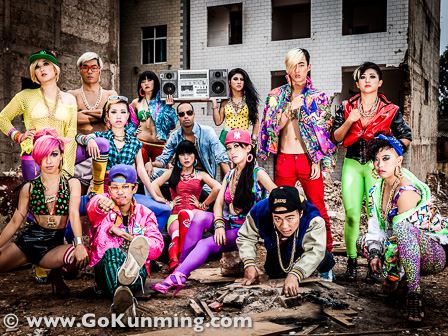 The Dangsters Dance Crew was originally formed in 2002 by Du Fei (杜斐) — aka Phoenix — and a few friends. From humble beginnings dancing largely for fun, the group now has studios at two locations where they instruct an army of 4,000 dance-crazy Kunming youth.

According to crew member Mimane, chief executive officer of The Dangsters, the group's goal is to promote their interpretation of street dance in Kunming and beyond. That take incorporates styles and influences from several different countries, cultures and traditions.

Apart from instruction, The Dangsters organize and choreograph both stage and street performances for their students, compete in national events and occasionally put on flash mob events such as the one shown in the second video below. Phoenix choreographs most of the routines but other members have begun to design dance numbers as well.

The first video was shot at the Southwest Forestry University (西南林业大学). GoKunming users with more delicate sensibilities may want to watch with the sound turned down.

The second video is The Dangsters' version of Gangnam Style. The performance was staged outdoors at Wangfujing in downtown Kunming and gathered quite a crowd. Mimane told GoKunming coordinating eighty dancers in a public space was a bit of a challenge. The video was filmed by INTONE Studios (英唐摄影).

The Dangsters have a busy spring in front of them. Together with French dance artists METAMORPHOZ, they will collaboratively present a show entitled Fengshui. A national tour of China is planned for this performance and includes a stop in Kunming on April 20 at the Kunming Theater.

Mr Patrick! Hi, I am sandy. Do you remeber me? No time no see. I miss you very much!

This dance crew is one that I learn dance from them. They are fabulous!

By the way, I joined this dance. I was in this video! hahaha

However, there were many people, and you may not find where i was! :)

Gangnam style with Kunming touches. Signing the busker's guitar was hilarious enough to have been in the original video. Nicely done.

By the way, I couldn't find you in there, Sandy. Too many great dancers.

Hey Sandy! Good to hear from you. Hope you are still enjoying high school.