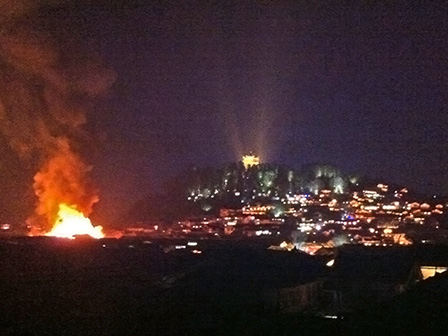 A fire that broke out in Lijiang on March 11 has destroyed a 600-square meter section of the old town. The blaze, which started at 8:30pm, required the efforts of multiple fire brigades and hundreds of passersby before it was brought under control.

Firefighters were hampered by low water pressure from municipal fire hydrants as well as the narrowness of the old town's lanes. In total 48 fireman and seven fire trucks arrived on the scene at Lijiang's Guangyi Jie (光义街).

Fire trucks were not able to move close enough to the burning buildings to provide assistance. Locals, pedestrians and tourists helped firefighters put out the fire by bailing water from the city's canals by hand.

The fire was brought under control roughly two hours after it began. Local news reports and a flood of Weibo posts indicate at least 13 businesses were damaged in the fire, which consumed both retail and residential spaces. An estimated 1,000 people helped fight the blaze and no injuries have been reported. 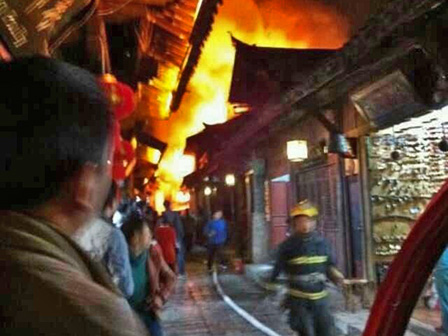 Lijiang Old Town was rebuilt after being leveled by a magnitude 7.0 earthquake in February 1996. The quake killed 322 people and left more than 300,000 homeless. Rebuilding efforts, funded by the Chinese government and the World Bank, resulted in Lijiang being awarded UNESCO World Heritage status in 1997.

The city has since become one of China's premier domestic tourist destinations. Its popularity with travelers is due to a combination of the town's scenic vistas and its traditional-style Naxi architecture — most of which is wooden.

The cause of Monday's fire has yet to be announced. In response, Lijiang party secretary Luo Jie (罗杰) convened an emergency task force to investigate both the fire's origin and also plan ways to prevent similar blazes in the future. 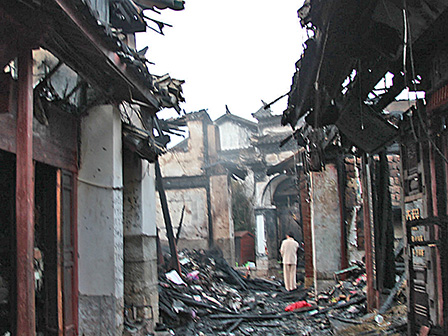 Wow, only 13 businesses lost and zero death toll. That's the best bad news possible out of a fire in old town. It could of easily been 130 businesses and worst. The might of the Chinese populace. 1000 for the bucket brigade.

Sounds like a job well done containing it but I do wonder why the fire marshal and the relevant authorities haven't addressed the narrow streets issue previously. There are plenty different types of light/narrow fire engines specifically built for allowing access to such places, and the cost compared to losing Lijiang's old town in the worst case scenario (and the loss of tourist revenue) is negligible. Sadly, in China it is tradition that things have to get really, really bad before they get better.

That was one day after I'd left. Anyway, Danmairen, I'm not sure if there really are fire engines that fit inside the old town of Lijiang. I even have trouble getting around without bumping my head. I'm in fact impressed the fire was contained with relative little damage.

They might have seen it coming though, there was some fire accident between Lijiang and Shangri-La during the time of my visit, which shrouded the entire Jade Dragon Snow Mountain in smoke.

After all those videos in the past few years of Chinese people being totally nonchalant about the suffering of their countrymen(remember the one where like 3 cars ran over a little girl and 30 people walked by before anyone helped).. this is really nice to read. I hope this gets out to the rest of china....Its better that they help each other :)

It's been a few years since I've last been in Lijiang, but it's a beautiful place and it's a shame that they lost that much to the fire :(

I have seen the tiny fire pumps/engines in Lijiang, I have no idea how many there are, probably only two (just in case). There is a dedicated firehouse at one of the gates to the old city. The mini engines are like the mini road sweepers on Haigeng Daba. About 1.5 m wide. The are basically just a pump on wheels, they carry no water, and I assume pump from the streams that follow the streets.

I imagine if there are many people there, navigating the streets would be difficult. And a wheeled vehicle could not take the routes that have steps.

As Alex said, it could have been much worse.