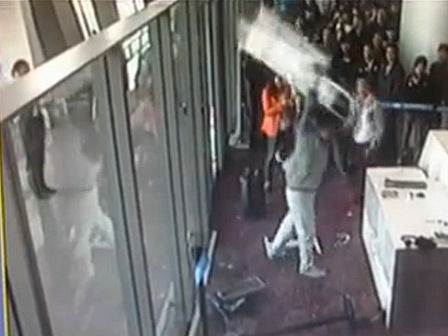 A Yunnan mining official has been suspended from work and could face criminal charges after being caught on video destroying an airport check-in counter.

Yan Linkun (严林昆), deputy chairman of the Yunnan Mining Corporation, was suspended Saturday after a security video of him smashing computers and generally throwing a fit was posted online. He will also face disciplinary action from the Qujing government, to which he is an advisor.

After arriving late to Kunming Changshui International Airport for his flight to Shenzhen, Yan rebooked tickets for him and his family for later in the day. He failed to show up on time for the second flight as well. Upon hearing he would not be allowed to board, Yan screamed at airport staff and then smashed two computers.

Oddly, although airport security staff can clearly be seen in the video, no one attempted to stop Yan after he began destroying things. He was not arrested but Kunming police are considering whether Yan will be charged with a crime.

Video of the tantrum has gone viral on the internet and already spawned its own Baidu page. Yunnan Mining Corporation officials were quick to suspend Yan and ordered him to apologize. In a statement released over the weekend, Yan said:

I failed to be a qualified political adviser as well as a good father...My irrational actions and rudeness have caused some losses to the airport as well as bad effects to the public, so I sincerely apologize to the airport and public. I am willing to compensate.

Kunming's airport has been generating a lot of publicity this year, most of it bad. In January, dense fog led to hundreds of flight cancellations that stranded thousands of people. More recently, police used pepper spray to subdue unruly passengers who tried to break through a security gate.

Editor's note: GoKunming would like to thank user Chingis for originally posting the video of Yan in the forums section.

And again it can be seen, there are lot of mentally retarded people in the departments! I just can laugh about the rich talking ... saying farmers are uncivilized. I know the countryside well and must say, that are two different worlds. They are much more civilized than this "poor" rich piggie-pigs. On top of that, the village folks are warm-hearted and rich of knowledge about nature. ;)

Intersting that they say "... MAY face criminal charges".

...My irrational actions and rudeness have caused some losses to the airport....

I also would be irrational and stopped the man(knowing myself).I really don't understand from my perspective no one interfered.But I know China and that's why I understand this can happen.May face criminal charges...he will.

",,so I sincerely apologize (after my company suspended me, threatened to fire me and ordered me to apologize). I am willing to compensate."

A stiff apology is a second insult.

No, man, you are perfect, perfect as a qualified politician, apolitical adviser and can be a great General, a diplomat, SIR!(salute)

where is that little island in the water east of the your beloved motherland? go, go, go.

It's obvious some Chinese officials can't adapt to the real world of business rules and regulations, let alone diplomacy. They're used to having it their way and only their way.
We, as foreigners trying to do business here in China know this in an intimate manner.
Now that China's smaller regions are opening up to direct business will hopefully weed out this totalitarian practice.

This official's ego is well reflected in this video, he's totally oblivious he's out of his little empire, an idiot out of touch with the real world of business.

His apology was obviously made within his little empire adding to his ignorance of today's information technology..

The Government's face will prevail...he's done..

Wow, this is rich! I can see why this video went viral. More than another "Officials Gone Wild" clip, to me it's a fascinating window into how people react to things around here. I enjoy people-watching and guessing what they're thinking. A few details I found most interesting:

0:19 Uniformed guy behind counter clearly does not want to deal — he fidgets, then walks away (whistling?), leaving the female airline employee alone with the lunatic. He later walks back into frame, but stays behind the rope line, passively watching as hell breaks loose in front of him.

0:41 The wife/mother immediately gets on her cell phone. (calling whom? a higher up to come fix their problem?)

1:15 pointing directly at face — the most extreme insult short of striking someone?

1:21 Two other uniformed people arrive, and join their colleague in staring from behind the rope, only moving to step back when shrapnel starts to fly.

1:56 Camera pans to a wider angle, showing large crowd gathering, spectators moving in for a better view of the action.

2:18 Older son tries to stop Dad, then thinks better of it and slinks away with head down.

2:39 Older son again tries to intervene, placing Dad's bludgeon down, out of harm's way. (btw, Dad bludgeons like a girl, no?). (My heart goes out to these boys, who are clearly embarrassed, but don't know what to do. Can you imagine what their schoolmates are saying after seeing it all on the internet?)

2:43 It's interesting that the man who finally steps in to intervene doesn't appear to be an official. Could he and the woman who joins him actually just be citizens doing what's right: talking some sense/shame into them?

3:30 Dad shows the intervener his ticket, still in disbelief that they won't let him on the plane after he's gone ape s..t (or just trying to save face at this point?)

3:36 Random woman in yellow shirt casually walks through the crime scene, then stands in the front row expressionless, with hands in her pockets. Just wanted to get a closer look?

3:47 Just for good measure, Mom smashes something too — perhaps to avoid awkwardness later at home (or in jail) when her husband asks her why she didn't do anything to help.

This video's ripe for a soundtrack, with actors voicing each character's thoughts, like cartoon bubbles above their heads, don't you think?

I know exactly how this guy feels...But had this happened in the good ol' US of A, the TSA would've tased him several dozen times.

Another fine exampe of the efficiency (or extreme lackthereof) of Chinese police and security forces. I think that should this have happened in almost any other country, the security forces would be walking towards the man; not away. Try this in Tailand and watch 20 baton-weilding security members "subdue" this man with extreme prejudice.

It's nice to see somebody finally getting angry for a change. However, bet he really lost some major face over that one...Well at least his companion got her 2 cents in at the end. Yet by national standards, this is still all too tame. How bout the Youku video of the traffic incident where one lady gets pissed at another? 1st party gets out of the car to quarrel with the 2nd party, 1st party is too slow on the draw, gets caught in her own opened door as the 2nd party proceeds to bulldoze the two of them into oblivion. Or wait, how bout the Youku video where there is a child laying in the street, in Guangzhou I believe? "Unbeknownst" to passing pedestrains proceeds to get run over several times by a myriad of different vehicles, eventually died in the hospital due to injuries. Or wait, how bout the pictures taken of a rebel town administrator after being "hit" by a dump truck? His body plummeled into the ground and broken at the neck...Or wait...Jimi had it right when he spoke "big deal" as his guitar screamed out the melody to "and our flag was still there". Better take care of your own in this world, sure as hell no one else will.

or the one where the lady takes her pants off and beats a cop with them till he passes out !!

With the smell or the force of the blows?

AHAHA yeah its classic!!! Its on chinasmack.com ..

here is the link..you guys are in for a treat!

Hey, no problem, I really am only joking...definetly an interesting video. It's just sometimes my stuff gets booted off here for no obvious reason, so I thought I joke about it. Makes me feel like I'm living in America, home of the free and the brave and all that good stuff, hehe.